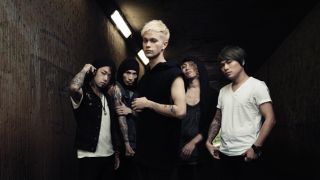 On the tiny Red Bull stage at last year’s Download, as rock and metal’s heavyweights were busy dominating the main stage behind it, something rather unexpected happened.

Amid the array of noobs still clearly finding their feet and scene veterans slogging it out for yet another round, one beacon of undiluted charisma suddenly appeared. A man whose star appeal was unquestionable, who quickly captured everyone’s attention and swiftly abolished any prior plans to check out another stage or sneak off for a wee. This man was Masato David Hayakawa, the frontman of Coldrain. Although they may have made limited appearances on UK soil, this was far from their first rodeo. Being active for six years and having four albums to their name, in the band’s homeland of Japan they are a very big deal indeed, regularly playing sold-out shows to thousands of people. Amid the chattering, excited metalheads who left the tent that day, another step was taken towards global domination, and with a slot supporting mainstays Papa Roach on a UK tour on the horizon (including a stop at London’s impressive Roundhouse venue), you’d be a mug to bet against them now.

“Do we want to emulate our success in Japan in other countries? Definitely,” says a clearly ambitious Masato. “If we can get that all over the world, I’d be so happy.”/o:p

Like many budding superstars, Masato’s first musical introductions came at the hands of an older sibling – his pop and r’n’b-obsessed brother, no less, whose love for the chart-bothering heavyweights of the 90s made an impact of the showy young whippersnapper. A great singer from a young age and star power made flesh from the get-go, a career as the Eastern Justin Timberlake seemingly beckoned, before being nipped in the bud pretty swiftly, however, when Masato stumbled across a familiar, potty-mouthed chap with a penchant for red backwards New York Yankees caps.

“I grew up listening to Michael Jackson, Mariah Carey, artists like that,” explains the singer. “Then when I was in Junior High, 1999 I think, that was the first time I saw Limp Bizkit on MTV. I was on vacation with my parents in the US and I saw the video for Nookie. I instantly thought, ‘Shit, that is what I want to do.’”

The nu metal explosion was just as big in Japan as it was in the US and UK, and just as the likes of Of Mice & Men, Bring Me The Horizon and While She Sleeps will point to those globe-conquering heavyweights of the late 90s and early 00s as inspirations, the influence they had on the young Masato was vast./o:p

It wasn’t long before he had formed a band of his own and was regularly gigging himself, playing the clubs of his local city, Nagoya eventually crossing paths with another local band who, in a Guns N’ Roses style-merger, soon saw their members being plucked from the fold. From those two bands, five guys who wanted to take things to the next level stepped up to form a new musical force, and Coldrain was born.

“We grew up playing in schools, and most of the teachers and parents hated it,” laughs the frontman. “[From there] we got to play a lot of local gigs. The city we grew up in is the third biggest in Japan, so we got pretty good shows starting out. It’s weird in Japan because you have to pay to play gigs, and it kills a lot of artists. You try to find ways around it, like playing in the street and giving out demos. We’d go to ton of shows and give our demos to people outside the venue.”

Being in an up-and-coming band with dreams of making it is never easy for anyone, but having to cough up money just to play shows really puts things into perspective. From here on we may be less sympathetic of UK bands moaning about having to eat at Little Chef three times a week while on tour. However, the pestering of people with their demos paid off big time, as Coldrain’s star soared in their homelands, and with a metal-infused post-hardcore sound that was enigmatic and a novelty for bands from their country, they soon attracted a whole host of fans from different scenes and found themselves with a large following.

“It was weird starting out, but people got used to us not being in any scene,” explains Masato. “There’s always been a big Japanese punk scene, and we’d play with those bands, but we weren’t in it. We weren’t in the J-Rock scene or visual kei scene, and we’ve never been in the pop scene. So I think we’ve taken kids from every other place and connected them together. So, in some ways, we’ve made a new scene in Japan and I’m hoping it grows.”

With Japan ticked off the list, it’s definitely time for them to turn their attentions to the rest of the globe, and there has arguably never been a better time. While Japan has often struggled to produce bands with real crossover potential – X Japan and Dir En Grey being among the only obvious exceptions there – the tide is starting to turn. Crossfaith have been blowing minds live for a few years now, not to mention Babymetal becoming one of the most talked-about phenomena of recent times. There was a time when these bands’ success stories would be unlikely even in Japan itself, but there is now a blossoming scene developing for the whole world to see.

“It’s something that I never grew up with, but there’s definitely more bands doing heavy music then there ever was [before],” says Masato. “Japanese music has always been known for pop culture, but it’s cool that people are recognising Japanese bands for the good music they’re writing, and the good shows they’re playing. I think in the long run we’ll be able to change how Japanese people think about themselves. A lot of people don’t think being Japanese is cool, they’d rather be Western, but it’s cooler to represent yourself and where you come from.”

Their music is looking to connect with people in their homelands by embracing their own culture while also looking to the influences of the US and UK metal scenes to help it grow. With Masato being half-American, he made the decision to sing in English, something quite unique in Japan, as he set out to make music that encapsulates both sides of his personal heritage. It sees them combine an Eastern charm with Western sensibilities, writing music to resonate with everyone, regardless of the country they may be from.

“We’ve always tried to get our message across,” explains the Nagoya native. “We’ve always tried to put translated lyrics in the books with CDs, we’ve put subtitles in our videos and I do a lot of talking at our shows. A lot of songs speak for themselves; people get what you’re trying to say when you’re writing the right songs.”

While there are risks of people thinking Japanese bands may be too niche, or in the case of Babymetal, merely a novelty act, any attempts at placing a glass ceiling over Coldrain will find it smashed in no time. Packing big riffs with the sort of skyscraper choruses that give many of their western peers a run for their money, they’ve created the perfect soundtrack for the huge venues the band play in Japan, and there is no reason why it can’t be replicated on the shores of the UK. Put plainly, this band could actually become one of the biggest Japanese rock exports of all time.

Furthermore, with Masato front and centre, they have the perfect man to lead the charge. A natural frontman who holds himself on stage with the notion that rock stars are alive and well and he’s living proof, he’s the kind of character it’s easy to imagine becoming a globally recognisable superstar. It’s a notion that may seem far off to Masato, but it is an idea that is ever-present in the back of his mind.

“I’m not going to say I’ve never dreamed of being as big as someone like Corey Taylor, but it’s never been realistic to me,” he explains while pondering his star-in-waiting status. “I’ve never thought of myself at that level, but I never thought I’d play in front of more than a hundred people. I’ve ended up doing this for six years and playing countries I’d never imagined [I’d play]. I think if you continue doing what you love, and believe in what you’re doing, if it’s meant to be, it’ll happen.”

There may be an eternal panic over who’s going to headline festivals in the future; the superpowers of rock we’ve become so reliant on will have to call it a day sooner or later. This means everyone is in search of the next global phenomena, but perhaps not enough people had been looking a bit further East for the next big thing. If there is a man that can change that, it is Masato David Hayakawa./o:p

Masato picks out some other heavy Japanese bands making waves.

“They’re a mixture of metal, nu metal, reggae, punk, ska. They’re like a new-generation Skindred, a mix of everything.”

“They’re a hardcore band who have a singer who can scream world class, and they’ve done a cover of Rollin’!”

HER NAME IN BLOOD

“They’ve been doing really heavy stuff in front of all these kids that probably haven’t even heard someone growl before.”

“Some people might have heard of them but they made post-hardcore really big in Japan. They should be more recognised worldwide.”