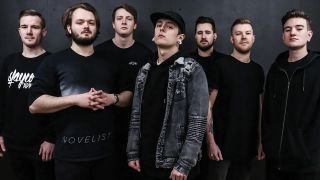 Sounds Like: A thought-provoking serving of progressive brutality with smatterings of melodic metalcore.

For Fans Of: Our Hollow, Our Home, Landmvrks, Annisokay,

Gloucester. The cathedral city of the picturesque Cotswolds. It’s probably not a place that you would expect to be coursing with existential angst, but The Uncharted are evidence to the contrary. Formed from the ashes of previous endeavours and with a vision of combining the best elements of their favourite genres – from deathcore to the expansive sounds of Coheed And Cambria – the result was their debut EP, Perspectives. Bursting with soaring melodies and electronic ambience echoed by guttural screams, all five tracks leave an impression long after the first listen. But as more details on the band’s conceptual creation are revealed, it emerges that hidden within what you believed was the only story, lies another.

“I wanted an idea that was like a metamorphosis in a person – how they started out in a really dark place but were determined to change things in their life,” explains vocalist Arron Carter. “But then you’ve got the emotions in each song that apply to us, too. For example, Deathdrive refers to one of us coming out of an incredibly toxic relationship and then struggling to get back on their feet. So, although it’s a story based around an unknown character, it’s all got our own individual emotions that we’ve experienced behind it.” So is this a case of life imitating art? “Absolutely. We all suffer in our own ways – that’s why I see it as such a powerful thing,” agrees co-vocalist Peter Lee. “If you dig deep enough into an emotion yourself, you can uncover it for someone else. That was really the aim with Perspectives – we want people to be able to experience that same catharsis through our music.”

By tapping into their own personal struggles, this seven-piece have not only managed to traverse that unknown path successfully, they’ve convinced countless others that theirs is a journey worth watching.