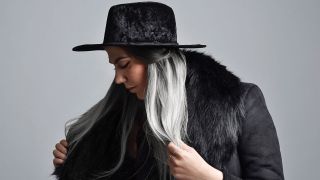 Louise Lemón is no Sister Act, but her darkly mysterious sound has earned her a seat at the church of a growing movement that is going under the moniker of ‘death-gospel’. Her harmonious debut, Purge, is packed with songs not about faith and devotion, but heartbreak and deception. The Swedish songstress’s haunting edge has been further sharpened with help from her band, featuring former members of underground favourites such as Primal and Mother Of God, not to mention bringing in sought-after US producer Randall Dunn.

If Randall’s name isn’t familiar, his production credits certainly will be. He’s worked extensively with experimental, drone and post-metal artists, including Sunn O))) and Earth, and also produced Myrkur’s excellent Mareridt. When it comes to analogue and vintage equipment, he’s the man, and his technical know-how has helped bring a more deathly pallor to Louise’s dirges.

“The word ‘purge’ is about cleansing and the theme is very heavy and very dark,” says Louise. “We recorded it ourselves, so we really wanted a new set of ears to mix the album; we wanted someone who could put those darker feelings across. I really like the heavier bands Randall has been working with and I wanted that heavier feeling to come into my work. He’s really transformed the tracks and opened them up.”

While working with Randall, she very nearly got to meet one of her musical heroes as well. Just one week before, he’d been wrapping up Dead Magic, the latest, spinetingling opus from fellow singer-songwriter Anna von Hausswolff. Although the two Swedes never got to meet, it’s something Louise would love to happen.

“It’d be great fun to share a stage with Anna,” she gushes. “I’ve been listening to her since her first album and I really like what she’s doing. The way her music is evolving is very interesting and I think she is moving more into an art space whereas I’m more into making focused songs.”

Despite her stylistic reservations, Louise has earned comparisons to Anna and fellow Randall Dunn alumni Chelsea Wolfe and Myrkur. Her reverb-heavy, and occasionally claustrophobic, sounds will send shivers up your spine, which could have something to do with her unusual choice of recording space. Purge was tracked in a haunted cabin in the Swedish woods.

“We built a studio in a small cabin in a very eerie setting in the northern part of Sweden. It belonged to my keyboardist’s [Anders Ludwigsson] family and we had to take a boat to get all the things there. It was very secluded, with no cell phone reception, but I think when you’re close to nature like that, you feel like you’re in touch with spirits and you reach a place where you can connect with your higher self,” the singer explains cryptically. “The area [Dalarna] has a lot of music history and it’s one of the oldest places in Sweden. You can feel that atmosphere when you’re there and it was a very nice way to record. It was very different from working in a studio and it really set the tone of the album.

“The last song we wrote was [opener] Appalacherna, and we actually wrote it in the cabin. It’s about a relationship with someone who doesn’t give anything back and I think it sums up the album since it’s both the ending and the beginning of something new. I write a lot about heartache; it’s one of the strongest emotions, almost stronger than love. If you’ve been through something and you write about it, you own it. It’s empowering and I want the audience to feel emotion when I’m performing it.”

Although Louise has been singing her heart out since she was just five years old, it’s taken her the best part of 10 years to transcend from an underground blues artist to the death-gospel power-house she is today. Her second album shouldn’t take quite as long, though, as she and Randall Dunn have already begun working on new material together.

“We’re doing the full-on producing and recording from scratch,” she says. “It’s coming along great and I’m really happy to be able to continue our journey and evolve together.”