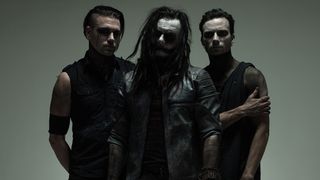 Industrial innovators Mortiis are releasing their remix album The Great Corrupter on April 21, via Omnipresence Production. Featuring remixes from the likes of Merzbow, Die Krupps and more, Metal Hammer is exclusively streaming Godflesh’s remix of The Great Leap.

The Great Leap is the opening track on last year’s full-length The Great Deceiver, which forms the basis for the new album. Mortiis himself discovered Godflesh in 1990 and subsequently went on to share the same record label for some years, but the two bands have never actually met face to face. Describing Godflesh’s The Great Leap’s remix as “totally old-school”, it’s an ethos that influenced a lot of the material on The Great Deceiver.

We had a quick chat with Mortiis about his love of Godflesh, the idea behind the album, and the state of the industrial scene in 2017.

Why did you decide to release a remix album?

“I just always really liked the idea of letting other people mess around and rearrange my music. I’m not much of a collaborator when I create the original songs – I’m pretty dead set on my ideas and concepts at that stage – but once I’ve gotten my own ideas into actual songs, I am always open to alternative interpretations. It’s just fascinating to see certain elements of the music I haven’t thought of become the basis for new versions of the same thing. One song can have so many personalities going on at the same time.”

How did you get Godflesh involved in the project?

“Godflesh were one of those bands I heard in the early ‘90s that sort of blew my mind. I wasn’t ready for that kind of brutality back then, I was too young and too close-minded. I think I head Streetcleaner when it was released around 1990, back in the days when you had to take your chances and buy LPs based on their cover artwork alone! I knew Earache Records already, and I was a fan of most of their bands so getting the Godflesh LP was a no brainer, but I didn’t realise their brand of heavy was going to turn my brain into a pretzel. It would be a few more years before I really understood this type of crossover music. Godflesh are just one of those bands that you never forget. Years later I was emailing with Justin about maybe doing a remix for a project, and eventually we made it happen.”

What is your relationship with those guys? Have you known them for a long time?

“I’ve only emailed with Justin, and so far we’ve never actually met, but he seems to be a lovely guy from the emails. We share several experiences and feelings at an artistic level, which I can say about several other artists on the record too – it’s nice to know that some of us are not that different as human beings, even though musically we may be quite different.”

How did you get other bands involved on the album?

“Just by reaching out to people. A couple of them, like (German industrial metallers) Die Krupps, I had to reach out to some middle men, but everyone was as pleasure to work with. No rockstar attitudes or crazy money requests, nothing like that. I started the project in the fall of 2016, with the idea to put out a deluxe version of The Great Deceiver, with maybe 4-5 bonus remixes, but true to form I took a small project and made it huge. It wasn’t intentional, I just wasn’t able to pull back and go ‘Okay, that’s enough.’ I kept going until I realised that this had become something totally different, and much bigger than what I had planned. The mixes started pouring in, and they were all really cool, which obviously was one of the reasons I felt so energised about it, and just kept going.”

How did you choose which band remixed which song?

“For these kinds of projects I try to let the band choose. I don’t want to force material on anyone that they may not personally feel inspired by, so for the most-part I’d ask them to check out the The Great Deceiver and let me know which song they wanted to tackle.”

How do you feel about the state of industrial metal in 2017?

“This is where I turn into kind of a weirdo. For a long time I haven’t been a fan of current music. I´m just very nostalgic, and I grew up on hard rock music, so that’s what I return to if I want to listen to music these days. I really like creating this crossover between metal and industrial (for lack of a better word) music, but I have to admit I don’t listen to a lot of it unless it’s older. I’m probably very cynical and unfair to whatever is happening right now, but I’m one of those guys that just grumbles on about how things were better in the past. I should probably be sitting on some park bench yelling at the kids for being too noisy, ha ha! My gut feeling, though, is that people are too caught up in trying to be ‘current and modern’, at least in music that is created by lots of electronics. I never cared about that, I just stuck with the time period I prefer for music and focussed on that. I don’t care what is current in 2017, I always existed in my own sphere and that works for me.”

Mortiis’ remix album The Great Corrupter is on sale April 21.

Mortiis will be touring the UK with PIG at the following dates:

Why has Mortiis come back from his crypt?