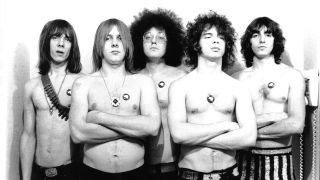 Having ripped through the Detroit live scene like wildfire, the band released a pair of independent singles across a two-year period (I Can Only Give You Everything b/w One Of The Guys, Looking At You b/w Borderline) through Trans Love Energies on AMG and A-Square respectively. Repeat pressings and a burgeoning reputation for live shows that combined the spiritual with the seditious soon attracted Elektra Records, who signed the band in ’68.

But the 5’s essential magic wasn’t best served within the cold confinement of a recording studio, as guitarist Wayne Kramer explains: “Playing live was what we did best. Most bands did three albums and then a live album, so we thought we’d be revolutionary and break out with a live album first. It also worked better for the label. MC5 didn’t know how to work in the studio, so a studio record could have cost Elektra a fortune and been a lengthy, gruelling process.”

Consequently, the Kick Out The Jams album was recorded live at Detroit’s Grande Ballroom across two nights on October 30 and 31, 1968 and captured the band at their most inspired and inspiring.

From Brother JC Crawford’s rabble-rousing opening ‘testimonial’ rap, through the libertine excesses of Come Together, the proto-punk ack-ack assault of Rocket Reducer No.62 and the taut, zeitgeist-mirroring passion of Motor City Is Burning to the spiralling space-rock blaze of Starship (co-credited to Sun Ra), it delivers sweat, volume and passion in spades, but is probably best remembered for its notorious title track with its unforgettably controversial introductory exhortation to “Kick out the jams, motherfuckers!”

Before we deal with the repercussions of Motherfuckergate, which we surely must, let’s examine the story behind the song behind the profanity. At this point in time every one of the band’s original compositions was simply credited to ‘MC5’, but who actually wrote it?

“We were commune-ists,” Kramer says laughing. “We had this all-for-one, one-for-all… I hesitate to call it a business structure. We just saw ourselves as one unit, but it was [vocalist and lyricist] Rob Tyner and I that wrote Kick Out The Jams in the kitchen, smoking a joint.”

KOTJ still sounds like a statement of intent. A forthright four-word manifesto, hammered home with an attention-grabbing, exclamatory ‘motherfucker’.

“Tyner was really speaking to us, the rest of the band. Sometimes I was critical of him, and what he’s saying is: ‘Let me be who I am.’ Because who he was was fantastic. He was your dream lead singer, and he wrote lyrics that work so well, on so many levels. What do we mean when we say ‘Kick out the jams’? If you’re going to do anything, do it full measure, don’t equivocate, be all the way in.”

On another level, KOTJ is an entirely punk statement. Possibly the first. Eight years prior to the Sex Pistols, here was an exhortation to set aside complacent noodling for short, sharp shocks. To quite literally kick out ‘the jams’, of which there were plenty in the MC5’s contemporaneous late-60s music scene, not least from the Grateful Dead.

“They were the recipients of much of our harassment,” Kramer says. “All those San Francisco bands, we were tough on everybody. This was the era of the twenty-minute guitar solo, the forty-minute drum solo. The MC5’s roots are in Little Richard and Chuck Berry. That’s where we were based and everything grew out from there, and we went from Little Richard to Sun Ra, all wrapped up in the era of Vietnam, civil rights and youth rebellion.”

And so to the ‘motherfucker’ of the matter. It was certainly a noun that provoked a reaction. So how quickly did the situation escalate from offended Elektra executives to the MC5 being dropped by the label?

“In the blink of an eye.” says Kramer. “We knew ‘Kick out the jams, motherfucker’ was never going to get played on the radio, so we recorded a ‘Kick out the jams, brothers and sisters’ version for the single. We instructed Elektra to wait until it peaked in the chart before releasing the album. Because when the album’s released the shit’s gonna hit the fan, but we’ll have won already by having a hit single. Well, once they saw the single taking off they rushed the album out. And when kids came home with this record and mom and dad heard ‘motherfucker’, you could hear the outrage reverberate across America.

“Elektra asked us, could they put out a clean version of the album. We said no and they did it anyway. We’d already had a major disruption in our relationship, and then, because our contract said we had control of our advertising, and a local store refused to carry our records and we called them on it in very graphic street language and sent Elektra the bill [Detroit’s Hudson’s department store refused to stock MC5 product so the band ran a full page ad in a local underground paper that read simply ‘Fuck Hudson’s’ and included, without permission, Elektra’s logo]. That was the final straw and Elektra fired us.”

The 5 subsequently signed to Atlantic and made yet more history, but even now, 50 years on, Kick Out The Jams retains its vital intensity.

“I never tire of playing it.” Kramer enthuses. “It’s exciting every time. Even acoustic. Excitement’s built into the song’s DNA. There’s no way to play that song and be boring. It can’t be done.”