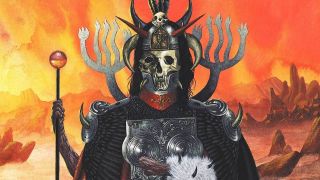 In a long fought battle, Mastodon have claimed the prize as the best album of 2017 so far. As you can tell by Metal Hammer’s Top 50 Albums Of 2017 So Far, it’s been quite the year for heavy music with incredible music from the likes of Pallbearer, Code Orange and Kreator taking over our stereos for the past few months. But when we asked the general public for their choice, it was clear which record hit hardest with metalheads around the world.

Here’s what Hammer’s review said at the time of release back in March, which rewarded the album a 9⁄10 score.

“This is music Mastodon needed to write: powerful, passionate metal written and performed by one of the most creative and ambitious bands in our world, and carrying such a weight that it’s capable of levelling mountains.

“With more in common musically with Blood Mountain and The Hunter than 2014’s hit’n’miss Once More ’Round The Sun, there are riffs here the size of planets pushing the metal ever onward with a spiritual spine to juxtapose the heaviness.”

And it appears that Hammer readers agree. Here are the top ten albums from 2017 so far as voted for by you.

It’s quite the range of sounds and sub-genres being represented in the top ten, from metalcore and horror-punk to industrial and old-school thrash. No matter where your tastes lie, it’s safe to say that this year is serving up some delicious goods to feast on. Just imagine what the next six months are going to bring!