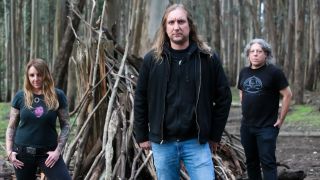 Stoner metal pioneers Acid King emerged when the subgenre didn’t really exist yet. There were doom bands, and there was a few bands playing what would later be dubbed “stoner rock” and “stoner metal”, but the style had not yet been hugely popularised (Kyuss and Monster Magnet’s big breaks were yet to happen). Acid King, along with the likes of Sleep, were one of the first. Now, the band have made their first album in over a decade, Middle Of Nowhere, Center Of Everything. They’ve also made a suitably psychedelic video to accompany the song Red River from the album. Hammer spoke to singer and guitarist Lori S. about interpreting the meaning of songs, Desertfest, why the doom scene is so vibrant right now, and, er, David Bowie.

Did Timothy Plain, the video’s director, interpret the song differently to how you wrote it?

“Yeah, he did – definitely, he did. It probably wouldn’t be something I thought of. But that’s OK, because it’s good to have a different perspective on things. Everything has been done before. Do you really need to see me playing in a split screen, or a psychedelic background with watercolours again? I like the fact that it’s different. It’s made by someone who’s really not even into this kind of music, who’s not even really into metal or heavy music at all, and he made that video based on the way he felt when he heard it. It was a completely different way of doing it – which I like, because we could have made the same old, same old. It’s nice to have something that’s totally different.”

Would it be fair to say this is one of the more expansive, psychedelic songs on the new record?

“It’s definitely longer! Although Silent Pictures is pretty long too. It’s very monotone. It was influenced by David Bowie – I’m a huge David Bowie fan, I love Low, I love Warszawa, and a lot of that stuff in there, those beats, were influenced by that particular song. It’s something that you phase off into it while you’re listening.”

What can we expect from your upcoming Desertfest set?

What would you tell someone who has never seen Acid King before to expect from you live?

“Expect to get your ears blown out.”

How much of the success of stoner/sludge/doom in recent years, both creatively and in popularity, is down to how well it translates live?

“This kind of music is a feeling. It puts people in a mood, they get into it whether they smoke pot or not. Because of the rhythm, because of the tone – and it’s loud. When we play live, and you listen to our records, there may be some things – like there’s one song we don’t play live because it’s a little difficult to pull off well – but for the most part, all of our music sounds exactly like the record. It’s not like there’s a bunch of crap on the record that we can’t replicate live, so you’re hearing the same thing. When you see a band and they don’t sound like the record, you think, ‘What the fuck? Is that studio trickery?’ These kind of bands don’t have that. So when you see the band it’s even better, because you have the amps and the whole atmosphere – it’s more atmosphere music, it’s not about the look. Who’s good looking in this music? No one’s going to gigs because someone’s hot in the band! It’s the feeling of that bass ripping through your gut while you’re standing in the audience, the whole tone and the atmosphere, that makes the live music so important, and such a big deal.”