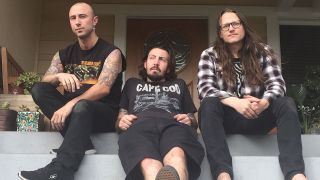 LA alt-rock trio The Primals are an intriguing proposition on paper. Helmed by John Henry of DC death metal mainstays Darkest Hour, their debut album, All Love Is True Love – released via Southern Lord on September 07 – sees them call up garage punk overlord John Reis for production duties and, somewhat unexpectedly, create one of the best power pop records in years. That it's being released on America's premiere underground metal label might sound like one of your more frenzied fever dreams, but trust us: the results are every bit as gleeful and brilliant as they sound.

Channeling Redd Kross' soaring harmonies, The Posies' taste for sugary darkness and Kurt Cobain's ability to disguise an arsenal of irresistible hooks under a barrage of pounding fuzz, the album rips up grunge's 90s roots and replants them for a modern audience.

We caught up with the band to get the inside stories behind the album, one track at a time. You can hear All Love Is True Love in full below.

"This was actually the last song written for the album, so naturally we put it first. It has a more nonlinear approach than most of the other songs and features a baritone guitar. It sets a bit of a dark tone with the first line 'If I know what I know, then I know this world is cruel' but like the album that follows, it continues to weave in and out and up and down emotional and musical spectrums."

"To be honest I don't remember what the first part written of this song was. Its working title was Predator For A Pet and was about a pet turtle. The lead guitar part got stuck in my head, that's probably why it reoccurs so often. Pretty sure this song is about monogamy and it's parallels with pet ownership."

3) Another World To Call Your Own

"This is the oldest song on the album and fitting because it's about living a life of monotony. A life where everyday is fresh, new, stale, and repetitive all at once. 'And when I wake up inevitably, I forget everything not right in front of me.' It's about my life with an ADD brain."

"This one came out of left field. Born from an electronic-y type demo, the beast was nurtured by the pulsating rhythm section and raised on heavy pop sensibilities. It continues to climb the charts like a sonic King Kong to this day. Featuring a magical organ from Engineer Ben Moore's private collection."

"The first single from All Love Is True Love screams at the wall that is the USA's inability to break free from its traditions of slavery, greed, and patriarchy. Naturally it's pretty heavy."

"John Reis had this sick idea to have us play faster and higher up the fretboard to tape and have Ben slow it down and it came out so cool sounding. This is the only song that's in anything other than E standard. Drop D to get technical on y'all."

"It's kinda funny because the lyrics to the song prior are way more personal than these. This was a really fun song to write with the most 'stream of consciousness' type lyrics on the album. Another more nonlinear track and also de-re-tuned."

"The last of the more upbeat sound of the album, this track lets you know the end is nigh with an optimistic spin. If we're all gonna die let's do it with goddam smiles on our faces holding hands, or fucking, or just hanging out looking at the trees."

"This song is about wanting to have a baby to save yourself from killing yourself. Pretty literal."

"The closing track brings the chaos back to a melodious end for me. It says it's gonna be alright and watch the fuck out simultaneously. The final lyric of the album says it all: 'I love you all, I wish you all the best in this life, I'll see you all in hell.'"

All Love Is True Love is released via Southern Lord on September 07. The album is available for pre-order now.