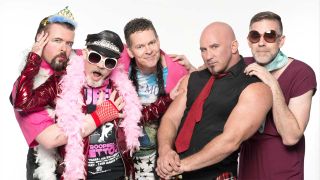 The riff is familiar. The guitar is the same. That distinctive, two-step shuffle is the one we're used to. But there's something a little different about this version of AC/DC's Problem Child. The guitarist is a giant, muscle-packed man with a bald head and rainbow-striped knee-socks. He's wearing a sleeveless black shirt, a bright red tie, and a Scottish kilt so short it barely conceals what lies beneath.

This, ladies and gentleman, in GayC/DC, Los Angeles's premiere all-gay tribute to AC/DC. And they've taken the songs of perhaps the globe's most heterosexual band, and turned them into something altogether more fabulous. Problem Child is now Bottom Child. Whole Lotta Rosie turns into Whole Lotta Jose. Dirty Deeds Done Dirt Cheap transforms into Dirty Dudes Done Dirty Cheap. And Big Balls? That doesn't need any help at all.

"I grew up listening to AC/DC, they’re part of my DNA," says drummer Brian Welch. "But that whole ‘boy/girl/boy bangs girl’ thing wasn’t something I could relate to. I wanted the songs to speak to me and that’s a big reason we started this band. Now, those iconic songs can speak to others who felt the way I did. And who can resist taking it to the most fabulous extreme! We love AC/DC. That’s why we do the music spot on, but have a bit of cheeky fun changing the lyrics around.

"I feel the same," says singer Chris Freeman. "For me, the whole experience of AC/DC is dripping with macho heterosexuality, and that part was hard for me to relate to. But I loved the music, that part I could relate to."

Freeman has a long history of kicking against the stereotypes, playing bass in the legendary queercore band Pansy Division since their formation nearly 30 years ago. Signed to Jello Biafra's Alternative Tentacles label, they toured with Green Day, wrote songs with titles like Pat Me On The Ass, I'm Gonna Be A Slut and The Summer You Let Your Hair Grow Out, and covered Judas Priest's Breakin' The Law, the lyrics gleefully adapted to flaunt US sodomy law.

More recently, Freeman and Welch (along with GayC/DC rhythm guitarist Karl Rumpf) played in The Gay-Gay's, a tribute to famed 80s girl group The Go-Go's. After performing at a party held by Go-Go's guitarist Jane Wiedlin, the trio decided to carry on with a new project, and GayC/DC were born.

"We started throwing out band names with ‘gay’ in them and I think it was Karl who said GayC/DC and I thought, ‘hmmm…,’" says Freeman. "Around that time, I met Steve (McKnight) and with his background in guitar shredding from being in Cry Wolf in the ‘80s, he was a natural to be our new lead guitarist, so then we just needed a vocalist.

"When no one we knew would even try out, I told the band that I would try out, but they had to be very critical. We did and they were very positive and encouraged me to do it, so then we tapped our friend Glen (Pavan) to take over for me on bass. That was nice, cos I would never have had the chance to be in a band with him otherwise!"

Since then the band have gone from strength to strength, gaining a boost in popularity after a video surfaced on YouTube in which the band shared the stage at the infamous Viper Room with former Skid Row frontman Sebastian Bach.

Gay culture has been embraced in pop music in a way it often hasn't in rock circles. Why do you think this is?

Chris Freedman: I’d say it started with rock and punk circles, before pop. David Bowie went for androgyny, Lou Reed and Mick Jagger flirted with bisexuality, Alice Cooper wore women’s clothing, then New York Dolls, dovetailing into punk. There were many gay people drawn to punk because they felt accepted, they could be themselves without worrying about getting beaten up. But perhaps we can thank disco for taking gay into the mainstream. Yuck.

Brian Welch: There were always clues, but nothing was overt. You just couldn’t say it out loud. Elton and Freddie Mercury pushed the limits of acceptability, but we were the ones that were in the closet, listening to Priest, Zeppelin, Sabbath, Van Halen and Accept. Some of these bands even skirted around the gay thing by wearing leather clothing and some of those song titles were rather titillating. I didn’t know at the time that a woman was writing the lyrics for Accept. London Leatherboys meant something entirely different to me than it did to my straight best friend, both of us being huge Accept fans.

"I think the hard rock crowd, especially the males, wanted to make sure their “boys only” club was so hetero, they didn’t see the irony in the make up, the women’s clothes, and teased hair. They thought they were girl magnets. But when you can’t tell Britny Fox from Vixen, your hetero look needs a makeover. And don’t be a homophobe if you’re dressed like that. Plus, we could help you pick out better outfits.

What are the best and worst reactions you’ve had to GayC/DC?

CF: We haven’t had any bad reactions, to be honest. We win them over every time!

BW: The best time was just last month in NYC at the Bowery Electric. Tons of people wanted photos of themselves with the entire band. And people always comment on just how spot on we are with the music. I think they expect a bunch of guys making a joke out of these songs and the band. No way. Our love for AC/DC knows no bounds, and every show is a love letter and a thank you to them. Plus, when Rob Halford and Doug Pinnick think you’re cool, you know you’ve done it right.

Angus Young’s school uniform is such an iconic piece of rock fashion. Were you tempted to retain it for GayC/DC?

CF: It is truly iconic and we could not just leave it without a reference. Steve wears a schoolgirl’s outfit with a shirt and tie and a tartan skirt that barely covers the cookies!

BW: But we did make a conscious decision to be the reverse of the AC/DC aesthetic, which is simply t-shirts and jeans. We wanted to use a lot of colour and exaggerate the bawdiness that is the spirit of the band. We thought such heavy music, but with feather boas, tiaras, glitter and mascara on big guys would make quite the statement. And Bon was no stranger to jumping in a frock. Just check out the video for Baby Please Don’t Go.

Have you had any official reaction from the AC/DC camp?

BW: Nothing official… yet. But when the video from the Viper Room of Sebastian Bach singing TNT with us blew up on YouTube, the link showed up on an AC/DC fan forum page. And we were quite pleased that most of the reactions were “right on!” We hope they know it’s all out of love, and we’re turning people onto their music who may never have been fans before.

CF: I’m sure they would totally be into this. We made certain that the music was right. We had to get it right or it wouldn’t be worth doing. The rest is dressing.

What did you make of Axl Rose fronting AC/DC?

BW: I wish they had given an unknown a chance, but after hearing Axl nail those tunes, I  see why Angus wanted him. And kudos to Axl for bringing some of the deeper cuts into the live set. Of course, when we do Touch Too Much, it takes on a different, er... flavour, shall we say.

CF: Hats off to him for taking it on and owning it. That’s a big spot to fill, I know. And he survived the whole tour! That ‘no-backing-down’ attitude is something I admire.

If you were to film a programme in the style of A Queer Eye, but about ageing rockers, which rock star would you pick, and why?

BW: Robert Plant: a nice hot oil treatment would do wonders! Ozzy: why has Sharon not done something about those split ends?!, and Marilyn Manson: we’ve always loved your look and love what you do, but let’s talk about throwing some new colours into the mix. Call us. But in all honesty, hats off to anyone over the age of 45 who’s out on stage, giving it their all every night. Because we are too. We certainly do salute you!

CF: Ha! I can’t top those! Well, maybe we can convince Gene Simmons to lose the raccoon and come see us for a consult.