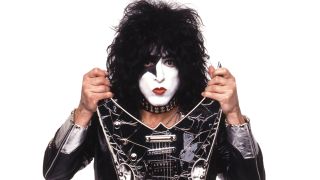 You’ve just published your autobiography, Face The Music. Is this your way of addressing the Kiss legacy?

Gene, Ace and Peter have all written theirs. But I didn’t want to write the fourth Kiss book, but the first Paul Stanley book. Kiss is central to a lot of things in my life but not all of it.

How do Gene’s and the others’ take on the legacy differ from yours?

I have to say I didn’t read all of their books. Gene is a classic only child, so over the years his perception of reality has become skewed. I took exception to some things in his book [Kiss And Make-Up]. The few bits people showed me from Ace’s [No Regrets] and Peter’s [Makeup To Break-Up] confirmed my worst thoughts. There’s a reason lawyers don’t put alcoholics and drug addicts on the stand. How can they write their memoirs when they can barely remember what happened?

There’s a line in your book that says you spent years “chasing approval, chasing acknowledgement and chasing love”.

It’s true. So many entertainers are seeking that. We’re all addicted to this unrealistic need for mass adulation.

What did you learn about Kiss from writing your life story?

I realised how hard we worked not to show our weaknesses and flaws. We created an image built around being superhuman, perfect people that could take all the pot shots and negativity and wouldn’t flinch. The trouble is the perception became the reality.

Is there an aspect of the band that always gets overlooked?

The simplicity of what we were doing couldn’t help but be overshadowed by the huge image. I never aspired to that image, though. My roots were going to see all these fabulous bands – The Move, Led Zeppelin playing to less than two thousand people – and being inspired by that.

So inside Kiss there’s always been a classic English rock band trying to get out?

Yes. It’s no coincidence that most of the bands I grew up on were British. That’s the foundation of Kiss.

Kiss have always presented themselves as superhuman, but did you envy other bands and think: “I want Kiss to be like that”?

Absolutely. I don’t know if I’d call it envy, though. That might be too negative.

I know. Those albums sold very well but, looking back, the problem is we weren’t leading any more. We were following.

Did you regret taking off the make-up back then?

I can’t say I have regrets. Everything led to the next thing. We’d taken off the make-up for all the right reasons but hadn’t found an equal replacement. And never would.

Would it be fair to say that your family is the thing you’re proudest of these days?

Totally. What I have now with my family is more than I ever thought I could have.

That strength doesn’t come from not flinching, but from being able to show your weaknesses and your flaws.

Is there anything you’d have done differently then?

I’d have not worn some of those clothes.

Absolutely. Whenever I feel bad about the eighties I can look at pictures of Gene.