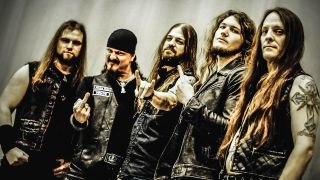 For the best part of 30 years, Florida metal heavyweights Iced Earth have been unleashing their brand of riffy power metal on legions headbangers around the world. Throughout their tenure, one man has remained a constant, lead guitarist Jon Schaffer. And as the band release their twelfth studio album Incorruptible on Century Media, we sat down with Jon to get the skinny the stories behind the music. From pirates to Vikings to Native Americans, there’s a lot going on…

“This was Stu’s idea for a song – the Viking Norse mythology resonates pretty deep within him, and when he said it was one of the directions he wanted to go in lyrically I totally got behind that. I knew early on it was going to be an opener for the album. To me it’s a pretty typical Iced Earth track; it’s got all the elements that we’re known for, it’s fast and melodic. The chorus part had a very victorious feeling, but when I added this lead guitar melody in there it adds some tragedy to it.”

“Our pirate song! This was a song I’ve wanted to do for a while and it was a challenge because it’s quite a history to tell in a four and a half/five minute song, but I think I pulled it off and it really worked out well. I’ve got a feeling it’s going to be one of the songs that will always be in the setlist. Luke (Appleton, bassist) came up with the intro, which is perfect musically, and Stu’s vocal performance is amazing on it – he really got into character. It’s full of vitriol, this isn’t a ‘Yo ho ho and a bottle of rum’ pirate song, this is heavy, it’s angry, and there’s a definite rage against the empire. I guess it’s a kind of common thread with me in general ha ha.”

“In Native American mythology, when a raven comes into your life it’s a message from the spirit world. There’s a really long story behind this one, but when you read the lyrics it’s all there. Over the next several years it’ll be one of the songs where people say it helped them with some heavy shit.”

“This was the last song I wrote lyrics for. I started with the idea of going in a completely different direction lyrically and the music kept pushing me somewhere else, and I made the decision on the Headbanger’s Ball tour that I was going to change it, and when I got home from that I had four days until the guys showed up. It came quick, it’s not a long song, I recorded a demo of the vocals so Stu would have a guide. He listened to it and we went back and forth. It’s a tragic love story, I don’t know where the idea came from but I guess the music pulled me in that direction. It’s turning out to be a pretty popular song.”

“Seven Headed Whore started with the title. I started thinking about the whore of Babylon, the book of Revelations, the apocalypse, so it’s my interpretation of that. I felt like the title warranted a blistering, kick-in-the-balls metal track, and that’s what we got.”

“This is an original story that Stu came up with and he told me about on the phone. I said I had a piece of music that would work for it, and he said it was perfect. It was the first song I wrote for this album, the first full arrangement that I did, and nothing changed with that. It just worked.”

“The idea of doing a tribute to the Native American plight and their spirit has been bouncing around in my head for a while. It went through different working titles. It’s been a while since we’ve done an instrumental song, and it speaks volumes. You don’t have to have vocals or lyrics there, you can feel it, and I feel it’s a really cool tribute to the Native American spirit and it’s all over – it’s in the drums, the riffing, the melody. It’s all there.”

“This was a piece of music that Luke sent me early, I thought it was cool, but I wasn’t really sure where to go lyrically. It ended up as an anti-bullying song, to inspire people to stand up for themselves and not be beaten or pushed into a corner. It should be inspiring for anybody who’s been through that and I think a lot of people have.”

“I thought about writing this for years; many years after my friend was killed I wrote this song. This has been there for at least 15 years and it’s a tribute to the Irish Brigade, more than it really is about The Battle Of Fredericksburg. Their sacrifice on that second day is pretty heavy. You think about guys fleeing the tyranny of their own country and heading to the United States, they’re looking for peace and prosperity, and they end up being recruited into the military as soon as they get off the ships – in the north and the south. Then on that fateful day in Fredericksburg they faced off against each other on the battlefield, the Confederates had the higher ground and the dominant position so the Union Irish Brigade just got slaughtered. I think 1200 started and 270-something finished, but as the Confederate Irish saw the flag of their countrymen come charging up the field, there were a lot of tears. It was pretty heavy. That’s the feeling I tried to channel in the music. It’s sombre but it has a certain glory to it all.”

The Top 10 Metal Bands From Florida