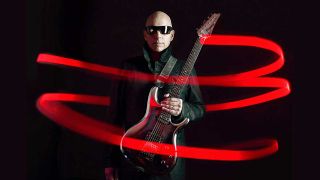 This guitar great’s enduring career was launched by his often-copied 1987 album Surfing With The Alien, leading to a slew of hit records, Grammy nominations, stints with Mick Jagger, Deep Purple and of course his supergroup Chickenfoot.

With his seventeenth album, Shapeshifting, tipping the hat to his heroes and his past, Joe Satriani tells us about the music that’s “always with him”. (Spoiler: he’s a Hendrix nut.

The first music I remember hearing

My parents would play jazz and classical, while my elder siblings were into Chuck Berry and Elvis, but the strongest memory is sitting in our 1949 Dodge car and hearing Santo And Johnny’s Sleep Walk on the radio. That always really brings me back.

The greatest album of all time

Electric Ladyland by Jimi Hendrix, for the breadth of the material, for how groundbreaking it was. What a wonderful invitation from Jimi into all the different facets of his creativity. 1983… (A Merman I Should Turn To Be)? Nobody was making those sounds!

There are several! A lot of them are my friends, and there’s an unwritten rule you don’t mention them, so it’s Hendrix. He excelled in so many categories: the natural musical ability, the originality, the complete surrendering to their art. He was in the analogue world – razors and tape, no digital – and he just got it done.

John Lennon. Partly because of when I was born and grew up. But he covered all those bases: he bared his soul, he tried everything and took risks. He could sing a love song but still scream like crazy

I’ll put Lennon, McCartney and Harrison together here, because the three of them changed the way songs were written. They wrote beautiful songs, funny songs, get-up-and-scream and crawl-in-the-corner-and-cry songs. It’s monumental what they did.

In the early eighties I went to see Mick Ronson play at the Old Waldorf in San Francisco. We were totally into everything he did with Bowie, and here he was in this tiny club with us idiots staring at him. We always thought he was the coolest.

The most underrated band ever

I was reminded of the Gang Of Four when Andy Gill passed away [in February]. Love Like Anthrax was an amazing song, so important in my development. I think they got into a lot of musicians’ heads and made them realise you can make a musical statement without copying everybody else.

The first song I performed live

Funk 49 by the James Gang, or maybe Volunteers by Jefferson Airplane. Either way, it was at Carle Place High School dance, New York, one Saturday night in 1971. I’d only been playing guitar for a few months.

The best record I made

Well it’ll be the new one, right? [knowing laugh]. As the memory of recording Shapeshifting fades, I can hear it as a listener, not a musician on the inside looking out. I’m working out all the parts for the tour and surprising myself with all the things we did. I’m very excited about the variety of music and guitar styles.

Hendrix’s Band Of Gypsys. It’s not a perfect recording, but I’m listening for the heart and soul. He changed the course of music in one evening. If it only contained that version of Machine Gun, that would be enough for me. That’s the Bible, the grimoire of electric guitar.

The worst record I made

My first EP [Joe Satriani], back in eighty-four. No bass, drums, keyboards. Just guitar, wrapping the pickups in foil and tapping them with an Allen wrench to get kick drum sounds. Some of the music’s sweet, and I love that it was avantgarde, but I have no idea why I thought people would want to hear that!

Every time I put Greta Van Fleet on, someone, usually someone older, will say: “Who are these guys ripping off Led Zeppelin?!” Give them a break! There are bands a generation older than them who seem to be doing it for the money and fame, but to me these guys seem to love this music and they have a real spark.

Casino Boogie from the Rolling Stones’ Exile On Main St. I love music when it’s pure, when you can forget about technique and it just puts a smile on your face.

The song that makes me cry

There’s something in John Lennon’s voice on Across The Universe. I guess it makes me think of him and his life as well as what he’s singing about.

My 'In the mood for love' song

Anything Mrs Satriani likes! You can never tell, it might be early Van Halen, which I love too. The early David Lee Roth stuff had that sexy, energetic appeal – all four of them going for it, you could feel that youthful energy.

The song I want played at my funeral

Honestly? I would suggest no music. My favourite sound is the wind in the trees. That light susurration is a beautiful sound. Music can push people’s buttons in such different ways. You think you’re playing the perfect funeral song, and half the congregation wonder why you’re playing their Saturday night song!

Joe Satiani's Shapeshifting is out now.