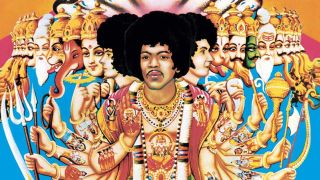 When Jimi Hendrix offered his insightful hymn to mind-expanding and altering substances in the shape of his 1967 single Purple Haze, the arrival of him and his band The Experience (bassist Noel Redding and drummer Mitch Mitchell) was perfectly timed to catch the wave of psychedelia that was travelling across the Atlantic from the USA.

The time was ripe for long hair, outrageous clothes, free love and political activism. Not to mention time for rock music to get a serious shape-up, thanks in no small part to Jimi’s creative vision.

Hendrix embraced the concept of heightened enlightenment to explore musical avenues and break down the barriers between cleansed, harmless 60s pop and the new revolution, melding and warping electric blues to carve out a pathway that would define the electric guitar and provides a blueprint for much of the music we hold dear.

At the time, Jimi was based in London, and legend has it that it was while hanging around with the likes of The Moody Blues, former Animal Eric Burdon and others in Swinging London of 1966 that he first got ‘experienced’ as far as taking hallucinogenic drugs was concerned. He used it to try to gain a deeper understanding of himself, of his spiritual self and of the musical world.

“I just used it for certain things, as a step towards seeing it both ways, if you like,” Jimi said at the time. He wanted his consciousness to be altered for all that it could bring him, and consequently that he could bring to his audience.

Hendrix didn’t think in the then accepted style of conformity and rigidity; he had always wanted to break barriers, to break moulds. Which he did, both musically, culturally and spiritually. He was a black man playing – effectively inventing – the rock guitar, clearing the way forward for anyone who has picked up a six-string since (or even those who were already playing – he totally freaked out Jeff Beck, Pete Townshend and Eric Clapton, to name but three).

It was Hendrix’s previous employer, none other than Little Richard, who managed to sum up Jimi’s ethos on life, and his subsequent rise: “He gave it all to you,” he enthused. “And that's what you want, isn’t it? You want it all.”

And all really did mean exactly that, from the incredible, over-the-top stage shows, to completely rewriting the book in terms of sound and what music can be, do and also go on to become.

Before the world had even heard the groundbreaking sonic mastery of Jimi’s debut album Are You Experienced?, he was already writing new material for its followup, Axis: Bold As Love. It took what he had started on Are You Experienced? to another level.

His mastery of the guitar was increasing, and after having been a side man for so long his creativity seemed to know no bounds. He had been living in the UK for less than two years at this point, under the guidance of his manager, former Animals bassist Chas Chandler.

Despite the early start on the new record, Jimi and his band were due to tour – taking in what became their legendary Monterey festival appearance in 1967, which would effectively bring their acid-drenched psychedelia to the world. The band did not return to London’s Olympic Studios until late in the year, by which time they were slightly older, wiser, and now with the substantial (pardon the pun) experience of well over 150 live shows.

They needed to capitalise on the success of their debut album By December of ’67 Axis: Bold As Love was ready to be released on an unsuspecting public. As well as sounding like nothing that had gone before, the record even looked different. Originally released as a sumptuous 12-inch gatefold edition, Axis… incorporated images of Hendrix, Mitchell and Redding into a shrine.

The cover artwork were psychedelic, and so was the music inside. Hendrix also came into his own in terms of the songwriting on Axis…. But what made the album so special, so unique, so beguiling, was a combination of the writing, new studio technology, the growing synergy between the musicians, and the often under-appreciated input of Chas Chandler.

“Chas was definitely in charge of production,” producer Eddie Kramer remembered. “Without Chas’s help I don’t think Jimi could have done what he did. I think Chas was an unsung hero in the whole career of Jimi Hendrix. He really helped Jimi develop. He was the man with the patience and fortitude to help him with his songwriting, to give him books on science-fiction to fire his imagination, and to sit with him day after day in his apartment and let him be creative.

Chas had a vision of what it would take to put Jimi on top, because Chas came from this background of the three-minute pop song with The Animals. In a way, that restricted Jimi. But I think it was a good kind of restriction, because it forced Jimi to think: ‘Okay, if my ideas are out here – six feet wide – I have to make them three feet wide; gather all that information and compact it into a little three or four-minute piece.’ That produced some amazing results.”

Those sci-fi novels also came in remarkably handy, firing Jimi’s imagination – along with the LSD he was ingesting. The opening of the album proper took its inspiration from these very novels: EXP had Mitch Mitchell and Jimi engaging in a fake interview, with Jimi playing the role of Paul Carusoe, a fictitious ‘expert’ on alien life.

But it was what followed that seemed more extra-terrestrial: opener Up From The Skies, with its alien sounds, and Hendrix imploring that he wanted to discover the contents of ‘the rooms behind your minds’; the enticing melodies and startling imagery of Castles Made Of Sand… The fantasy worlds that Jimi created and portrayed stood out like swirling Day-Glo colours on a relatively dull grey reality.

The songs’ far-out lyricism made perfect sense to those who were as stoned or as tripped out as the band were. The guitar wah-wah pedal, which featured heavily on Axis…, was a recent design innovation, was an effect that Jimi would make his own – even today he is considered its greatest exponent. But it wasn’t all surrealism and taking the guitar to brave new dimensions; there are moments on Axis… where you could be forgiven for thinking there was no experimentation going on, just good solid musicianship, the best example being the delicate craftsmanship and the truly sublime execution of Little Wing – a counterpoint to the cacophony that raged elsewhere on the album.

It’s here that Hendrix shows off his skill. He knew when to hold back, when it wasn’t necessary to try to subvert every musical convention. Seemingly unaware of the impact that it would go on to have, Jimi gave the sort of self-effacing reply when questioned about how successful Axis… would be to his – now not insubstantial – fan base: “And if the audience doesn't dig it, well, I don’t know, there's nothing else we can do.