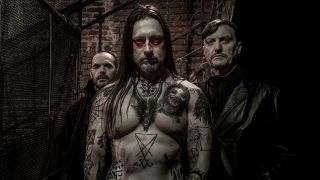 Much like turning off your bedroom light to reveal a host of sucker-wielding parasites that would make a lamprey barf slithering across your windowpane, the line between whatever psychological foothold gets you through the days and the convulsing terrors of the measureless void is thin and prone to malfunction.

Named after the mythical planet that, according to some who live amongst us, is about to herald either the rapture or whatever apocalypse you favour this Saturday, Turin’s Nibiru have been poking their heads past the threshold of reason for five years now. Listening to their albums feels like having been beamed down to an alien world where a whole set of different elements make up the atmosphere, and just over the next ridge some tribal ceremony is taking place where the leader chants Enochian to unknown deities and quite digs wildly psychedelic sludge.

Via the ever-pulsing portal that is Argonauta Records, Nibiru are about to let loose their fourth full-length album, Qaal Babalon, just in time to herald the end of all things on Friday September 22. Its four lengthy voyages into realms of eyeball-busting intensity add up to 58 minutes of the most jaw-dropping, mind-melting and ravenously rapt music you’re going to hear all year, and for those of you with a sturdy constitution, we have an exclusive stream of the album in full.

So without further ado, leave a note of your last known location, apologise in advance to your third eye and step out into the pitiless planes of Qaal Babalon below!