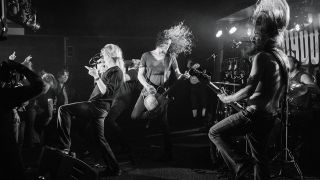 For every Download or Hellfest there's dozens – if not hundreds – of boutique festivals. They're often run on tiny budgets, and while you might not get the big names headlining, you'll get a much better view than you will standing halfway up a hill squinting at big screens in the distance.

The beer will probably be cheaper, the toilets perhaps less hazardous to health and safety, and with a bit of luck you can get the bus home afterwards.

One such festival is Croydon Rocks. The second edition took place at the weekend, described by organisers as "the greatest rock festival Croydon has ever seen."

“It’s the biggest thing in Croydon since, well, forever really," promotor Richie Hudson told the Croydon Citizen. "But I’ve got music in my blood and it was something that I really wanted to do to put Croydon back on the rock circuit map."

Back on the map, eh? We despatched a writer and photographer to see what all the fuss was about. And this is what we learned.

1/ You get a lot of bang for your buck

Eighteen bands across two days means a lot of loud (loud!) live music. And it’s a varied line up: everything from vampiric painted-face goth rock to hard blues via raunchy female-fronted grunge. Something for everyone then. And if you don’t like one band, another will be along in a minute; there’s no fucking around, each set lasted a tight 30 minutes-1hour, with a 20-minute changeover.

Richie Hudson, who’s the founder of Croydon Rocks, set the festival up in 2017 and it’s his vision that drives the event. When he took to the stage on the Saturday, with his band The Fiascos, there was a real sense of mission accomplished for both him and the event; he cared enough to start and run a rock festival in a town where live rock music can be hard to find. Hats off to Richie for his drive and dedication.

3/ You don’t have to spend a fortune

A two-day pass to Croydon Rocks cost £35. That’s £1.94 per band (if you watched all 18 bands over the weekend). Less than your bus fare home. Which leads us on nicely to the fact that if you’re at a local mini-festival, you don’t have to spend loads on travel or overnight stays either. Bargain.

Plus booze on site was priced fairly – around £3 for a can of Strongbow – and merch was too, so no one comes away feeling ripped off.

4/ It’s all about acting locally

Loads of the bands on at Croydon Rocks were either from Croydon itself, or south London. The Weird Things, WitchDoktors, Tenyson – all were local groups and by coming out to see them, you’re supporting Croydon’s live music scene, which is diverse but sometimes overlooked.

Not only that – because you can come and go as you please, punters were popping out to local boozers like The Ship or The Green Dragon, having a pint, heading back in to see the next band. Nearby restaurants and cafes also got a boost from the festival being held in a town centre venue, and that can only be a good thing.

The good thing about a diverse line-up in an intimate venue is that you get to see a lot of new stuff. And if you might not normally listen to grunge-tinted girl rock or heavy blues, then you can afford to give it a go at a smaller festival. Who knows – you might even find your newest addition to your playlist.

And just because many of the bands are local or ones you haven’t heard of, that doesn’t mean the quality drops. Chasing Dragons shook the walls with their powerful vocals and dirty chords. The Weird Things blasted out their raunchy rock to an appreciative crowd. Blind River’s heavy grooves lifted proceedings, and Tenyson’s tight musicianship was a proper treat from a band only drafted in to play the night before. Don’t be surprised if you come away wanting more.

6/ You can get up close and personal

It’s not often that you get to stand a couple of feet away from Jizzy Pearl and watch him blast out his trademark Sunset Strip-infused sleazy rock, or be shoulder to shoulder with Terrorvision’s Tony Wright. Smaller festivals mean the barriers between musicians and fans are broken down; at Croydon Rocks, bands hung around after their sets and were happy to chat to the punters. No roped-off VIP spaces here.

7/ You’ll get all the feels

The crowd at Croydon Rocks was small (around 250 people) but perfectly formed. Everyone there was out for a good time and there was a proper sense of community; people brought their kids to the  earlier acts and even when it got busy, everyone was smiling at each other and having a laugh. The audience were chatting to each other in between acts, comparing notes, swapping stories. The queues for the loos and the bar were minimal. It was a proper weekend out in a town where live music needs support and where a gathering like this makes all the difference to many local bands and businesses.