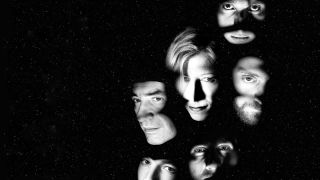 Italian purveyors of world music – or, as they describe themselves, “electro acoustic” – Nuclearte have just released the first part of a spiritual and enigmatic trilogy, Endo. The Palermo-based proggers formed back in 1996, have played at several WOMAD festivals over the years, and take their music-making very seriously.

Founding member Maurizo Cucuzza explains: “The essence of our music is an ancestral language preserved as an ancient memory within humankind, but still present in other realms of the cosmos. Our album Endo is the bridge between the world of terrestrial humans and alien worlds.”

Or, to put it in more simple terms, it’s a charming musical journey through Mediterranean lyricism and low-tech percussions from beyond.

Co-founder, singer and lyricist Ramya Rossana Filippone’s unique style is impressively versatile: she flows between high and low notes effortlessly, and she also sings in a wide variety of languages including Sicilian, Arabic, Djula from the Ivory Coast and Lingala from the Democratic Republic of Congo.

“She takes herself to an unprecedented experimental level, in freeing the lyrics from the known idioms of planet Earth,” explains Cucuzza. “The result is an interstellar language made of sounds and purely emotional vibes.”

The band believe that having vocals and sounds in multiple languages makes them stand out: it’s also a crucial factor in understanding the methodology behind their linguistic and existential theories.

Cucuzza explains: “Language becomes research of ancestral memories which belong to our world.”

Nuclearte initially drew attention to themselves when they played at the first WOMAD Festival in Reading in 1999. They soon became regulars of the festival, and later peformed at Las Palmas in the Canary Islands, Palermo in Italy, Cáceres in Spain and Benoni in South Africa.

In the year 2000, they recorded their first EP, Talè Talè at Real World Studios, which was produced by Thomas Brooman and Fabio Lannino. This event was followed by a live acoustic performance for BBC Radio.

At the beginning of 2012, they wrote a soundtrack for a theatrical piece called Sbarchi meaning ‘landings’.

“We represented the journeys of Aeneas, who escaped from Troy, from Virgil’s Aenied, as the first refugee,” explains Cucuzza on this piece of work. “Then we decided to come back to the Nuclearte experience and we worked strongly on this musical flow, creating the 10 new tracks for the album Endo.”

When asked about their musical influences, the band dig into their national roots, and merge an array of free-spirited musical genres, including prog.

“Someone said that our music blends some archetypal atmospheres of progressive, with the pulse of world and reggae music, thus driving the listener into a multi-dimentional electronic state of mind,” says Cucuzza. “Each of us has their own musical influences: we go from early King Crimson and Gentle Giant to Moderat or Torococorot, Boards Of Canada, Sigur Rós, raï, dub, gnawa, riot, ambient and so on… We don’t belong to a particular musical genre and, in the end, we have no particular way to mix all of our cultural experiences, so it is quite natural for us to contaminate everything,” says Cucuzza.

Nuclearte paint a vibrantly modern and innovative musical landscape, sourced from archaic tales and mythology that uncover a resounding profoundness throughout. They are surely a precious diamond among the many rocks out there.

A global, multidimensional electronic state of mind lost in time, space and meaning

Endo is out now on Black Widow Records