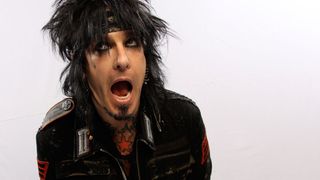 As Sixx AM bassist and founding Motley Crue member, Nikki Sixx is one of the most recognisable rock’n’roll stars of the last 30 years. Born Frank Ferrana in California in 1958 (a date tattooed on the knuckles of his right hand), he spent much of the 80s balancing superstardom with a heroin habit that literally killed him for two minutes in 1987. Since cleaning up, he has branched out into literature, fashion, DJing and photography.

What does a successful rock star have in common with the type of people you tend to photograph?

Mötley Crüe’s producer, Bob Rock, said to me when we were writing the Dr Feelgood album: “What are you gonna write about now you’re sober?”. And I said: “Just because you live in a 10,000-square-foot house doesn’t mean you won’t lay your head down in Hell”. I still have to go back to the beginning and deal with a lot of information that was downloaded to me. For me it’s about being analytical, therapeutic and a little bit narcissistic. It’s always about our version of something.

Do you ever listen to your old records?

Only if we’re going to play an old song on tour. I’d need to listen to it. I can’t remember every song off the top of my head.

Is there one song you wished you’d never recorded?

There’s a couple of songs on Girls, Girls, Girls, when we were so fucked up. There’s a song called Sumthin’ For Nuthin’. I heard it a few years after I got clean and I was like: “Woah, what the fuck is this?”

Do you remember much about the 80s?

Not much. They were challenging. I don’t understand why I could only do one or two things, when I can do so many now.

Do you think your lifestyle might have had something to do with that?

Lifestyle had a lot to do with it. There was a lot of negative energy. Rebellion is fatiguing to the rebel. It’s like the boxer who goes in just swinging, he wears himself out. These days I like to go 12 rounds.

Were drugs all bad, or did you have good times on them?

I had some very good times on drugs. Definitely. But it all went too quickly.

It hurts. There’s stuff that you don’t really know if you saw it or didn’t see it. For me, there was a very transparent vision of seeing the whole moment – the ambulance, the gurney, a limo. It wasn’t possible, because I was under a sheet.

You go: “Did I see that, or did somebody tell me that?”

Did it change your outlook on death?

I’m not scared of death at all. In my own broken philosophy, if you live your life right, death is something to look forward to. It gives you a reason to be alive.

Have you ever been to a therapist?

I go to therapy all the time. I believe it’s one of the greatest things you can do for yourself. If you can find somebody that can get you to look at things differently, then you can take that and do different things with your life.

What do you look for in a woman?

Honesty. When I can’t trust you, it becomes bad. I definitely have abandonment issues from my own mother.

How much money would it take for you to appear on your own reality TV show?

There’s not enough money for that.

What do you think about Tommy Lee and Vince Neil’s reality TV shows?

I have not watched them. I don’t agree with it.

If you were on a three-man lifeboat with the other members of Mötley Crüe, who would you throw off?

[Long pause followed by laughter] Do I have to answer this question? I’d throw myself to the sharks for the betterment of Mötley Crüe.

What advice would you give the 21-yearold version of yourself?

Try not to snort Colombia.

Would you change anything you’ve done in your life?

Some of my asshole behaviour when I was younger. I was never very good at being an asshole. I always felt bad about it afterwards.

What will it say on your tombstone?