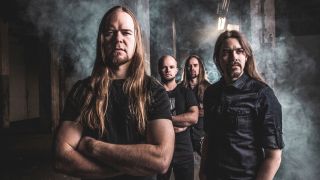 2014 proved to be a landmark year for Finland’s Insomnium, whose mesmerising melodeath tour-de-force, Shadows Of The Dying Sun, enjoyed prime real estate in many of the planet’s Albums Of The Year lists. Behind a siege of taut, punishing riffage, darkly emotive lyrics and the kind of chest-beating melodies that should only be played from the peaks of very tall mountains, the album would eventually reach #2 in their home country. In January, Insomnium kick off a year-long tour, beginning in New York, and eventually taking them across Europe and though festival season.

We caught up with vocalist/bassist Niilo Sevänen for a look back at their massive year and to find out what’s next for the band.

Was there any point during the recording of Shadows Of The Dying Sun that the band realised that they had tapped into something special?

“We had a very good feeling when we were entering the studio because we knew that we had written strong songs. But the studio experience itself was somewhat stressful because our schedule was too tight and we were running out of time. I remember it as a stressful time, especially the mixing. At one point we were thinking, ‘We’re not going to make it in time. This album’s going to be delayed another half a year…’ But luckily we made it in time. When it was finished, everyone was very happy and I sort of knew that we’d get good reviews and positive feedback, but of course it’s been far better than we had thought. It was number two on the Finnish album charts and number 18 in Germany, which is very good for a Finnish band. Then our shows during the European tour were quite good as well. We had a high percentage of sellouts and I think things have really progressed this past year more than we could have predicted, so we’re really happy at the moment.”

The new album showcased considerably broader diversity than 2011’s One For Sorrow. How intentional was that?

“It wasn’t intentional. Everything evolved normally and not at all forced. We try to evolve all the time and we try to bring something new to the table so that we don’t endlessly repeat ourselves, but of course the most obvious change was our new guitarist, Markus Vanhala. He wrote some of the songs and though he’s really well-adapted to creating the mood of Insomnium songs, he also brings a new element to our sound. He’s also affected the arrangements and he’s an amazing guitarist, so there are more solos on the record than we’ve had before.”

The lyrics on the new album enjoyed a boatload of critical kudos. What’s your approach to writing them?

“Lyrics are very important. Personally I want them to work like poems — even without the music, so if someone is just reading the booklet, they’ll have the experience of reading poetry. Before I begin writing lyrics for an album, I always begin reading a lot of books and English poetry so I can get into the right frame of mind, the right mood and so I’m open to inspiration. This time I borrowed this very thick book of poetry from the library. It’s this collection of world poetry that’s about a thousand pages and it starts from the very beginning, with the Gilgamesh epic from ancient Babylonia, to Egyptian stuff, all the way to modern day. Basically all the best stuff that’s ever been translated into Finnish.On my Christmas holiday last year, I was reading that book and taking notes while writing the lyrics for the new record.”

Insomnium are properly kicking off 2015 with a massive US tour with Dark Tranquility. This will be your third campaign across the US — are you ready?

“We’ve known the Dark Tranquility guys for some time because we’ve toured with them before and they’re one of the bands that we were listening to when we started our band. Back in the late ‘90s, they influenced our sound quite a lot. So they’re an obvious touring partner for us and I think it’s a very strong package. If someone comes to see just Dark Tranquility and doesn’t know about us, there’s a very good chance that they’ll end up liking us, and vice versa — if somebody comes to see us and doesn’t know Dark Tranquility, they’ll probably enjoy them as well. We also know all the crew guys, so it feels like going on a holiday trip with your very good friends, so we’re very excited about this tour.”

Finland often tops online polls as the most metal country on Earth. From your vantage point, is metal thriving or dying?

“Trends come and go but in the long term, metal will survive and flourish. There’s a certain kind of honesty and integrity within the whole metal community, like the way the fans really come out to support the bands that they love. In mainstream music at the moment, this is not happening at all. I’m convinced that metal will stick around and the community will remain strong. Bands might come and go but as a whole, metal has something so unique and so precious that it absolutely will survive.”

Have you ever thought about tweaking your sound to sell more records or move higher up the charts?

“The reason why we’ve made it this far is because we do exactly what we want. We make the kind of music that we love and we’re not trying to please anyone else. We’re not trying to please our label, our fans, the media or anyone. The music really comes from the heart and we don’t have any grand plan other than making the best music possible and songs that really thrill us. We don’t want to imitate anyone. That’s our method.”

“We’ve got a lot of touring ahead in 2015. We have another European tour in March and then we’ll probably get to Asia and we’ll try to hit Australia in maybe May. Hopefully we’ll have a lot of festivals in the summer, so probably another year’s worth of touring. When you’re touring, there’s not a lot of time to write new material, so I don’t know when the next album is coming out, but we might do something special before the actual full album comes out. We’ve been thinking about that lately — doing something that we haven’t done before. I can’t really reveal anything at this point, but that might come out maybe a year from now. We’ll see.”