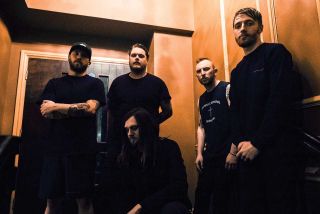 Producer: Carl Brown and While She Sleeps

Expect: More expansion of the melodic hooks heard on the previous record, but with dirtier, punkier riffs and something a little special

It feels like a lifetime that we’ve been talking about While She Sleeps as the future of British metal. And yet, it seems that despite their bulletproof recorded output, the Sheffield quintet have never quite hit the heady heights they were capable of. Then last year’s excellent You Are We album catapulted them firmly back to the higher echelons of our scene, kickstarting a cycle that was topped with a ferocious show supporting the mighty Architects at Alexandra Palace back in February. Now, they need to build on their returning momentum. We caught up with guitarist Sean Long about new music, continuing down the DIY path and being influenced by punk rock, the 90s and, erm, Daft Punk.

How does it feel to be in the studio again? Many of your contemporaries never got as far as making their fourth album.

“Yeah, it’s pretty weird when you put it like that. When we first started this band, there were other bands that we looked up to and they’ve gone now, bands that you just thought were going to go on and do amazing things. So, believe me, we really don’t take it for granted that we’re still here. Just the fact that we are talking about making a fourth full-length album and people care is enough for me. In fact, we’ve taken that attitude into the studio with us; we’re getting older and we don’t want to leave anything in, we want to get it all out of us.”

Your last album, You Are We, was made, essentially, as a completely DIY project, to the point where you even built your own studio. What has that experience taught you going into this record?

“I think it was just to trust ourselves. We had a lot of problems before the last album, which I don’t really want to go into here, but we just felt that we needed to trust our vision and to take that risk to see if we could do exactly what we wanted on our own terms and make our fans come with us. It’s given us a lot of confidence to take into this record, because the You Are We cycle went so perfectly – it literally was as perfect as we could have dreamt.”

Each While She Sleeps album seems to have its own flavour, so what can we expect this time?

“It’s hard for me to say. I don’t really like talking about what we sound like, but I feel excited that people don’t really know what they are going to get from us. I think people know the name While She Sleeps, but they don’t have a real idea of what sort of band we are. That makes me really proud, and we are aiming to surprise people again.”

“Yeah, there are a few things in there that you would never see coming. We’ve been quite inspired by a lot of stuff from our youth, that creeping sense of nostalgia that you seem to acquire as you get older, so there is a 90s feel – Green Day and Blink 182 and all those punk bands. Also, my mum used to listen to a lot of Clubland stuff, and there’s a bit of that in there too…”

“Seriously! I mean I think you’d struggle to hear it unless you were really looking for it, but I’m really bored by typical metal guitars at this point, so I always try to look for new types of music to pull from and use for how I write riffs. Daft Punk have been a really big influence as well, and Moby.”

Is this still a metal album we’re talking about?

“Absolutely, it’s heavy as balls! We wanted to have the album cover be a ballsack with three balls in there. An extra helping of balls! We’re While She Sleeps and we’re always going to be heavy, but we don’t want to repeat ourselves. We actually made a rule that we would only put stuff in if it scared us. And some of these songs have got us all pretty nervous, but that’s exciting! That’s how music progresses! Too many of our bands are happy to tread water, and we’re not going to do that – we’re going to whip our balls out and put them on the table.”

And, after the success of the last album, can While She Sleeps still get to the top of the UK metal pile?

“I don’t want to sound arrogant, but I think so. We want to. I’m not interested in being a cult band, I look at bands like Green Day and see how they’ve developed from a punk band into what they are now, and I think that’s fascinating. Who wouldn’t be seduced by the idea of growing like that? It’s definitely the goal for us; we want to be one of the definitive bands of this generation.”

The new While She Sleeps album is expected early next year.