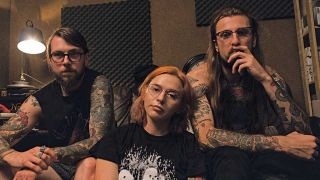 The success of a young, part-Russian/part-Welsh, part-death metal/part-hardcore band  at the tail end of 2016 was one of the most surprising, yet welcome, events to happen to our scene for some time. After unexpectedly flooring everyone with Animus, and the increasingly excellent live shows that accompanied them, Venom Prison now have the unenviable task of having to follow up one of the strongest debut records in memory. We spoke to vocalist Larissa Stupar about just how they plan to top it.

What was the mindset in Venom Prison going into the recording of the new album after the success you’ve had?

“We felt a bit of pressure, actually. After the success of Animus we felt people have real expectation that we have to not just meet, but succeed. We wrote and then scrapped a lot of songs, and this one was definitely harder to write because we spent so long on tour. We didn’t have a lot of time to sit down and write; we had to give up a lot of time with family and friends to just go and write the songs and really obsess over getting them right.”

“Ash [Gray, guitar] and Ben [Thomas, guitar] do most of the writing and they realised what they liked and what they would have improved from last time. So we went from there and just tried to write. This album is definitely heavier than Animus and it’s more experimental and technical, too. There are some electronic bits and some melodic parts that people wouldn’t necessarily expect."

What effect has playing those bigger stages like London’s Brixton Academy had on you?

“I think we realised that people really like breakdowns, so we’ve tried to put a lot more of them in there! We’ve got heavier beatdowns and some faster grindcore elements. Just anything to make people start a circle-pit.”

What kind of lyrical themes are you exploring?

“This one is going to be a lot more personal for me, because I’ve been suffering from depression for the last few years now and I’ve been going through some really hard times. I just wanted to write down and communicate those feelings. I read somewhere that if you express those thoughts it feels better as you stop carrying it. But I’ve also written songs about homophobia and transphobia. Basically, the whole record is about suffering, whether it is societal suffering or internal suffering. I wanted to express those feelings.”

There has been so much for you to draw on since the last album came out. What else have you focused on?

“One thing that rarely left my mind was the #MeToo movement, in music and especially in Hollywood. I don’t know if you remember the case of the girl who was assaulted behind a dumpster in 2016 by [U.S. athlete] Brock Turner, there’s a line that was said to the judge in his defence that was something like, ‘They’re ruining his life just because he had 20 minutes of action.’ It was so ridiculous. There’s a line in one of the songs that actually references unfair court hearings for rape survivors. We thought it was important for us to set out our stall in Animus and then push it a little bit further. I tried to incorporate more femininity into my lyrics, talk about the role of motherhood. It’s much more personal but it’s very politically minded as well. It’s pretty dark.”

Is there any fear in you about having to go out and perform those very personal songs night after night?

“I have mixed feelings about it. I’m very afraid that people will read my lyrics and just go, ‘What the fuck is she going through?’ and then think that I’m insane or that I’m going to hurt myself. But then on the other hand I think it’s very important to release those feelings and let people know that they’re not on their own. I think that a lot of people are going to be able to relate to what I say on this record, and that should make them realise that they’re not on their own.”

Last time we spoke you said you foresaw a day when a grindcore festival could pull 80,000 fans. Is this album going to bring extreme metal even closer to the mainstream?

“I think we are seeing metal become more and more accepted in normal society. Whether it’s genuine or whether it’s just to follow a trend I really don’t know. But we just toured with Trivium and they are not as extreme as us, and it was often hard for their fans to really understand what we were doing, but I think most of them did dig us!”

The new Venom Prison album will land next year.