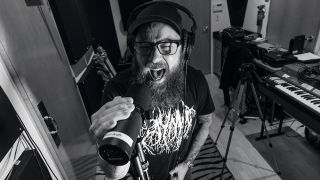 Expect: An up-tempo barrage of riffs, hooks and anthems from some of Gothenburg’s finest

In Flames’ tonal shift towards alternative metal has been taking place for some time now, with 2016’s Battles demonstrating their most dynamic leap yet towards a cleaner, more streamlined sound. After gracing the biggest of stages with Five Finger Death Punch and Avenged Sevenfold on their last cycle, mild-mannered frontman Anders Fridén tells Hammer that we can expect a much more up-tempo experience from album number 13.

“Great! I don’t really have a grip of it just yet because we’re working on all the tracks. Like with our last record, we came here with nothing and created something so it is difficult to sum it up, but so far, it sounds very In Flames, there’s no surprises there. I think it sounds great and it has all the essentials that we want for an In Flames album; there’s melodies, screaming on various tracks, hooks everywhere. I think if you are into In Flames and what we’ve done for the past 20 years or so, you should be happy. I’m very, very happy!”

Battles was arguably your most melodic record to date, so can we assume this new one follows suit?

“Well, we’ve always been a melodic band but it comes out in different forms: the guitars, vocals, keyboards or whatever. This is very melodic, too, but I would say this is more up-tempo than Battles. I think it has more similarities to Sounds Of A Playground Fading but don’t quote me on that… I guess you will, ha ha!”

Lyrically, what’s inspired you this time out?

“We’re living in a tough world. I’m looking at my kids and they are growing up in the world we have today, all the troubles you face and the political climate is very tense, it’s almost going to explode. All of that brings tension, so that is what I’ve been looking into, but it is the same with the music. Then it is dealing with past relationships and things that I have gone through – it’s not all based on me or anything, I just take ideas or inspiration from certain times of my life.”

You’re currently without a permanent bassist as Peter Iwers left after the release of Battles. How has that impacted the recording for this new album?

“Peter was a great bass player and he obviously brought a sound, but he didn’t write any music so it hasn’t really made much difference. Live, he had a big impact with his playing style and he brought a sound that adds something to the music but when it comes to what we’re looking to do, it doesn’t really change anything.”

You’ve played some big stages on the last tour with the likes of Avenged Sevenfold, Five Finger Death Punch and the main stage of Download Festival. Are you feeling more inclined to write more arena-friendly tracks for this new record?

“That’s not even on our minds, I don’t think about that at all. We are trying to write as good In Flames songs as we possibly can, we’re not trying to put that in a certain place. If we’re feeling good after this next one, then yeah, let’s go with it, but no, I don’t even think about that. That wouldn’t be good for us if we were writing with that in mind, we just want to write as good In Flames songs as possible! We have good songs and we can play them all in an arena, but they are not written for that.”