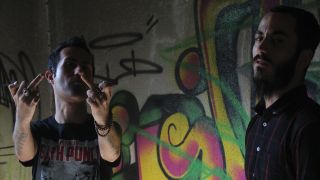 "I was asleep when they broke in,” remembers Nikan ‘Siyanor’ Khosravi, singer/guitarist of Iranian metal band Confess, of the night government agents came for him.

“They searched the house, confiscated my belongings. I was taken to a high-security prison, interrogated and locked in solitary confinement.”

Unbeknownst to Siyanor, the same thing was happening to his bandmate, DJ/sampler Arash ‘Chemical’ Ilkhani. Initially threatened with death sentences, the band were eventually released on bail for 1,000,000,000 Iranian Rial, which is approximately £25,000.

Their alleged crimes? Things that we take for granted: owning ‘banned’ movies and books, and making blasphemous music that dares question an oppressive Islamic regime.

Freedom of expression is an unattainable liberty for Iran’s younger generation, who, via the internet, have had their eyes opened to a western way of life.

“Iran is not an orthodox Islamic country,” Jasmin Ramsey, an Iranian-American journalist and representative of the New York-based Centre for Human Rights in Iran (CHRI), is earnest to point out.

“All you have to do is go and see how westernised and liberal some parts are. The government is an Islamic Republic, but the people cannot be characterised that way.”

Iranian youth’s use of art as a form of liberation is a political act; being in a metal band is dangerous. “Any kind of art has to get a permit from the Iranian Ministry of culture and Islamic Guidance,” explains Jasmin.

“In any respect metal would be illegal, condemned as anti-Islamic, Satanic, whatever, but despite strict censorship all types of music keep popping up. Metal bands have to perform in hiding; it’s interesting to me that this kind of music can even survive in such conditions.”

That metal persists in the face of such opposition is testament to the iron will of bands like Confess, but it’s a fight that’s taken a heavy toll.

Speaking from Turkey, Siyanor would not reveal his whereabouts for fear of retribution, having escaped across the Iranian border illegally before he was due to face trial.

“I cannot thank my mother enough; she gave birth to me twice – the day I was born and the day she helped me escape,” he says, lamenting the separation from his family.

“I don’t have anything here except a love for the music I want to do – if I couldn’t do it, I’d rather be dead.”

“If you’re caught jamming by the authorities it can cause you trouble. If you begin to get popular, it gets serious. Islam is the whole issue – it’s a symbol of oppression.

"If your music talks about reality as you see it, the socio-political issues of the country, they will come to shut you up.

"Musicians, film directors, writers, journalists; believe me, there are lots of them in prison right now.”

Confess first ran into trouble in 2014 over the song Thorn Within The Merciful Hands of Your Loving God from their 2015 album In Pursuit Of Dreams – a blasphemy made even worse when the band began to attract attention.

“We were invited to a few festivals and had interview requests from other countries,” remembers Siyanor. “We caught the government’s attention.”

Such are the events that led to Siyanor being jumped in his own home in the middle of the night. What followed was gruelling. “We were in prison for a year and a half,”
he remembers.

“When we eventually made bail, they continued watching us – they were tracking our phones, photographing us, monitoring our social media. We put the band on hold; we were having a nervous breakdown. I was kicked out of university; I lost everything.”

Many artists unable to cope with the pressure escaped before a similar fate befell them. Trivax are a black metal band based in England, and their Iranian singer, Shayan, is full of bitterness about the state of his homeland.

“We only did a few shows in Iran, which is still more than most bands,” he remembers. “Our first show in 2011 was at the Kamalolmolk art school. It was truly chaotic; the kids went crazy – they set the backstage room on fire! We had to evacuate.

"Other than that, we managed to play Niavaran Park in [Iranian capital city] Tehran twice. The first time our sound was cut within seconds.

"The second time we managed to play two tracks in front of about 600 people, which was surreal – and lucky!

"Since 2012 we’ve mainly played across the UK and hope to tour Europe. We played Bloodstock festival in 2018, which was a great experience.”

For Shayan and many like him, disconnection from Iran may well be permanent. “During my last visit in 2015, I made several attempts to make Watain graffiti in Tehran,” he reveals.

“Not long after leaving, Trivax released a single entitled Death To The Empire Of The World, which it contained blasphemous lyrics in the Farsi language.

"Both the song and the Watain incident created a fair bit of noise online, which pleased me, but led to the authorities finding out, which put me and my family at risk; so no, unfortunately I cannot go back, but I’m damn proud of giving them the middle finger on the way out!”

Despite physical disconnection from his country, Shayan cares about its future. “I hope for the removal of forceful Islamic law and the separation of religion from politics,” he says.

“I want people to come out from under this unnecessary oppression. An average citizen’s worry should be about paying their bills, not fearing prosecution because they said or did something un-Islamic.”

During the research process for this feature, Hammer reached out to a female vocalist exiled from Iran for performing in a metal band.

She wished to remain anonymous, declining to comment on the situation for fear of retribution on her family still in Iran. For prog-metallers Heterochrome, who are still living in Iran and have a female singer, such dangers remain all too real.

“For our only album, Melancholia, the final recording was done in Chaotic Waves studio by our friend, and member of metal band Internal Chaos, Alireza Shafiee. Studios in Iran tend to reject recording the voice of a female vocalist,” explains guitarist Mohammadreza Rezaei.

“There are some good thrash, doom, death and progressive metal bands active right now. Every now and then there are live shows in Tehran, and the community continues to grow.

"Metal is illegal, but like anywhere in the world, when you ban something there will be underground activity. People always find a way around the rules, but you always have to be afraid.”

For Internal Chaos, a symphonic, prog-metal fusion, escaping Iran is a dream that comes with complications; not only does it mean leaving everyone and everything behind, it means adapting to a new way of doing things.

“Our motivation for going abroad is a better future not just in music but in life itself,” explains lead vocalist/composer Alireza Shafiee.

“We would surely miss our country because of all the memories we have here. Sometimes you have move on to chase your dreams, but you never know what living in a totally new culture will be like.”

The prevailing western perception of Iran as a fundamentalist state is frustrating for Iranians. “It’s pitiful what the western world thinks about life in Iran in the age of modern communication,” laments Alireza.

“Many believe that we all live in tents in the desert with our camels! People are amazed when they hear about a metal band from Iran. The first thing all of them say is, ‘We never thought that there were any bands in Iran!’”

It’s easy to see why, given the western media’s focus on Iran’s regime, providing little insight into the life of the average Iranian.

Yet despite unthinkable obstacles, aspiring artists continue to find outlets for their frustration, with organisations like CHRI working hard to draw international attention to the continuing human rights abuses perpetrated by the state and the fight of those Iranian citizens who yearn for liberation.

“The very fact that metal exists is testament to that,” says Jasmin Ramsey. “No matter how suffocating the government can be. Not everyone wants to censor art; some have progressive views and want the people to be free – Iran is a dynamic society.”

Recently, much has changed for Siyanor, having found a new lease of life in that most metal of countries, Norway.

“I was invited by their government to live here with permanent residency, as what they call ‘Fribymusiker’ (The Guest Musician)” he enthuses, the relief obvious.

“Right now, I’m working on completing Confess’s line-up, preparing for some shows in Norway and the EU! Confess are not dead and never will be.”

Despite Arash remaining in Iran with charges pending, Siyanor has a newfound faith that he can reunite with his bandmate.

“We will release music together again,” he affirms. “No disrespect to the major bands, but lots of the things they write about are imaginary for them; for me, they’re things I’ve lived.”