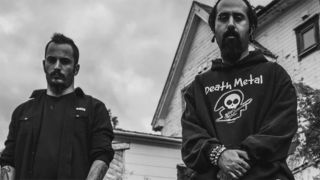 The two members of Iranian metal band Confess have been sentenced to a combined 14 and a half years in prison.

Nikan Khosravi and Arash Ilkhani were arrested in November 2015 and hit with a variety of charges, including blasphemy, writing anti-religious lyrics and promoting music that the state considered to be Satanic in nature.

The pair managed to avoid the death penalty, but were put in solitary confinement, with Metal Injection reporting they were then bailed for $30,000 each. Khosravi and Ilkhani managed to flee to Turkey and were subsequently granted asylum in Norway.

However, Loudwire report that authorities in Tehran have now handed down their sentence on the pair in their absence.

In light of the news, Confess have decided to release their new track titled Evin – a song named after the Iranian prison where they were held. It will be included on their upcoming album Revenge At All Costs.

In 2016, Classic Rock published an in-depth feature exploring the reasons why Iran and Afghanistan were imprisoning metal artists, with the article also highlighting other parts of the world where musicians were in danger.