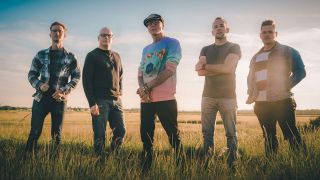 As the turn of the century approached, the British music industry was thriving. Benefitting from the tail-end of the grunge explosion which had thrown alternative music into the mainstream, major labels as well as indies were still willing to take a punt on what might become rock's Next Big Thing. UK alt-rock bands such as Hundred Reasons, InMe, Reuben and Hell Is For Heroes were all gaining momentum, growing devoted fanbases and carving out column inches in the British music press.

But for many of these bands, their successes were relatively short-lived. As the shift into the 21st century – and all the new technology that came along with it – saw the way people consume music rapidly change, the music industry went into free-fall. A number of the labels these bands were signed to suddenly faced financial ruin, and the promises of their contracts seemed to crumble before their eyes.

InMe vocalist and former guitarist, Dave McPherson, witnessed this sharp decline first hand when the band’s label, Music For Nations, went out of business during their five-year contract. Though their career had been flourishing, the members had no choice but to seek out full-time employment.

“I was a teenager when we got signed… I’d just come out of college,” says McPherson. “We were signed to the biggest independent label in the world. I felt like we were gonna be the biggest, most famous band in the world – I didn’t have to do my exams or anything.”

For many of these bands, for a brief while their dreams had become reality. The promise of global success had come good. “We were promised the world," says McPherson. "Things just got better and better from there”.

“We were travelling the world, going to Japan, not having to work a job, pay bills or rent or whatnot, so it was a good plan for quite a few years” he says. “[InMe] were doing headline tours, supported with bands like Biffy Clyro, headlined the Millennium Dome – all this crazy stuff. Shooting videos out in Canada, playing big festivals.”

Yet, for InMe and others, they were unaware things were about to come to an abrupt end. When the emergence of the internet hit the music scene, musicians, as well as their record labels, were the first ones hit, without any time to prepare for the shift.

“It was actually during the recording [of third album Daydream Anonymous] that everything was up in the air” McPherson says. “In 2006, in January, I got a phone call from my manager at the time just saying that money is running out and I was like: 'OK so how many more wages we got a month?' And he went: 'None'. That’s when it was like 'Oh bugger… time to go and get a bar job then'.

For the artists involved, it felt as if the promise of a career doing what they loved had fallen through just as quickly as it was granted. Many of the musicians involved, barely in their twenties, were forced to put the Hollywood lifestyle on hold and return to their hometowns, looking for new ways to keep the bills paid.

“I never worked full time before, I just went to college and then I got signed up so it was a whole new thing,” McPherson says. “You have to figure out ways to pay the bills. I play weddings and now I work for the NHS as well. We’ve all got jobs. Our drummer, Tom is a long-haul airline pilot, our guitarist, John, is a personal trainer, my brother runs a casino room and Gazz works quite high up in the NHS in IT”.

Looking back, although no one could have predicted the complete overhaul of music industry as they knew it, the musicians involved still ask themselves what they could have done differently. McPherson tells us that he wishes he could have spent the time more wisely, focusing on his next step rather than living in the moment:

“I think we should’ve tried harder, but we were young and dumb and having a hell of a time," he says. "Having a good time of just being stupid kids. If I had known how fragile it could’ve been and that it could get a lot harder, then I definitely would've taken it a lot more seriously.”

“I miss tour buses and really really wonderful, massive dressing rooms with lovely hot showers and with massive riders and lots of food, catering and much nicer hotels. Yeah, not gonna lie, I would much rather [be doing] that… who wouldn’t?”

Despite no longer being able to make a living from the band, InMe and other bands who experienced this turmoil first hand are adamant to stay positive. Although there are still barriers to them reviving the career they enjoyed first time around, the musicians insist that it's their passion for the music that keeps them going.

“If anything, I think it gave us a hunger and a passion for the band more. It wasn't a commodity as such, it was just something that we do and something we love and enjoy. I think we’ve only improved with our struggles.”

Still touring and releasing new music, InMe are determined to prove that the ups and downs will pay off in the end. Recording new albums that consistently remain loyal to their sound, McPherson says that InMe are grateful for their experience – insisting it pushed them to mature and make music they’re proud of.

“We’re certainly not doing the band for money or any ambitions to make money down the line," he says. "It’s just we love playing live, we believe in our band, believe in the music and we have fun together for the most part. It is hard, and it's always slightly falling apart at the seams, but we’re pretty experienced and good together.”

“InMe is the strongest its ever been; this is the best version of InMe,” he says. “I’m very proud that we keep it going and its been 24 years. Nearly a quarter of a century. I don't know if we’ll make it to 50, but not every band can do a 25th year anniversary.”

As to what else is in the pipeline for the band, Dave hints at a new album currently in the works, alongside a potential tour coming our way – although, as with all live events at the moment, it looks like that'll be on hold for the foreseeable future.

With terms like ‘personal demons’ and ‘highly emotional’ being thrown about, it’s safe to say that the band has let their experience in the industry influence their music and bring a more personal aspect to their sound. InMe are a band who refuse to let their tumultuous past get in the way of their future.