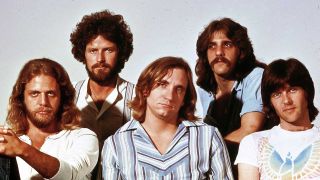 ‘Song power’ was their catchphrase – they had it printed on T-shirts. And it was no idle boast. With iconic songs such as Hotel California, Take It Easy and Life In The Fast Lane, The Eagles rose in the early 70s to become one of the biggest rock acts of all time.

In a career that has so far lasted almost 50 years, the band have sold in excess of a whopping 120 million albums worldwide. Until 2009, when the death of Michael Jackson boosted sales of his Thriller, The Eagles had the biggest-selling album in American history with their Greatest Hits (1971-1975), which alone has shifted more than 42 million copies.

Formed in Los Angeles in 1971, The Eagles would define the California rock sound of the 70s with a blend of rock and country music and a melodic sensibility attuned to pop radio. But none of the group’s founding members were native Californians – guitarist Glenn Frey was from Detroit, drummer Don Henley from Texas, guitarist Bernie Leadon from Minneapolis, and bassist Randy Meisner from Nebraska.

While the band members all shared vocals, it was Frey and Henley who were The Eagles’ creative powerhouse from the start. They were the principal songwriters and lead vocalists – on stage, Henley sang lead on many of their biggest hits from behind his drum kit – and it was the two of them who led The Eagles to huge success as other band members came and went.

It was in the second half of the 70s that the band reached their artistic and commercial peak, scoring five US No.1 singles and attaining global superstardom with 1976’s now classic Hotel California. But by 1980 a combination of drugs, money, ennui and ego led The Eagles to split, with Henley calling it “a horrible relief”.

Solo careers followed, Henley’s the most successful. And then, in 1994, the previously unthinkable happened: The Eagles reunited. The 1980 line-up – Frey, Henley, guitarists Joe Walsh and Don Felder and bassist Timothy B. Schmit – recorded the jokingly titled album Hell Freezes Over.

Although Felder was fired in 2001 and Frey passed away in 2016, The Eagles have continued, and while they may not have recorded since the double Long Road Out Of Eden album in 2007, they remain a live act capable of filling stadiums. Close to half a century after taking flight in Los Angeles, The Eagles remain the ultimate testimony to ‘song power’.

The Eagles’ first No.1 album in the US, and their first as a quintet with new guitarist Don Felder.

A consistently great record, One Of These Nights featured three US top five hits: country heartbreaker Lyin’ Eyes, Randy Meisner-sung ballad Take It To The Limit, and the funky title track which made No.1. Also included was Journey Of The Sorcerer, a highly unorthodox hillbilly/orchestral-rock epic later adopted as the theme for TV series The Hitchhiker’s Guide To The Galaxy.

When that song’s author, Bernie Leadon, quit the band in late ’75, he was the first original member to go. His replacement was guitar hero Joe Walsh.View Deal

Described by Don Henley as “a concept album”, Hotel California was, on the deepest level, a critique of modern America. More simply, it is an album full of great songs (Wasted Time, Life In The Fast Lane, The Last Resort), The Eagles’ masterpiece, and one of the greatest rock albums ever made.

The band’s biggest-selling original studio album, selling more than 16 million in the US, Hotel California topped the Billboard chart for eight weeks and reached No.2 in the UK. It also yielded two US No.1 singles in the bitter-sweet New Kid In Town, and a mythic title track built on a reggae groove and capped with the mother of all lead guitar codas.View Deal

The Eagles’ debut had a sound as all-American as the band’s name: country-rock, with sweet vocal harmonies inspired by The Byrds and Crosby, Stills & Nash.

It was recorded in London at the insistence of British producer Glyn Johns, but the music is pure Americana. First single Take It Easy, co-written by Frey and singer-songwriter buddy Jackson Browne, would become one of the band’s signature songs.

Two more hits – the rockier Witchy Woman and the blissed-out Peaceful Easy Feeling – powered the album into the US Top 30. Rolling Stone magazine proclaimed it a contender for “best first album” of 1972.View Deal

After the success of their first album, The Eagles were brought down to earth when this follow-up, a concept album based on the legends of the Wild West and the Doolin-Dalton outlaw gang, stalled at No.42 in the US, and its singles, Outlaw Man and Tequila Sunrise, failed to make even the Top 50.

In hindsight, the obvious choice for a single was the title track, a beautiful ballad. Over time, the latter song and this album have attained classic status.

The imagery might have been hokey – the band dressed up as gunslingers for the cover – but the music was among the most richly atmospheric that The Eagles ever recorded.View Deal

Hotel California was such a hard act to follow that the Eagles spent two years making The Long Run – a product of cocaine-fuelled perfectionism that led inexorably to the band’s implosion in 1980.

Few traces of The Eagles’ country roots remained here, except for Frey’s whoops on the rollicking US No.1 hit Heartache Tonight. The album’s smooth, clinical sound is typified by deluxe MOR ballad I Can’t Tell You Why, sung by Timothy B. Schmit (Randy Meisner’s replacement), and Henley’s creepy dance-rock track The Disco Strangler. But it’s still a great record. In the US it was the last No.1 album of the 70s.View Deal

Following The Eagles’ split, both Henley and Frey enjoyed success as solo artists, Frey with soundtrack hits The Heat Is On (from Beverly Hills Cop) and Smuggler’s Blues (from Miami Vice), Henley with the singles Dirty Laundry, The Boys Of Summer and The End Of The Innocence.

But it’s Henley who’s made the better albums, and Building The Perfect Beast, his second, is the pick of them. Backed by some big names, Henley crafted a brilliant adult pop-rock album that sold three million copies, and in The Boys Of Summer it produced one era-defining songs of the 80s.View Deal

A double studio album was something The Eagles had first considered while they were making The Long Run in 1979. They finally delivered one in 2007 in the shape of Long Road Out Of Eden, the band’s first studio album of original material in 28 years.

Taken as a whole it’s certainly no Hotel California (but then, of course, few albums are) but the country rocker How Long rolls back the years, No More Cloudy Days is vocalist Frey at his best, and the album’s title track, written by Henley, is a powerful 10-minute meditation on spirituality and American imperialism.View Deal

It was a running joke: during the 80s, whenever Don Henley was asked if The Eagles would get back together he replied: “When Hell freezes over.” So the band had the perfect title for this comeback album, which featured studio cuts of four new songs, and an 11-track live set recorded at The Eagles’ first reunion show in April 1994.

The new songs are good – especially Love Will Keep Us Alive and Learn To Be Still – but the live set is something truly special. From Tequila Sunrise through to the classic finale of Desperado, The Eagles proved just how much they’d been missed in what Henley wryly describes as their “14-year vacation”.View Deal

Walsh was already a star when he joined The Eagles. A former member of acclaimed power trio the James Gang, he’d also hit big as a solo artist in 1973 with the classic Rocky Mountain Way.

Having played a major role on his Eagles debut Hotel California – co-writing two songs, including rock anthem Life In The Fast Lane, and trading great solos with Don Felder on the album’s title track – he found time during the lengthy gestation of The Long Run to record this, his best solo album. Its highlight is Life’s Been Good, a Top 20 hit in the US and UK, and a satire of rock stardom that’s not only funny, but also kicks ass.