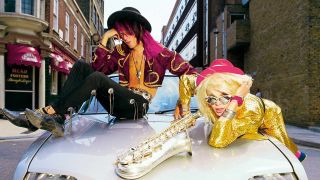 They were one of the great rock’n’roll bands of the 80s but, for all the brilliant music they made, the career of Hanoi Rocks was defined by the tragedy that derailed them at the moment they seemed destined to make it big.

Formed in the Finnish capital of Helsinki in 1979, Hanoi Rocks were led by two charismatic figures. Singer Michael Monroe (real name Matti Fagerholm) was the most glamorous rock star of his generation, looking like the bastard son of Mick Jagger and Brigitte Bardot.

Guitarist and chief songwriter Andy McCoy (born Antti Hulkko) had a darker presence, styled on Keith Richards. The band’s name was inspired by the heroin song Chinese Rocks, recorded by Johnny Thunders and The Heartbreakers, and in Hanoi’s decadent sound and image were echoes of Thunders’ other legendary group, the New York Dolls.

After relocating to London in 1981, Hanoi Rocks’ raw early records and electrifying live shows saw them hyped as the next big thing by Sounds and Kerrang! By 1984 they were riding high, signed to major label Columbia for the album Two Steps From The Move. But on December 8, 1984, disaster struck.

In Los Angeles during a US tour, several band members attended a party at the home of Mötley Crüe singer Vince Neil. When they ran out of beer, a heavily intoxicated Neil drove to a liquor store, with Hanoi drummer Razzle – Nicholas Dingley, an Englishman – as passenger. On the way back, Neil crashed into another car. Razzle was killed instantly. Both occupants of the other car were seriously injured. Neil escaped unharmed.

In the aftermath, Neil was convicted of vehicular manslaughter, for which he served two months in jail and paid out more than $2 million in damages. Mötley Crüe carried on, but Hanoi Rocks could not. Six months after Razzle’s death, the band split up. Their big chance had gone. The band eventually reformed in 2002, albeit with only Monroe and McCoy from the classic 80s line-up. The reunion lasted until 2009. Since then, Monroe has remained active as a solo artist.

What Hanoi Rocks left behind were some of the best rock’n’roll records of the 80s – songs that had a major influence on one band in particular, Guns N’ Roses. As former GN’R guitarist Slash sagely noted: “Hanoi Rocks were the real deal.”

There were bigger rock albums in 1983. Biggest of all, Def Leppard’s Pyromania and ZZ Top’s Eliminator. But the streetwise, supercharged Back To Mystery City made Hanoi Rocks the coolest band of the era.

Their fourth album and first official UK release was produced by former Mott The Hoople stars Pete ‘Overend’ Watts and Dale Griffin. There is a manic energy in Malibu Beach Nightmare, a 70s glam rock flavour in Tooting Bec Wreck, and an echo of 60s hit Mony Mony in the anthemic title track.

It was supposed to be the game changer: the band’s first album for major label CBS, produced by Bob Ezrin, who’d made classic records for Alice Cooper, Lou Reed and Pink Floyd. Instead, after Razzle’s death, Two Steps From The Move was a monument to what might have been.

It kicked off with a boisterous cover of Creedence Clearwater Revival’s Up Around The Bend, but had great original songs in Underwater World, Million Miles Away, Don’t You Ever Leave Me and Boulevard Of Broken Dreams (co-written by Ian Hunter).

The joke song Boiler, sung by Razzle, became an epitaph for a much-loved character.View Deal

Bassist Sami Yaffa would describe the band’s second album as “a piece of shit”. He was wrong. Oriental Beat was the best record they made before Back To Mystery City.

It was recorded in London in late ’81, a few months before the band would make the city their new home. And if the production was as ropey as on the first album, the songs were better. Motorvatin’ is kick-ass rock’n’roll with a touch of pop genius in the chorus.

The title track is like The Clash fronted by Billy Idol. And the album ended with a surprise – a sad and beautiful song named Fallen Star, performed with only piano and vocal.View Deal

The follow-up to Oriental Beat was not an orthodox studio album but a collection of singles and B-sides recorded between ’81 and ’82. Although Razzle was featured in the group shot on the cover of Self Destruction Blues, all of the songs had been cut with his predecessor Gyp Casino, who was fired in ’82.

Among these 12 tracks are some of the best they ever recorded. Love’s An Injection is the kind of sleazy hard rock song that Alice Cooper built a career on.

I Want You is a throwback to the Stones’ Star Star. There was even a ‘festive’ song of sorts, named Dead By Xmas.View Deal

Following Hanoi’s split in ’85, the two guitarists, Andy McCoy and Nasty Suicide, stuck together. First, they formed Cherry Bombz with singer Anita Chellamah, formerly of Toto Coelo. When this failed, McCoy and Suicide cut a half-great album as a duo.

Silver Missiles And Nightingales had been the working title for Two Steps From The Move. But the Suicide Twins’ music came from a different place: performed mostly on acoustic guitars, with both guys singing.

Standout track The Best Is Yet To Come could have passed for a great lost Stones song.View Deal

After the demise of Hanoi Rocks, Monroe moved to New York and launched his solo career in 1987 with Nights Are So Long. A low-key comeback, the album was comprised mostly of cover versions of cult rock songs.

But with the follow-up, Not Fakin’ It, he raised his game. He threw out ballsy hard rock on the title track, a raucous old Nazareth song, while Dead, Jail Or Rock ‘N’ Roll featured Nasty Suicide and Springsteen sidekick ‘Little’ Steven Van Zandt (and a video cameo from Axl Rose).

There was atmospheric class, too, on All Night With The Lights On. It wasn’t a hit, but it remains a lost Michael Monroe classic.View Deal

The title of this debut, promising dangerous and exotic rock’n’roll thrills, was a perfect mission statement from a band who combined the swagger of glam rock with the hard-and-fast intensity of punk. And from the start, they had that sound nailed.

The touchstones were Alice Cooper, the Stooges, the Dolls, and The Clash. Monroe wasn’t happy with his performance on this album but his voice, as much as McCoy’s writing, gave the band its edge.

Recorded cheap and self-produced, it had killer songs in Tragedy and Don’t Never Leave Me, proof these guys meant business.View Deal

When this comeback album was launched, McCoy said: “I see this band taking over from the Stones.” If this wasn’t a joke, he’d learnt nothing from the past.

In the event, the reunion played out as expected. Although only McCoy and Monroe were present from the definitive line-up, Twelve Shots… had flashes of the old brilliance, and one classic song, A Day Late, A Dollar Short.

Two more albums followed: Another Hostile Takeover (2005) and Street Poetry (2007). Both were okay. By 2009 it was over, the farewell shows in Helsinki filmed for a DVD titled – with typical black humour – Buried Alive.View Deal

For Monroe, as for McCoy, no other band could compare with Hanoi Rocks. McCoy was killing time in Cherry Bombz and then Shooting Gallery.

So, too, Monroe with Jerusalem Slim, co-starring Billy Idol’s guitarist Steve Stevens, and Demolition 23, in which he reunited with Sami Yaffa and Nasty Suicide.

Monroe made his best records outside of Hanoi as a solo artist, and 2011’s Sensory Overdrive began his latest three-album hot streak. Backed by a stellar band – featuring Yaffa, Ginger Wildheart and ex-Dolls guitarist Steve Conte – Monroe served up a potent cocktail of garage-rock and power pop. Heady stuff.View Deal