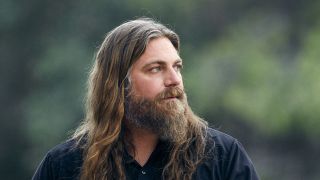 Fifteen years after he began, Jake Smith and the White Buffalo are becoming something of an overnight success, in Europe and the UK at least.

If you missed the TV series Sons Of Anarchy – not least the heart-wrenching finale, set against the stark forebodings of the White Buffalo performing the Emmy-nominated Come Join The Murder – then Smith and his band might still be on the margins for you.

As Smith puts it succinctly: “I write about all walks of life. Songs for the underdogs and the outlaws. Love songs, heartbreak songs, murder ballads, drunken laments, and everything in-between the shadows.” Imagine a blue collar Tom Waits, or Nick Cave pumping gas in a station just off the highway. Smith has the lyrical reach of both and the unerring knack for character-driven, narrative tales that have the stripped-back resonance of a Raymond Carver story – if all the protagonists carried a bottle or a gun, or both. His love songs are mostly wretched, though his rumbling, soulful baritone and rich melodies – overlaid with a dense-sounding mix of Americana, blues and the bleakest of country music – turn all the ugliness into a thing of beauty.

While the White Buffalo have been serious road dogs for at least eight years, and making more than a living from it (“We just did the Fillmore in San Francisco”), it was their inclusion in the Sons Of Anarchy soundtrack that truly lifted their profile in the US.

“The songs are sprinkled throughout, starting in season three, then a couple each season and then they really started using and abusing me,” says Smith on the phone from his home in California. “The had me sing on other people’s shit, and then we did the collaboration finale song. That was huge, but it wasn’t really overnight; it was a matter of five years that I had songs in there, but the beauty of it was people recognising the voice.”

Smith didn’t pick up a guitar until he was nineteen. “We’d sit around at my buddy’s house and his dad would play Dylan to us and then I just got a guitar on a whim, he wrote a few chords down and I started playing and writing songs from there.” Though he finally has a European label for this latest album, he’s staunchly autonomous in his approach and the music he makes.

“For the longest time I was independent completely. Even with my current label I can do whatever I want, and I never feel pressured for a hit. I didn’t tell them about the concept album (2013’s Shadows, Greys & Evil Ways) until two weeks before we recorded, and they were like, ‘cool’.

“It’s really about me connecting with people anyway. They like it because they like it, which is the whole point of why I write songs, that they should move people in a certain way – happy, sad or scared.”

Get ready to feel all three.

FOR FANS OF: Rain Dogs by Tom Waits

“Rain Dogs was the first Tom Waits album I got. He was doing something that no one else was doing. It’s always surprised me the way he’ll have accessible songs like Time, and then all this weird shit. He’d rather stay on the stranger side of things; the piano ballad followed by some pipes dropped down the stairs.”