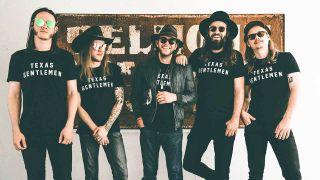 A lot can be said for standing back and taking notes. The five core musicians of southern rock collective the Texas Gentleman have been playing together for nearly 10 years, but as a backing band for singer-songwriters including Leon Bridges and Nikki Lane. During that time the Gentlemen learned on the job, discovering how to make records and uncovering the sounds that would inspire them to create their very own album.

“We discovered all this great music together: Willie Nelson, Gram Parsons, The Byrds, music ingrained in American culture that defines the human narrative,” explains bandleader Beau Bedford, who also works as a music producer in Dallas.

Having worked alongside many musicians, the Gentlemen picked up tips, particularly from Leon Bridges and Kris Kristofferson.

“Leon and Kris have such a similar spirit; they just organically have it inside of them,” Bedford explains. “They’re not trying to be anything for anybody. They have a gift, and they’re sharing it. There’s some real truth and potency that comes along with that.”

The Gentlemen recorded their debut album, TX Jelly, at FAME Studios in Muscle Shoals, which added extra magic to the experience. “Muscle Shoals is phenomenal,” says Bedford. “We met a bunch of guys who were in the Swampers, guys who were deeply involved but have no ego. We heard stories about Bob Dylan, Joe Cocker, the Stones… We really feel now that we’re a part of that legacy, and ofthat continuing story.”

The Gentlemen may be a core of five, but they have a musical collective of nearly 20, with various songwriters involved and members swapping instruments in the studio, sharing vocals and joining in whenever they felt inspired, “like musical chairs” Bedford says, laughing.

“We’re so used to getting into the studio and working for somebody else’s vision and making it work for them, that I just wanted us to enjoy ourselves. Somebody would play a song, we’d say: ‘That’s great, let’s record it’, and everybody would find a position to work. It happened so naturally. It was wonderful. We weren’t even thinking about making a great record, but when we played back the mixes it was apparent that we had something special.”

And special it certainly is. There’s southern rock boogie like opening jam Habbie Doobie, the wistful Crosby, Stills & Nash-style folk rock of Bondurant Woman, and songs that sound as though they were transported from another era, like the crooning country ballad My Way or the psychedelic 60s wig-out Shakin’ All Over.

“We love sixties psych rock’n’roll when all the boundaries were being crushed for the first time,” Bedford says. “It was kinda out there and weird, and that’s what rock meant – not a defined genre, not a group of guys making music to try and sell records, but making music because they have a voice and something to say.”