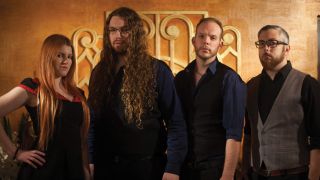 Hemina are a Sydney-based progressive rock/metal band who, when viewed from an overall perspective, pursue a relatively traditional melodic heavy prog sound. However, when their music is examined in more detail, it becomes apparent that they actually take pains to inject a number of different musical elements into their sound in order to separate themselves from the pack. Frontman, lead guitarist and main man Douglas Skene explains the thinking behind such an approach.

“That all comes from wanting to have a different sound to everyone else,” he states. “We don’t want to be just a Dream Theater clone or Symphony X clone. They do their style well enough, and if you try to imitate them you’ll just come across as a worse version of their sound. So we just pick all the different sound palettes that we like the best, so having the brass there and the female vocals gives you another colour, and when we’re writing a song and we’re looking for a particular colour, then sometimes those are the ingredients that work the best.”

Even the band name was selected as a point of difference from other progressive outfits, and is reflective of the vibe that the members aspired to create when they first formed the band almost a decade ago. “When we first started the band back in 2008, I was trying to come up with something that wasn’t just your standard metal or prog name, in terms of being ridiculously heavy. I wanted to have these angelic and ethereal sounds to it too, so I looked up names that related to those kind of words. I found ‘Hemina’ in a dictionary, which is a Proto-Germanic word meaning heaven.”

Something else they try to do to distinguish themselves from many other bands in the prog world is discuss some wildly different themes in their lyrics, generally eschewing most of the more grandiose topics often associated with the genre in favour of a more real-world approach to lyricism. Their third album Venus, which was released in November 2016, is a case in point.

“It’s a big concept album. The whole idea of it is that it’s a concept album around domestic violence in relationships nowadays,” Skene explains. “What kind of things make or break a relationship, when’s the appropriate time to call it quits, and the catalyst in this story was someone who’d been cheated on. I wanted to talk about this because it’s a very relevant topic in the 21st century.”

Skene works hard to ensure that he takes cues from a myriad of different musical sources when crafting Hemina’s epic songs, old and new, from within the prog idiom and without. “I’m definitely not one of those people who writes prog metal and says, ‘I don’t listen to prog metal at all.’ I think I’ve got my finger on the pulse of what’s going on – I’m a big fan of bands that have released albums recently; the new Pain Of Salvation album, the new Haken and Frost albums; then there’s the Australian scene, your Voyagers and Karnivools.

“We’ve got a lot of pop influences as well. I listen to a lot of 90s pop, because that was the era I was brought up in. Even stuff that is as tragic as Backstreet Boys and Britney Spears, I still love it! I’m right into bringing that type of catchy songwriting into the prog world. Plus I like a lot of electronic music, and I try to fuse a bit of that in there as well.”

The band are currently in negotiations to bring them to Europe this year on the back of their stunning Venus album, so Euro prog fans should keep an eye out for the Aussie prog monolith that is Hemina in 2017.

Heavy melodic prog but with an infusion of non-traditional elements

Venus is out now and is self-released