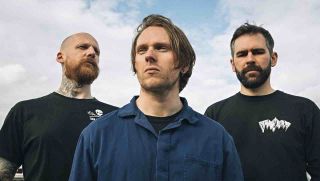 Some bands exist to help the players within make sense of a crazy world, occasionally managing to light a path for listeners who might be trying to do the same. Doomed-out metallic hardcore unit Harrowed fit that bill exactly, rising from their slumber with second album Chaotic Nonentity to provide some stark, withering clarity in these times of chaos and confusion.

“Society is fucking absurd right now,” says vocalist/guitarist Seb Leslie. “Playing extreme and visceral music is helpful, and cathartic. A band can be a vehicle to break through the bullshit and express something true to human nature. Also, plugging into a massive amp or two makes everything better.”

Despite the immediate animal ferocity of the band’s music, it quickly becomes apparent that there’s also a great deal of thoughtfulness bubbling away beneath the surface of the album’s white-hot sonic assault.

“The lyrics predominantly deal with different states of psychological deterioration, meaninglessness and the self,” says Seb.

Indeed, the album takes its title from a book by influential psychiatrist R.D. Laing – a thinker who adopted a more thoughtful, empathetic approach to treating mental illness when vast swathes of the profession were resorting to brutal electroshock therapy.

“It’s a quote from The Divided Self, which was a huge influence on the lyrics of the album,” says the frontman. “There’s a very real and depressing poetic sense to his writing, which stayed with me. I admire the humanisation of mental illness, and I liked the idea of using the quote as an album title, as there’s also a horrific quality to the phrase that conjures up different imagery and ideas.”

Lest you think this mix of venom, hostility and deep ruminations on mental ill health might make Harrowed a miserable and unapproachable bunch of so-and-sos, Seb suggests the truth is quite a different matter.

“We’re pretty chilled,” he says. “I think I can speak for the others and say that doing a band like this helps with personal struggles. When we’re together it’s just fun – it needs to be really, because everything else is annoying and rubbish.”