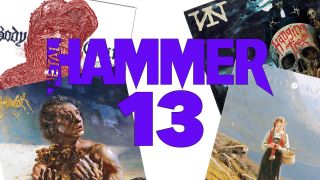 Previously, we brought you The Metal Hammer 11 and that was great and all, but how about THIRTEEN? That's better.

Thirteen is unlucky for some, sure, but us metal heads throw the finger up at social convention. Black Sabbath had some success with their album, 13, and Wednesday 13 loves the number so much he named himself after it. Other than 666 we can't think of a more metal number. So, thirteen it is. Crank your speakers up to 11 and enjoy the sound of our carefully curated Spotify playlist!

Well, you listened, you votes and you chose *drum roll* Frayle and 1692. Check it out below.

This week we've got some fantastically heavy new releases that you might not have heard...

Plus, a whole load more epic tracks to soundtrack your fortnite.

As always, vote for your fave!