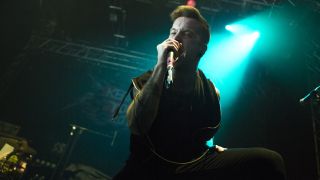 A new week, a new series of Game Of Thrones and not a Bank Holiday in sight. What are you going to do with your time? Well we’ve got the answer!

Anaal Nathrakh: Glasgow, Audio, Wednesday 15th April Possibly the second best band to ever come out of Birmingham (the first is unarguably Sabbath) and proof that Brummies can do extreme metal better than anyone. In support of last year’s Desideratum, Mick Kenney and Dave Hunt return to Glasgow this week to make all manner of glorious racket.

Kyshera: Cardiff, The Globe, Wednesday 15th April Forming in 2005, Kyshera have gradually been chipping away with their unique brand of alternative rock. It’s certainly something that has been winning people over, their recently released new album Circle saw the light of day entirely through crowd-funding. They now celebrate by taking their new album on the road, kicking things off with this hometown show in Cardiff.

Godspeed You! Black Emperor: Manchester, Albert Hall, Friday 17th April One of the biggest names in post-rock, Montreal’s Godspeed You! Black Emperor have been bending people’s minds in delight since 1994. With new album Asunder, Sweet and Other Distress in tow, the Canadian nine-piece all bundle in the bus together to return to our shores for shows that are sure to be awe-inspiring.

U.F.O: Wolverhampton, Wulfrun Hall, Saturday 18th April Going strong since 1969, and still as good as they ever were, proto-NWOBHM heroes U.F.O are back with the recently released A Conspiracy Of Stars. Phil Mogg and co. charge into Wolves this week to play these songs live for the first time, as well as plenty of hits from their colossal back catalogue.

Bury Tomorrow: Reading, Sub89, Thursday 17th April One of the best young bands in the UK, these metalcore upstarts have long-proved themselves as safe bets for a killer live show, and there’s no reason this night at Reading’s Sub89 will be any different. If you’re not running around the pit, or belting out the choruses to the likes of Knight Life and Lionheart you are a wally.

Zoax: The Barfly, Monday 13th April With members from all over the place, we’re very thankful these five chaps found each other. Zoax’s recent second EP, Is Everybody Listening? is a gloriously melodic, yet off-kilter, take on alternative rock. Furthermore frontman Adam Carroll is one of the most animated frontmen in the UK today. Get along to The Barfly and see for yourself.

Hexxed: Belfast, Bar With No Name, Thursday 17th April Belfast prog five-piece Hexxed remain one of Northern Ireland’s best kept secrets. After a lengthy break they return this week to play Belfast’s own Bar With No Name. With this being the release show for new album Hidden Graphs, there’s never been a better time to ensure that they don’t remain a secret much longer.

Anathema: Dublin, The Academy, Thursday 17th April Having recently toured playing cathedrals all over the UK, the haunting prog-rock meets doom metal sound of Liverpool’s Anathema offered a truly one of a kind experience. Now the band are playing shows once more as part of their Resonance tour. Acting as a celebration of the band’s entire career, featuring special appearances from former members, and a setlist packed full of songs from all ten albums, this is sure to be a special night for fans old and new.