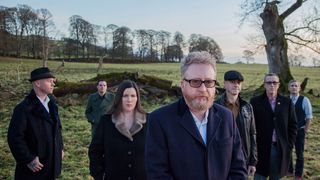 Many pints of Guinness have been raised to the music of Flogging Molly, the lively Los Angeles-based band that mixes folk-punk with traditional Irish sounds. Dublin-born group leader Dave King has penned more than his fair share of pub anthems, and he says that the best drinking songs operate on a couple of levels.

“Drinking songs can get you to party and raise hell, but they can also bring out the tears,” he explains. “There should be a humanity aspect to a good drinking song, something that makes you feel like you’re not alone and that you’re bonded to other people.”

King cites the Flogging Molly song Float as an example: “There’s the line ‘Drink away the rest of the day/ I wonder what my liver’d say.’ To me, that’s not about drinking, really; it’s about emotions and hope. That’s the best thing you can sing about.”

Flogging Molly’s new album Life Is Good is released on June 2, and is available to pre-order now. The band go on tour this week, reaching the UK in late June.

“This is a beautiful song to listen to at the end of the night. It’s wonderful and warm, and the lyrics are quite gorgeous. [Sings] ‘So fill to me the parting glass/ good night and joy be with you all.’ What a great sentiment. It’s a song that casts a glow over you in the best way.”

“What’s not to like about this one? It’s a rousing, rollicking song about revelry and drinking. If you’ve never really heard a good ol’ drinking song, Sally MacLennane is a great place to start. It’s the opposite of Parting Glass, which is melancholy. This one is rowdy and bawdy. It’ll get you going, no doubt.”

“The Dubliners were probably the greatest folk band to come out of Ireland. Seven Drunken Nights is a classic old tune about a man who comes home within the period of a week to discover that his wife has hidden another fellow beside her in bed. I heard it for the first time as a kid, and I always enjoyed listening to it find out what would happen at the end.”

“This is a good one. It was one of my mother’s favourite drinking songs. It’s about a woman who was barred from every pub she’s even gone into, and that kind of describes my mother. [Laughs] Oh, she was a bit of a hell-raiser. Obviously, the song means a lot to me now – my mother passed away a year ago. When I hear it, it reminds me of her.”

“Christy Moore is a well-known Irish folk artist, and this song is one of his best. It’s about waking up with the worst hangover and seeing a world that’s gone fucking crazy. The humour in it is just ridiculous. As an Irishman, it really hits home, although I’m not sure if it travels well. Funnily enough, Christy is a famous non-drinker right now.”

Leonard Cohen - Bird on the Wire

“This might be a bit of an outsider, but I have to put it in. It reminds me of Christmas mass at midnight, how the drunks would go from the pub to church and they’d start singing hymns. I can imagine having a whiskey and listening to it. Leonard Cohen was one of the most beautiful people I’ve ever met. My wife and I were so lucky to have spent some time with him.”

The Pogues - The Sick Bed of Cuchulainn

“The Pogues again – they’ve got so many fantastic drinking songs. The song is about Cuchulainn, who is a mythological Irish hero, but the song also mentions the manager of the Pogues, Frank Murray, who was a great friend of mine. The song takes off like a freight train and it just goes from there. It’s fucking brilliant.”

“I love performing this song. The second the banjo riff comes in, people just lose their minds. But what’s really special about it is, when you read the lyrics you realise that it’s not just about drinking. It’s about the problems that were happening in Ireland when I was growing up. Things are getting much better, which I’m glad about. We’re not just talking about problems; we’re doing something about them.”

The Mighty Stef - The Mero

“I love this version of the song. Donnie Drew is on it, and you’ve also got me and Bridget Regan from Flogging Molly. We all recorded it in one day. Ronnie Drew passed away shortly after we did it – it might be the last recoding he ever did. He was such an influence on me. To be able to sing a song about Dublin with him was really special.”

“I live a few miles from Boulavogue in Ireland. The song is about a priest named Father Murphy, who was part of the rebellion. As an Irishman, this song just breaks my heart. It really sets the tone about what people were going through to get their freedom. It’s not so much a drinking song, but when I have a few drinks in me, it’s what I want to hear.”