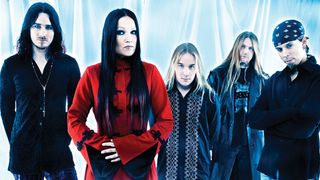 Most successful bands can trace their rise to glory back to one particular moment in time. For Finland’s Nightwish, the undisputed champions of symphonic metal, that moment came with the release of Nemo, the first single to be unveiled from the band’s fifth album, Once. Although they had already established themselves as a major force in large parts of Europe and South America, it was Nemo, released in 2004, that proved to be the band’s major international breakthrough.

As Nightwish celebrate two decades as metal’s most extravagant standard-bearers, we asked founder, creative driving force and keyboard maestro Tuomas Holopainen and former vocalist Tarja Turunen to cast their minds back to the song that brought them worldwide fame. Tuomas explains that it had a painful birth.

“I remember vividly that Nemo is one of the most difficult songs we’ve ever done,” he tells us. “It was really, really difficult to get it to work. We worked with the arrangement for months, just to get the lyrics and melodies completely right. I don’t know why. It was originally two minutes longer and the music was faster, but it was Tero [Kinnunen], the recording engineer, who said, ‘This part is completely stupid. Take it away, and we need to slow this down by about 10bpm.’ We rearranged it again and again. I can’t even remember how it went originally. It must be on one of my floppy discs!”

Many people assumed the song was some kind of tribute to either Disney’s Finding Nemo or Captain Nemo from Jules Verne’s classic novel, 20,000 Leagues Under The Sea, but the truth is that it was inspired by the troubled emotional state that Tuomas found himself in at the time of its composition.

“It was just about a feeling of not being sufficient enough, a feeling of being a terrible person and fucking up everything,” he explains. “We all get those moments every now and again, those weaker moments in life when you don’t really know who you are. You are without a name, without a direction. That’s where the title, Nemo, which means ‘no name’ [in Latin], came from. It’s basically a cathartic song about myself. I was just a much darker person then than I am now. I would never do a song like that again, but that was as honest as it gets. It was a page out of my diary, and I needed to get those emotions out. I felt so alone.”

We now know that Once would prove to be Tarja’s last album with Nightwish, but today she has fond memories of hearing and singing Nemo for the first time, as the lavish and ambitious record was pieced together during the winter of 2003 and early 2004.

“When Tuomas first played it to me, I thought that Nemo was an easy-to- understand song with a beautiful, catchy melody,” she recalls. “I really loved it. It didn’t immediately become one of my favourites, because I generally preferred the longer, more complicated songs in Nightwish, but this song obviously needed to be a single. I always tend to be a little bit more nervous recording a song when you know it’s a single, but the goal is just to get a good take and to make a great song out of it. I had a great time singing it.”

While it seemed inevitable that Nightwish would continue to head onwards and upwards upon the release of Once, it was the release of Nemo and its sumptuous, melodramatic video that gave the band that all-important push into the global spotlight. Costing around €80,000 – a massive amount for a metal band in 2004 – and created in collaboration with Finnish director Antti Jokinen (who went on to direct 2011 thriller The Resident, starring Hilary Swank), the clip received heavy rotation from TV stations around the world. It was a vivid but melancholic portrayal of the band performing amid a snowy, mountainous landscape, Tarja standing out in a billowing red coat. The striking visuals, combined with the song’s irresistible melodies, elegantly augmented by the London Session Orchestra, ensured that Nemo had a vast impact.

“The video was dark, but striking and colourful, and it was very gothic,” she says. “We got a lot of gothic followers after that video! I don’t think Nightwish ever considered themselves to be a gothic band, but we got a lot of appreciation. My friend is a Finnish tailor, and she’s still in charge of many of my outfits. We had this idea for the red coat, a very strong colour against the snow falling. If you think of symphonic metal bands with female singers, they’re usually dressed in black. I was always the weird girl with the weird voice, the operatic vocals, and then I wore this red coat, ha ha ha! I still see girls at my shows dressed like me, so I guess it was really powerful.”

Not everyone was immediately bowled over by Nightwish’s opulent vision, however, as Tarja explains.

“We had an initial ‘No!’ from MTV at the time, because they didn’t want to show a video that was in the snow!” she laughs. “We thought, ‘Why are you showing beach videos all the year round, but you don’t want to show snow falling?’ Some TV stations were not willing to show the video, but it was a big thing for us. Many new people got to know us through that song.”

Released on April 19, 2004, Nemo was undoubtedly the chief catalyst in propelling Nightwish to the greatest of heights. The buzz surrounding the band was already undeniable, but the single’s conquering of the small screen and the then-rapidly expanding online world ensured that when Once was released just under two months later, it rocketed to the top of charts across Europe, and the Finns suddenly found themselves being heralded as 2004’s musical phenomenon.

“I think the biggest news was that it was the best-selling album in the whole of Europe for two weeks,” Tuomas grins. “It was unbelievable. That’s when we said, ‘OK, now we know that something’s going on!’ I don’t really think it got into any of our heads in a bad way. We were just like, ‘Wow! Imagine that!’ There were all these huge names from all over the world and they were beneath us… I thought, ‘What’s going on? OK, let’s just enjoy the ride!’ It was just fantastic. Everybody felt really happy in the band and we’re talking about 2004 now, because 2005 was the worst year for us. But I remember 2004 was just beautiful, the whole year. Everybody was happy with the success and just being happy playing the shows. I remember we played at the Astoria in London. It was the first time we ever played there, and they had a sign outside that said, ‘Tonight! Nightwash!’ I will never forget that! Ha ha ha!”

As Tuomas hints, the overwhelming success Nightwish enjoyed after the release of Once would eventually lead to an acrimonious split with their singer at the end of 2005. But with hindsight, it is clear that the impact of Nemo and its parent album were fundamental to the sustained popularity and commercial potency that the band continue to enjoy to this day. While they had worked extremely hard to realise their ambitions, the reality of becoming big meant that their lives changed at an alarming rate, and Tarja struggled to adjust.

“Yeah, suddenly everyone wanted a piece of us, and it was weird,” she notes. “The venues were huge and that was great, but I don’t know if I got to enjoy that much about it. It was so fast. I don’t know if anyone could really enjoy that. We were in a wind tunnel, you know? We were still young and we’d worked really hard to make our dreams come true, but it was kind of scary at the time. For me to be the only girl on the road, in a way, I was always the one that everyone saw first and wanted to speak to, and the guys would always escape, ha ha ha! There was a lot of pressure involved. It wasn’t an easy time for the band. The success came, but it was hard to deal with it. If you ask me now if I enjoyed it, I can’t say yes, and that’s sad, isn’t it?”

In suitably dramatic fashion, Nightwish and Tarja went their separate ways at the end of the touring cycle for Once. But now that more than a decade has passed, both camps are evidently proud of the music they made together and the longevity they have both achieved due to that remarkable shared success. Nightwish are bigger than ever in 2016 and show no signs of losing momentum, while Tarja’s career as a solo artist also goes from strength to strength. She still sings Nemo, and other Nightwish songs, during her live shows, which says it all about the enduring magic they created all those years ago. Meanwhile, Tuomas is happy to acknowledge that Nemo remains one of the most important songs he has ever written, and a glowing example of how music can change lives and make dreams come true.

“It might sound corny, but you realise that these lyrics and this song are going to be heard by all these people, so in a way it’s sharing the pain and the frustration with the whole world, and that really helps,” he concludes. “When music is so honest, I think it helps the people who are listening to it as well, so everybody wins. That’s the beauty of art in its essence, right there.”

Is this guy the world's biggest Nightwish fan?