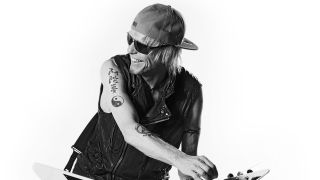 As a guitar hero, how much do you owe to the influence of your elder brother Rudolf?

I was always musically active since I was two – singing, banging drums. But the big thing was when my brother wanted a motorbike for his sixteenth birthday. My parents thought that would be too dangerous, so they gave him a guitar instead. Rudolf asked me not to touch the guitar when he went to work, but of course it was impossible not to. I was immediately hooked. One day my brother came home and heard me play. He couldn’t believe it.

At what age did you realise you were you better guitar player than him?

Did you always want to play in a band with Rudolf?

I think it was always in the back of his mind to have me in the Scorpions. When I was fourteen he told me about this really good singer and introduced me to [future Scorpions vocalist] Klaus Meine. The first song I ever wrote, Klaus put the lyrics to. He called it In Search Of The Peace Of Mind. It was a great song, and his words became the theme of my life [laughs].

Did you receive a lot of encouragement from your parents, Heinrich and Ursula?

Once in a while I misbehaved, and of course the punishment was: “No more music!” But they helped us so much.

Do your parents enjoy your music?

My father died in 1996, but my mother is eighty-nine years old and she loves my first acoustic album, Thank You. She also likes the opening solo of Save Yourself by McAuley Schenker Group. She’s fascinated by how fast it is.

_What’s the best piece of advice your brother has given you? _

I always asked Rudolf whenever there was something that an older brother would know. When I was fourteen I tried hash and it had a very bad effect on me. My brother introduced me to meditation. That really helped.

When you left the Scorpions to join UFO in 1973, how difficult was that for you?

Of course it was hard. But my brother had a vision and I had a vision – two different things. He wanted to create one of the most successful bands in the world, and I wanted to become the greatest guitarist.

Are you and Rudolf very different as personalities?

My brother was always more focused on the big picture, and I was always more introverted, looking at the detail. In the Chinese zodiac my brother is a rat and I am a horse. These are exact opposites. For creative purposes it’s a very good combination, but they say that a rat and a horse should not get married.

And have you ever fallen out badly?

Not really. We are like the yin and yang, as all brothers are. But I know he has always kept an eye on me. We’re different, but we love each other.