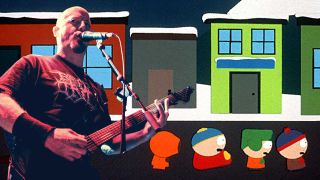 With a theme song written and sung by Primus and a ton of rock star cameos including the likes of Korn, Ozzy Osbourne and Rush, South Park is no stranger to worlds of rock and metal.

Death metallers Dying Fetus are the latest metal act to be featured on the cult adult animation, with their music soundtracking the latest episode, Band In China.

Dying Fetus' song, Second Skin, was used as a plot device in the show, when Stan starts a death metal band, Crimson Dawn, following the neglect of his father, Randy when he starts up a weed farm (classic SP).

Somehow Stan, Butters, Kenny and Jimmy manage to produce an incredibly brutal and professional sounding band (courtesy of Dying Fetus) who get signed and marketed to China.

Our track "Second Skin" was featured on @southpark’s new episode, "Band In China" last night! Watch the episode via @comedycentral and @hulu and stream the track on all platforms. DYING FETUS

Check out the clip of Crimson Dawn below, followed by the real deal...