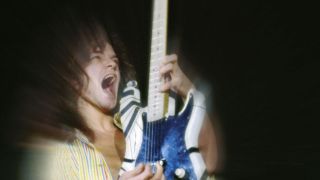 Author Greg Prato’s book Shredders! The Oral History Of Speed Guitar (And More) is an oral history of the shredding phenomenon, and tells the story of the world’s fastest guitar players.

With a foreword by Rush’s Alex Lifeson and an afterword by former Scorpions guitarist Uli Jon Roth, it includes chapters on the likes of Eddie Van Halen, Randy Rhoads, Yngwie Malmsteen, Shrapnel Records, Stevie Ray Vaughan and many more.

In the excerpt below, Kiss guitarist Bruce Kulick talks about the enormous impact of the great Eddie Van Halen.

The first time I heard Eddie Van Halen, I was absolutely floored. I was also petrified. Here’s a guy who clearly understood very, very passionate lyrical lead playing. I didn’t know immediately that he was a fan of Eric Clapton—who is one of my biggest influences.

But I guess that’s kind of why I responded to his playing, and it didn’t really matter if he was going to play very fast—which he could, and that was the intimidating part of his talent. And of course, some of the tricks—between the divebombs or the Floyd Rose whammy bar things and then all the finger tapping. So he really turbocharged the kind of rock lead guitar playing that I loved, and he made me have to ‘up my game.’

But I was really, really freaked out when I heard it, because it was so good, and yet so different and unique to me. Certainly, by the time I got the opportunity to work with Kiss [in 1984], and especially, I remember the conversation when Paul Stanley said, ‘We’re sending Mark St. John home. You’re the new lead guitarist.’ Which I kind of felt was headed in that direction, after about eight weeks on the road with them.

He said, ‘I want you to be competitive with all the guitar players, and do all the things that are popular now with guitar.’ Which is great. It was a good thing from the time that I heard Eddie and from the time I actually had the opportunity to work with Kiss, I did bravely move into that territory. In other words, find a guitar that could have a Floyd Rose on it, see what it would be like to finger tap something, try to play flashy but still with a good melody and emotion—which is something that I always felt people like Eric Clapton, Jeff Beck, and Jimi Hendrix did.

Once I got over the fear and I started to embrace some of the stuff, and I was actually really influenced by the trickery that I would do with Kiss, when I had a solo on Crazy Nights [at the beginning of the song No No No] and I’m doing a whole little hammer-on piece. And no, it wasn’t Eruption, but it had elements of Eddie’s fancy guitar playing, that took lead playing to another level.

I’m still a huge fan, and everything I said about the Eric Clapton connection, I was kind of aware of, but recently in one of the guitar magazines, they shared some audio of Eddie being interviewed and playing note-for-note Crossroads. And it was unbelievable to hear it, because you could still hear that fiery kind of guitar player Eddie is, but he’s still playing it ‘Eddie-style’ but he had all the phrasing of Clapton and all the vibrato down, and that’s why he’s still at the top of the game.

He was one of the guys that all the lead guitar and approach that I want to use came from—guys like Clapton, Beck, and Hendrix. I always need to mention those guys, because they were such a big influence for me growing up. And of course, there’s Leslie West, and the solo that Paul Kossoff does in All Right Now—these are all things that are so important for lead guitar playing. But when it came to going further in time, Eddie Van Halen was the one to take it to the next level, and turbo-charged it.

For me, the Sammy Hagar version of Van Halen really gave the band an opportunity to stretch out in ways I don’t think they ever could have done with David Lee Roth. I’m actually a fan of both versions of the band, but where I’ll hear many people just want to know about the David Lee Roth era, I don’t agree with that.

In fact, in some ways, I think some of the stuff they accomplished with Sammy gave more facets of styles of music and let them explore more musical territory. I don’t think Eddie’s playing changed, it just put him now in another landscape, that was even bigger and broader. But again, I don’t want to take away from what they did initially, because his guitar was huge, the songs were amazing—I still get off on hearing Panama.

But when I think of some of the material that I love from the Hagar version of Van Halen, you had a singer who could really reach high notes—and powerfully. Sammy is just an incredible singer. I had a chance to jam with him at the Fantasy Camp, and I’ve got so much respect for him.

But I thought that the songwriting was able then to be more mature. It wasn’t always tongue-in-cheek, even though they’d have fun with the songs. The element of keyboards—which I had no problem with, even though some people may have thought it was crazy—obviously, they experimented with Jump already, but I think they developed incorporating that in their sound much more so during the Sammy Hagar time.

But Eddie’s guitar was huge, the playing was great, the songwriting was terrific, there’s so many amazing songs. I thought they sounded incredible. There was no downside. Some bands, you change the singer, the whole dynamic gets ruined. And here, it became a whole other animal, that was pretty incredible.

I remember seeing them live—going with Eric Carr to see them—and backstage after the show, they’re sitting there eating lobster and steak. [Laughs] They were always very cool with us. I have a lot of respect for those guys.

This is an excerpt from Shredders! The Oral History Of Speed Guitar (And More) by Greg Prato, available now from all good bookstores and online retailers. © 2017 Greg Prato / Jawbone Press.