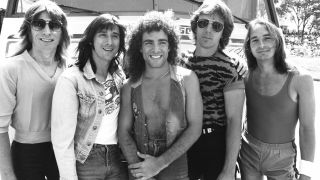 When the screen cut abruptly to black and the strains of Journey’s Don’t Stop Believin’ went silent at the finale of iconic TV show The Sopranos in 2007, it might have symbolised the death of Tony Soprano, but it began a new life for Journey’s enduring classic.

The song’s revival provided an extraordinary new chapter in a fairytale story that began back in 1981 and continues to this day. After its Sopranos-assisted revival, the song became a belated UK Top 10 hit in 2009 (it limped to a paltry No.62 when it was originally released), been streamed almost half a billion times on Spotify and been covered by everyone from Steel Panther to erstwhile teenyboppers Hanson. These days, Don’t Stop Believin’ is a kind of unofficial American national anthem – and it’s thanks in a large part to Tony Soprano.

“That’s the incredible power of mixing music and images,” explains Gary Calamar, whose job as one of Hollywood’s top music supervisors is to find that perfect mix. “That Sopranos scene was incredible, the final scene of one of the best TV shows ever. There was a huge audience with big expectations for the finale. Plus, the song is a great mix of heavy whack hairband rock with Steve Perry wailing his heartfelt and, dare I say, inspiring lyrics.”

Calamar compares the use of Don’t Stop Believin’ with other memorable scenes involving specific songs: Night Ranger's Sister Christian in Boogie Nights, Stealers Wheel's Stuck In The Middle With You in Reservoir Dogs, Sia’s Breathe Me in Six Feet Under. “When you have a big music scene like that it has a massive impact,” he says. “It really gets under your skin and sticks with you.”

The public’s insatiable appetite for Don’t Stop Believin’ was underlined just two years after its use on The Sopranos when it featured in the pilot episode of the TV show Glee in May 2009. The cast’s version of Don’t Stop Believin’ topped that of Journey’s original, reaching No.4 in the US Top 100 and echoed the digital download success of the original, going gold in the US with sales of over 500,000. The Glee cast later covered the song again, resulting in combined sales of 973,000 for both versions. It fared equally well in Britain where the Glee cast’s recording debuted at No.5.

To further emphasise the seemingly limitless affection for the song, in addition to its high-profile inclusion on The Sopranos and Glee, versions of Don’t Stop Believin’ have appeared in – deep breath – Family Guy, Scrubs, South Park, My Name Is Earl, Just Shoot Me, Benidorm, Eastenders, TV Burp, countless editions of The X-Factor and American Idol, Swedish Idol, Australian Idol… you get the picture.

While Don’t Stop Believin’’s 2007 inclusion on The Sopranos is considered by many to mark the beginning of its latest wave of popularity, in an article in the LA Times, Journey’s Jonathan Cain – who wrote the song along with Steve Perry and Neal Schon – cited its use in the 1998 Adam Sandler comedy The Wedding Singer as the spark. Though Gary Calamar, who is also a DJ on LA-based radio station KCRW, begs to differ. “For better or worse I don’t think Don’t Stop Believin’ ever went away. I’ve always felt its cheesy presence.”

Ten years later Sandler and Don’t Stop Believin’ were reunited in Bedtime Stories. In the interim it featured in the 2003 drama Monster starring Charlize Theron. The actress, who was also the film’s producer, had been so keen to include the track that she personally wrote a letter to Steve Perry. After viewing the proposed scene, Perry agreed to the song’s use and even became the film’s music consultant.

The song is in the title of the Journey documentary Don’t Stop Believin’: Everyman’s Journey, while other films to feature it include View From The Top, The Comebacks, Cloudy With A Chance Of Meatballs and The Losers.

Gary Calamar, whose list of credits includes House, Dexter and After The Sunset, understands why the song is featured so regularly. “In a way, using these songs is like batting practice for a music supervisor, you know you have a good chance of hitting it out of the park with one of these old power ballads and a big, over the top scene.”

“It’s a feelgood song with a positive message and a memorable melody,” says Kara Wright, “and it’s an anthem that can be accepted and applied to any kind of situation.”

To back her words, scour Spotify and you’ll come across a dizzying list of artists who have covered the track in all manner of styles, from symphonic metallers Northern Kings to dungaree-clad downhome rockers Hayseed Dixie. There are classical versions, bluegrass versions, acapella versions, dance versions and lounge jazz versions. Scour YouTube and you’ll even come across a reggae cover alongside versions by Panic! At The Disco’s Brendan Urie, John Mayer, Stashrip and even audio of a workout set to the tune by none other than Arnold Schwarzenegger.

Don’t Stop Believin’ is a perennial live favourite, and not just for Journey. During its lifespan it’s been covered by an array of artists. Notable among recent live performances was its inclusion on Kanye West’s set list during his 2008 Glow In The Dark tour while a charity event for the Rainforest Fund at Carnegie Hall in May brought together the unlikely combination of Lady Gaga, Bruce Springsteen, Elton John, Sting, Debbie Harry and Shirley Bassey for an encore of the song.

“I think the revival of Don’t Stop Believin’ can be greatly attributed to the exposure and emphasis that entertainment platforms such as TV, video games and advertising now offer to music – an ideal medium that works well for current and classic titles,” says Kara Wright.

The song’s inspirational message has made it a favourite with sports teams, never with greater impact than with the Chicago White Sox. During the 2005 season the hapless baseball team adopted Don’t Stop Believin’ as their rally cry. The team duly went on to reach the World Series for the first time in 80 years with Steve Perry being invited to attend as they swept the Houston Astros in four games.”

It’s hard to go anywhere these days without being exposed to the song in some form. All across America innocent ‘Stop’ signs have been transformed into Journey tributes with the simple addition of two words.

Wright believes the song’s success paved the way for others. Absolutely, given the digital revolution and multimedia phenomenon, I think it’s an extraordinary time for classic rock songs to find new leases on life. In this way, long-forgotten music will continue to be revived as younger audiences gain new found appreciation for rock history. The universe of catalogues yet to be unleashed is thrilling.”

And what of the men who wrote it? Unsurprisingly, the song closes every Journey show these days, though given its popularity, it would probably induce riots if it didn’t.

Former singer Steve Perry has a more complicated relationship with song. The only times Perry has sung onstage since he stepped away from music in 1995 came when he made guest appearances at three shows with the band Eels in 2014. And while he did sing Journey songs with the group, Don’t Stop Believin’ wasn’t one of them.

But with Perry about to release his first solo album in 24 years, the time could be right to bust out this undying classic one more time – either on his own or with his old bandmates. We can but believe.