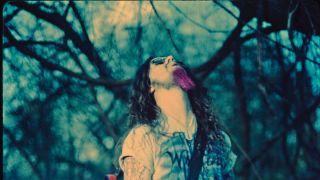 It’s January 1993 and, six albums into a career that had begun more than a decade earlier, Pantera are on their way to becoming the biggest metal band on the planet. Philip Anselmo had been their vocalist for six of those years, and a third release featuring the transplanted New Orleans native, Vulgar Display Of Power, had put the Texas-based quartet on top of the metal pile. In 14 months’ time, Pantera’s defining statement, Far Beyond Driven, would make all of their dreams come true.

Given the contrasting characters within Pantera, the powers-that-be thought it might be interesting to grill each bandmember separately about themselves and their relationship with the others. The results were fascinating. Philip described guitarist Diamond Darrell – he wouldn’t become Dimebag for a while yet – as “an excessive drunk, an excessive white-boy genius and a man hell-bent on having fun at any cost”, but the cultural differences between singer and bandmates were already apparent, bass player Rex Rocker stating: “We like the Dallas Cowboys and Phil likes the [New Orleans] Saints.”

The bottom line was, did Pantera live up to their aggressive image or would they help a little old lady cross the road? Anselmo, Rex and Darrell’s drumming brother Vinnie Paul were affirmative (“Sure… and then I’d ask her to buy me a beer!” quipped Rex), but as for Darrell… read on.

It was mid-afternoon in Texas and the guitarist took ages to surface for his interview. “You didn’t get me out of bed,” he explained, still sounding cheerful. “I’m still in bed.” “How very rock’n’roll,” we replied.“Same as it ever was.”

Just as you’d imagine him now, Darrell’s dialogue was carefree, colourful and punctuated with expletives.

“I kinda live in my own world,” he began. “I don’t really understand a whole lot of that political shit. Maybe enough to get me by, but I don’t really have time for it, man. I’m more into what’s real on the streets than those assholes in suits and ties. None of us – not even Philip – are into that shit.”

Like his brother, Darrell’s main inspiration came from his musician father, who’d taught him the guitar – even if, as Vinnie suggested earlier in this issue, it was not his first choice.

“Vinnie and I went to dad’s gigs and we knew straight away that was for us,” he recalled. “When I was young, I wanted to be Ace Frehley. I’d skip school, stay home and dress up like fuckin’ Ace… put on my Kiss records. My dad got me my first guitar – a Gibson, just like Ace’s. The old man was always right behind me. Sure, he told us about what could go wrong in the music business, but he pretty much left us to make up our own minds.”

Trivialities like getting an education had passed Darrell by completely.

“I tried Sunday school and church once or twice, but those weren’t my kind of people. Fuck, all I’d do was fall asleep. All people there would do was snicker at me because I’ve had long hair since I was six. I wasn’t into school either; I’d be out gigging five or six times a week and we’d be up till four in the morning drinking. I’d hear the bell ringing and wake up in the classroom with slobber drooling out of my mouth. The best thing I ever did in my life was quit school.”

Having been arrested for throwing illegal parties and driving hotrods, his rebellious streak had caused trouble with the cops, especially in his younger days. Mostly, though, his income was legal. Indeed, while Pantera’s early years were frustrating, they had been well paid.

“We made pretty good money playing the clubs,” he admitted. “We’d play six nights week, but pull in around $200. That was a lot more than motherfuckers I knew that worked at the Seven-Eleven. That experience kept the band improving. We worked so hard for so long to pull this together, and then when Philip joined, the chemistry really came together. That’s why this all succeeded.”

It was no great surprise to learn that Darrell was usually behind any tomfoolery in Pantera while also being the living embodiment of a positive mental attitude.

“Whenever anything goes wrong, I’m the guy who can always find something positive from it, or at least suggest something else to look forward to – sometimes even a solution. I always smooth things over.”

And his attitude towards drugs?

“I smoke weed every now and again,”

he replied. “Not as much as Philip, but he doesn’t drink as much as me. I drink quite a bit. I like whisky and Coors Light [beer] and a little weed, but I definitely don’t do cocaine. I trip a little acid now and again but that’s it. No needles – I’m not hooked on anything.”

And finally, would Darrell assist our theoretical lady OAP across the road? Make of the answer what you will.

“It would depend on when she was crossing the street. Fuck it, if I see some bum I’ll be the first to break out a dollar. I’ll open a door for anybody, any time. I’m not always terrorising people. So I might help that little old lady… but sometimes I might not.”

Far bigger than any stereotype, far greater than the sum of any parts and far too young to be taken from us, Dimebag was indeed one in a million. While he may not be with us any longer, we strongly suspect his reign will last for many years to come.