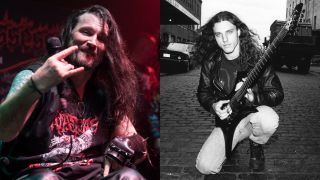 Chuck was diagnosed with a high-grade malignant brain tumour on his 32nd birthday and after a two year battle with cancer he passed away at the age of 34.

During Chuck's tragically short life he established himself as a significant figure amongst the greatest metal guitarists of all time and as a pioneer in extreme metal.

Founded by Chuck in 1983, Death's influence on heavy music is undeniable. The band's 1987 album Scream Bloody Gore is widely considered the first true death metal record and a genre template that defined (along with Possessed's 3-song demo Death Metal) the death metal sound.

The release and his subsequent influence earned Chuck the nickname Godfather Of Death Metal – a title he was uncomfortable with. A liberal lover of life, Chuck fought against the typical metal musician stereotypes, condemning hard drugs and violence.

In fact, Schuldiner changed his band's name to Death after he lost his older brother Frank in a car crash in order to turn the experience into something positive.

It's been 18 years since the world of heavy music suffered this devastating loss, but we will never forget Chuck, Death and the legacy he left behind.

One person who will forever be profoundly touched by the late guitar genius, is his friend, contemporary and mentor – Possessed's Jeff Becerra.

We reached out to Jeff in honour of the 18th anniversary of Chuck's passing, and the death metal forefather was happy to speak to us about why he's so missed.

In fact, Jeff went one step further and penned this touching and heart-wrenching message to Chuck that quite frankly brought a tear to this black-hearted Hammer editor's eye...

I have been asked to write a letter to you discussing “why you are missed”. And of course, the first thing that comes to mind is that I miss you because we are/were friends. I miss hanging out at Krystal’s house and sharing riffs, watching you play your guitar and just basically talking everything “Death Metal”.

You were an amazing talent and a good friend. Even though we were all about “Death” and wrote about the darkness in truth, you were a truly nice guy and really cool to hang out with. I know if you were still alive, we would be laughing at all those magazines and people that act like we were in some sort of “competition” because nothing could be farther from the truth.

I miss our long talks and jams and all the questions you asked and how you looked up to me and at the same time were so unique and individual in your craft. I miss those times when you would be so happy to show me your new music and how proud you were to be my friend, and how proud I was/am of and for your accomplishments.

You were such an amazing friend, talent, musician and fun to hang with. I miss partying out and how you always wanted to show me your latest riff. I wish you were still around so that we could collaborate and make some killer sick shit.

Chuck, you made such a monumental contribution to death metal and metal in general and the world is a better place because of you. I miss you friend, and I will meet you in the left-hand corner of Heaven.

Find out more about the pioneering death metal musician in this rockumentary. The full story of Chuck Schuldiner, his life, death and legacy through the music of Death and Control Denied – now streaming on Amazon Prime.View Deal