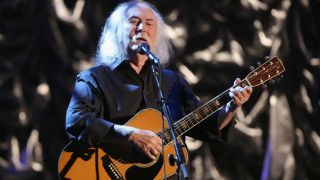 Six solo albums in nearly 50 years is hardly the most prolific output, but David Crosby remains one of the most revered figures of the ‘60s generation. This is largely down to his status as a founder member of The Byrds and Crosby, Stills & Nash (plus various iterations), his consummate harmonies and deft songwriting going hand in hand with a vast appetite for the excessive habits of rock ‘n’ roll. Here are ten of his finest compositions.

Crosby has the slimmest of claims to The Byrds’ most revolutionary moment on record. Essentially the work of Gene Clark and Roger McGuinn, whose Shankar-meets-Coltrane riff dragged the psychedelic age into a new dimension of raga-rock, Crosby is responsible for a few lyrics – “Rain grey town, known for its sound” - about the band’s first visit to London in 1965.

This highlight from Crosby’s first album in 20 years (and best since his unassailable 1971 debut) is both self-admonishing and redemptive, counting off the addictions of his past while setting his shoulder squarely to the future. A nagging electric guitar sets the tempo, burnished with shifting jazz chords and Crosby’s silvery voice.

Recorded just days after the death of lover Christine Hinton in a car smash, Crosby delivers one of the most impassioned vocals of his career, his freak flag snapping proudly in the wind as Stephen Stills and Neil Young complement one another on guitars and Graham Nash gets busy on organ.

Rippling with velvety harmonies, Crosby and Nash share the vocals here, with the former also doubling on acoustic and electric guitar. Crosby explained later that the titular subject is a composite of three women he’d been romantically involved with, one of whom was Joni Mitchell. The song was covered by Miles Davis in 1970.

A tranquil evocation of Laurel Canyon domesticity is juxtaposed with blaring horns and gunfire, the narrative following a conscripted soldier from his last day of freedom to the chaos of a Vietnamese battlefield. Aside from Crosby’s gorgeous melody, the song features some Firesign Theatre effects and a majestically languid bassline from Chris Hillman.

Salvaged from Crosby’s final days with The Byrds, Laughing took on a ringing purity when reconfigured for his debut LP, with monastic harmonies, pealing guitar and an exquisite turn from Jerry Garcia on pedal steel. Garcia’s Grateful Dead bandmates Phil Lesh and Bill Kreutzmann provide the gauzy rhythm, with Joni Mitchell on back-up vocals.

A snapshot of the permissive ‘60s from the free-loving Crosby, for whom monogamy was a symbol of an outdated era. “I don’t really see / Why can’t we go on as three” he sings on this languorous ode to a ménage à trois. Recorded at a time when he was being ousted from The Byrds, Triad didn’t see light of day for 20 years.

An allegorical epic about CSNY’s first break-up, served up as a Wild West tale about four compadres hiding out after a bank job. Crosby is Fat Albert with the 12-gauge, Neil Young is Young Billy the sentry, Graham Nash is Duke the dynamiter and Stephen Stills is Eli, “our fastest gunner, kind of mean and young from the South.” Rita Coolidge is the Indian girl who comes between them.

Crosby’s only A-side with The Byrds is magnificent psych-pop with a rushing chorus and plumes of brass. Inexplicably, it tanked on both sides of the Atlantic, his disappointment compounded by the blank refusal of bandmates Roger McGuinn and Chris Hillman to include it on their album-in-progress, The Notorious Byrd Brothers.

Co-written with Stephen Stills and Jefferson Airplane’s Paul Kantner, Crosby created this “weird science-fiction story” on the Mayan, his beloved boat in Florida. The jazzy delicacy of the opening section elides into a strident chorus with stunning harmonies, while the verses depict a post-apocalyptic future in which a handful of survivors escape by sea to start a new civilisation.