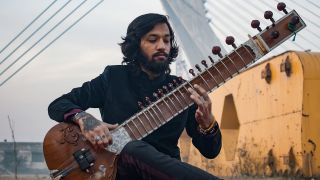 Indian band Sitar Metal have released a video for their song When Time Stands Still. and it's been viewed over 40,000 times in just two days.

Following the success of Bloodywood, with last year's viral smash Ari Ari - the band also drew a sizeable crowd to their debut London show earlier this year - it looks like India might be the next country to step up as the global metal phenomenon gathers pace.

When Time Stands Still appears to be very much part of this movement, with the Indian sitar played using techniques familiar to Western rock fans.

According to the band, Sitar Metal are the "First and only band to be fronted by the limitless Indian instrument, the sitar, combining Hindustani classical and metal music, creating an extremely melodic, chaotic and vast soundscape to reckon with, that is both first of its kind and game-changing."