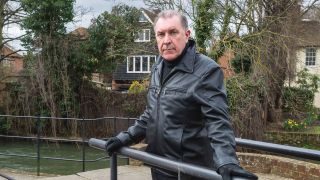 What’s great about The Garden Of Love is that it’s my first proper solo album with a proper record company, and with an advance. This was paid into my bank account the same day as my first pension payment, which I thought was quite something,” says Geoffrey Richardson, clearly amused by the coincidence.

Richardson is best known for his role, since 1972, as the viola player and occasional guitarist and mandolinist in Caravan, as well as being a former member of the Penguin Café Orchestra, a long-time collaborator with Murray Head and Rupert Hine, and a player on innumerable sessions. He’s also recorded two self-released solo albums, Viola Mon Amour (1993) and Moving Up A Cloud with Canterbury-based singer and keyboardist Jo Hook (2011), but The Garden Of Love is the first album to feature his vocals and songwriting.

Things come at their appointed time, it seems, but considering the quality of the songs on The Garden Of Love, it does seem odd that he hadn’t considered this option before.

“Well, in 1963 I was a folk act in the Midlands, just me and the guitar, doing Jackson C Frank, Bob Dylan, Woody Guthrie,” he explains. “I used to sing a lot and I suppose when I joined Caravan in 1972 it just fizzled out. I picked up the threads with this and thought, ‘Let’s have a bash.’”

Richardson recorded the album in his home studio in Canterbury and its songs are set within a luminous instrumental mesh in which he plays all manner of stringed, keyboard and wind instruments, plus percussion. He’s joined by folk luminary Tim Edey on melodeon, and jazz pianist Frances Knight.

The theme is recovery, rejoicing in a way, that I’ve got my life back again.

Richardson decided on an album mainly of songs – there are a few instrumentals – and became engaged in a concerted period of writing, which began to loosely coalesce around a central theme.

“I’m an AA person of 13 years’ standing and the theme is recovery, rejoicing in a way, that I have got my life back again. The real recovery song on it is My Longest Day. It was a pretty severe time in my life, a dark time, and I nearly died. It’s about the day I decided to change everything, and thank God that I did.

“When I wrote The Downs, I’d just stopped drinking and it was an up and down period. That’s one of the oldest songs on the record. I had a beautiful studio on Beacon Hill, on the clifftops outside Herne Bay. I was right at the top of an old building, a lovely loft. I was having difficulty sleeping, and I was looking out over the North Sea and feeling the Earth going round.”

Although the lyrical subject matter on The Garden Of Love might be dark in places, it’s always balanced by yearning melodies and vivid musical settings, so the overall feeling is redemptive. The Downs has a folkish flavour, but that’s more to do with its high penny whistle lines than compositional style. It also carries a chamber ensemble vibe as shimmering strings and staccato Beatlesy cellos make their entrance.

While a song like Alleluia 7 is a celebration of living in the moment, one of the other highlights is England Dear England. With its melancholic refrain of ‘England, dear England, where are you now?’ it feels that there’s something heartfelt behind the asking of the question, but Richardson gives us no answers.

“I was going to put verses in but I thought, ‘There’s some lovely piano playing from Frances there,’ and I wondered, ‘Does it speak for itself?’” says Richardson. “It’s not a patriotic song; it’s slightly ironic. I love my country and I like living in England, but it’s just asking the question and getting the listener to respond.”

The arrangements on the album are inspired and the sonic layering is finely wrought, but Richardson admits it might lack a certain element. “I’ve built up drum tracks from loops of playing and I’ve become very adept at it. It’s a choice,” he says. “I think it was due to the keenness to get on with my songs, but on the next album I’m going to try to get real drums on because of the fun and the dynamics.”

The sweet slide guitar on the album was played on an “absolutely knackered instrument” Richardson bought for a fiver in a Red Cross shop in Whitstable. “I love instruments and can’t stop acquiring them,” he says. But how did he get to learn to play so many different ones?

“I know, it’s bonkers, isn’t it?” he replies. “It’s a genetic thing. My dad was a multi-instrumentalist, a semi-pro musician who played clarinet, guitar and banjo. I’ve always taken it for granted that if you were a musician you would be interested in many different instruments and have a go at anything.

“When I joined Caravan in 1972 I just had the viola with me. I was a guitarist as well, but it didn’t figure in the material we were doing, so for quite a few years I just played viola. Later I bought a flute and a mandolin.”

While a student at Winchester School Of Art, Richardson had played violin in a band, Red Acid, but the drummer – adhering to drummer stereotypes – accidentally broke the instrument. Richardson’s parents gave him some money to replace it, but a cheap viola sounded better than a cheap violin.

There have been few viola players in rock music – John Cale and David Cross, formerly of King Crimson, spring to mind – but although it’s rather considered the Cinderella of orchestral instruments, Richardson likes its lower alto register. In his estimation it fits well under the voices; better than a violin. But Richardson remembers that he and his viola weren’t welcomed with universal enthusiasm by Caravan fans back in the day.

“Caravan was reduced in 1972 to just Pye Hastings and Richard Coughlan. Richard Sinclair had just left and Steve Miller the keyboard player had just left, and so Pye was looking to completely reshape it,” he explains. “People were expecting that the next time Caravan played it would be with Jimmy Hastings on sax and flute. Instead they got me playing the viola, which is pretty off the wall in a way, and I can understand people being a bit surprised at that.”

Although he was recently described to his wife by one fan as “the new boy”, Richardson’s tenure in Caravan has been particularly lengthy. They were one of the earliest of the original progressive rock groups to reform, and have enjoyed a 20-year unbroken spell since re-emerging in 1995.

Caravan are still very active, having been on a cruise with Yes to the Caribbean last year – “The weather was atrocious but never mind,” Richardson laughs – but how do they manage to maintain their level of freshness?

“One key factor is that we’ve never been successful and so there are all sorts of things that can’t go wrong,” he says. “We’re a bunch of committed amateurs in a way, and to me it feels exactly the same as it has since 1972. I think it’s to do with Pye’s dogged Scottish determination: he just will not let go and it keeps us all on our toes.”

“I did two dates with the MAD BAND in Helsinki a couple of years ago. Afterwards Mike sacked us all, saying, ‘It wasn’t what I meant; it just wasn’t right.’

“Back in 1978 I was involved in making his last solo album, Progress [finally released in 2002], engineering and playing a lot of instruments in his studio in Bournemouth. He’s completely eccentric. He had moles on his lawn so he pumped petrol into the mole holes, flooded the underneath of his lawn to kill them and then thought, ‘Fuck it, I’ll light it,’ and blew his lawn to pieces. He was furious and we couldn’t do anything for about two days afterwards!”

Returning to rather safer territory, Richardson plays some of his instrumental pieces in a new trio, Commonwork, with Frances Knight and drummer Liam Genockey. “It’s rather like the Penguin Café Orchestra, which is another angle on what I do,” he says. “And I still have The Orchestra That Fell To Earth with former Penguin Café Orchestra members and playing the PCO music.”

Richardson’s enthusiasm for the new creative tack on The Garden Of Love is clearly tangible. “It’s songs from now on,” he says. “I’m working on the new album as we speak. I’m halfway through. I’m writing songs galore. I’ve opened a valve now. I’d not done rock singing before and for this album I had to learn about singing in the studio. And hopefully, with the circle of friends I have, I can soon play some of these tracks live.”

The Garden Of Love is out now on Esoteric Antenna. See Geoffrey Richardson’s website for more.