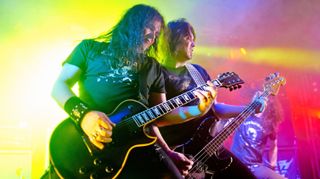 It’s arguably the greatest album title of all time – but Epicus Doomicus Metallicus is far more than a clever twist of language. This is the record that began a doom dynasty, generating a desire and enthusiasm for the music in Europe generally and, more significantly, Sweden that prospers to this day.

“It’s great to know that the album is respected,” says bassist Leif Edling. “Especially as it sold really badly when first released, and we got some terrible reviews.”

From Stockholm, Candlemass were created by Edling, drummer Matz Ekström and Mats ‘Mappe’ Björkman; Edling had previously been with Nemesis, releasing cult album Day Of Retribution in 1984. That same year the Candle flickered into life with their Witchcraft demo, swiftly followed by a second demo titled Studio Garage [“We recorded it in a studio that was literally called The Garage!”]. While these demos spread the word through the underground, it was a third one – Bewitched – that led to a deal with small French label Black Dragon.

“We did this purely to get a record deal. I sent the demo to about ten labels,” recalls Edling. “I know that I gave one to Brian Ross, who was the singer in an English band called Satan. He was planning to start his own record company, but nothing came of it.

“We were keen on Black Dragon, because we loved some of the other bands they’d signed, like Manilla Road and Chastain. So, when they offered us a deal, we were delighted.”

At the time, the band were just the trio of Edling, Ekström and Björkman. With the bassist also handling the vocals.

“Black Dragon wanted me to carry on singing. They liked what I’d done on the demo. But I wasn’t at all comfortable, and my aim was to get in someone permanent. Matz Ekström knew a guy called Johan Längquist, who’d been in various bands around the Stockholm area, such as Jonah Quizz, and he agreed to do the album. I was convinced that once we got hold of Johan then he’d agree to join full-time – but I was wrong. As soon as we’d finished in the studio, he was off again!”

The same problem surrounded the search for a lead guitarist. Christian Weberyd had been brought in for the Bewitched demo, but was soon on his way. Enter Klas Bergwall. “I knew him quite well, and again was aiming to use the album to persuade Klas his future was with us. The problem was that our area of Stockholm was full of great guitarists – you couldn’t move for them. But they were all into AC/DC or UFO. They hated the sort of heavy music we were doing. So, we were in the terrible position of being surrounded by some amazing guitarists, but none of them wanted to know us. Klas ended up like Johan – he did the record and then disappeared.”

With a makeshift line-up, plus a cheque for $3000 from their record company, Candlemass headed for Thunderload Studios in January 1986, and a five-days of inhospitable conditions. The studio was run by the Wahlquist brothers, Styrbjörn and Ragne, members of cult 1980s Swedish metal band Heavy Load. The latter was to produce.

“We wanted to work there, because we’d heard a demo that Yngwie Malmsteen had done at the studio, and it sounded amazing. But little did we know the conditions we were gonna face. It was absolutely freezing in there.” The studio was three floors beneath the ground, in the middle of a subway at the University of Stockholm, and if ever a band suffered for their doom craft, then it was this lot!

“You’ve no idea how cold it was – totally freezing. The radiators didn’t work, which made it even worse. You had to see what we looked like. We were all dressed in fur coats, woollen gloves and long johns. Trying to play guitar with cold hands is almost impossible. I know we’re a doom band, but this was suffering way beyond the call of duty.”

Längquist in particular was hit hard by the extreme conditions.

“He would be doing his vocals, dressed as warmly as possible with loads of layers of clothes, while jumping up and down to keep the cold out, And you could see the steam rising from him. It was weird.

“Plus, we were stone cold sober all the time – with the emphasis on ‘cold’,” laughs Edling. “We knew we had so little time in the studio that there was none to waste. We had to get on with the job, and partying wasn’t on the agenda. Actually, focusing on the recording process wasn’t all that difficult. All of us were used to being in the studio, so we could concentrate. But vodka might have made a difference.”

The band walked out of Thunderload convinced they’d recorded something approaching a masterpiece. “We loved what we’d done. It was so exciting. The record had turned out better than we dared hope, and there was a real air of expectation from us. So, we were crushed when it sold disastrously.”

Released in June, 1986, Epicus Doomicus Metallicus was an immediate…flop. Nobody seemed to be bothered by the fact that it was changing the face of doom.

“We were hammered everywhere. Sure some of the very small fanzines loved what we were doing. But the bigger magazines just slammed us. They didn’t get what was being done at all. However, in the long term, all of that worked in our favour.”

Before analysing exactly how Candlemass turned defeat into triumph, let’s briefly look at the album itself. This was a modern metal album, raw, primitive and full of doom potential. The band weren’t mimicking Black Sabbath, Trouble or St Vitus – they were forging ahead on their own groove. Edling had hoped to open the album with the formidable Demon’s Gate, but was overruled.

“The others thought it was too long and too heavy. Considering that we came up with the equally heavy Solitude as the eventual first track, that’s just bizarre! We wrote Solitude just before we went into the studio. Of the others, only A Sorcerer’s Pledge and Under The Oak had been on demos. The rest were brand new tracks – like any band, we wanted to put our most recent songs on the album, and not re-hash old material.”

Meanwhile, six months after the album had first limped into view and seemingly out of sight, it got its second wind.

“In the end, the failure of the album to sell immediately was such a boost. You see, firstly Black Dragon dropped the band, which allowed us to sign a new deal with Active Records. Then, the metal underground began to discover the album without any media prompting or hype. So, things started to mushroom and explode all on their own.”

By the end of 1986, Epicus Doomicus Metallicus had began to sell in impressive quantities. So much so that, Black Dragon were forced into a second pressing of the record. Then a third, then a fourth…

“It does amuse me, because just before we were dropped, I got a letter from the label telling us that they didn’t owe us any royalties, as the album had barely sold. But they enclosed two IRCs [International Reply Coupons] out of the goodness of their hearts, so we might keep in contact with them. That was worth about 50p! But, when the album really started to shift they were desperate to get us back – too late, we’d moved on!”

These days, the album’s pedigree is unassailable, Edling vindicated by its stature.

“You look at any polls in magazines, and that is always top of the doom list. I think we did help to shape the sound of the genre as we all know it today. In fact, I’m always amazed that so many black metal bands from Norway cite the record as a huge influence. Satyricon, Immortal, Emperor – they all love it, but we also did a lot for Swedish metal in general.

“Before we got our deal, the heavy bands in our country really had no hope. The problem was that, unless you were a band like Europe, Swedish labels didn’t want to know. We proved it was possible to go outside of Sweden and get signed, and it opened the floodgates. Bands like Entombed and Dismember followed suit – and the scene took off.”

All of which leaves one subject to tackle – the title of the album. From what wellspring of genius did that come from? Was it a moment of inspiration? Erm no. Edling reckons it was a flash of sheer – nonsense.

“We’d always called our music ‘epic doom metal’, right? That’s the way we believed our sound should be represented. And then Matz Ekström gave it that Latin feel with Epicus Doomicus Metallicus But when he put that forward as a possible album title, I was horrified. It was just utter shite . Come on, have you ever heard anything worse? The trouble was that there was no obvious alternative. I’m sure we did come up with others, but they must have been so dreadful that I’ve blocked them from my mind!”

So, Ekström’s moment arrived. And there are those convinced that the sole reason the album began to infiltrate the underground was that the title itself attracted an audience. It made people sit up, listen to the record – and the rest is doom mythology.

“I don’t know about that,” admits Edling. “Perhaps in choosing something so preposterous, we actually laid the foundations for our own success. But it didn’t seem so at the time.”

Whatever the truth, the fact remains that Epicus Doomicus Metallicus did open up new horizons for doom, re-imagined the genre and made it cool.

So, is this the greatest doom album ever?

”It’s not for me to say, but I won’t argue with anyone who says that!”

For more Doom and gloom, then click on the link below.

The 10 best doom albums according to Mammoth Weed Wizard Bastard