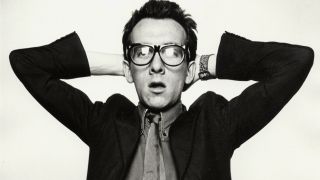 It’s difficult to overestimate quite how startling Elvis Costello was when he arrived at the height of punk in the late 70s. His first appearance in the music press found him drunk on Pernod and speaking of a “little black book” in which he had written the names of every person he believed had done him wrong. “Oh, I’m thoroughly despicable,” said the man born Declan Patrick Aloysius Macmanus.

The subsequent transformation of this Prince Charmless has been matched by few other artists. In the 37 years that have passed since the release of debut album My Aim Is True, his has been a presence of perpetual motion. Over the course of 30 studio albums, the one-time computer programmer from the suburbs of South London has journeyed from the most unsettling of angry young men through terrains that include country music, jazz, soundtrack work and even opera.

Alongside albums recorded with The Attractions – records that no so much defied genre as denied such distinctions even existed – and The Imposters, the now 60-year-old Costello has collaborated with acclaimed chamber orchestra the Brodsky Quartet, New Orleans jazz pianist Alain Toussant, Burt Bacharach and, on last year’s Wise Up Ghost, New York hip-hop group The Roots.

Costello has also served as producer for The Specials, Madness, Squeeze and The Pogues. In 1993 he received a letter from ex-Transmission Vamp singer Wendy James requesting that he write a song for her debut solo album. He considered the question, before strolling to the park and writing her an entire album’s worth of songs – in one afternoon.

Described by Steve Earle as “one of the best singers in the world,” Costello is also renowned for what he sings. As early as 1978 he was baiting the National Front in the song Night Rally (‘You think they’re so dumb, you think they’re so funny, wait until they’ve got you running to the night rally’). Eleven years later he directed his venom at Margaret Thatcher on Tramp The Dirt Down, declaring that when the time came to lower the then-Prime Minister into the ground he would ‘stand on your grave and tramp the dirt down’.

Over the course of a career that now spans five decades, Elvis Costello has gambled with commercial success at almost every turn. As it was in 1977, today his aim remains true.

** **His second album and first with The Attractions, This Year’s Model is Elvis Costello at his most startling. Understanding by instinct that the door kicked off its hinges by punk would soon be reframed and reinforced – and would thus exclude this peculiar-looking and unsettling artist – here the music makes its point with a precision that is fully forensic. Airless and watertight, astute and unforgiving (‘You want her broken with her mouth wide open’, he sings on This Year’s Girl) with songs such as Pump It Up, (I Don’t Want To Go To) Chelsea and the National Front-baiting Night Rally, with This Year’s Model Elvis Costello proved that he was anything but a passing fad.

With a freshly inked worldwide record deal with Warners, Costello decided that his first solo album proper would be an expensive and expansive affair. Recorded in three countries and with a budget he described as equating to that of “an independent film”, Spike is Costello writ large, an album that features numerous guest appearances, as well as two co-writing credits for Paul McCartney. Long-time cheerleaders may have wondered what had happened to the intensity of old (it was still there, just used more sparingly) but others heard an astonishing musical collection splayed across a canyon-sized canvas.

Costello’s debut album is most remarkable for the fact that it was ever recorded in the first place. Even before he’d begun, this was a man out of time: a folkish singer-songwriter who believed The Clash’s first album sounded like “a sea lion barking over a load of pneumatic drills”. Nonetheless, after listening to that record on headphones all night long, the very next day Costello wrote Watching The Detectives, a song that became a classic with immediate effect.

Upon its release My Aim Is True was critically lauded, and rightly so. The collection is also notable for the inclusion of the impossibly bittersweet masterpiece Alison.

Costello’s second album with The Attractions, Armed Forces was the first of the band’s records to attain gold status in the United States. In the UK the record was propelled by the smash-hit single Oliver’s Army, a track that remains his most widely recognised song. This karaoke classic was destined for B-side status until keyboardist Steve Nieve decided to insert the piano trill from ABBA’s Dancing Queen in the spaces between verses and choruses, and a blockbuster was born. The album also includes the evergreen Accidents Will Happen, the deeply sinister Sunday Best, and the Bebe Buell-inspired Party Girl.

In the week prior to the release of Imperial Bedroom – Costello’s seventh album and sixth with The Attractions – his US record label, Columbia, commissioned a series of full-page adverts that asked just one question: ‘Masterpiece?’ At its highest peaks (the gliding menace of Shabby Doll, the Faberge fragility of Town Cryer, to name just two) it’s just that. Equally impressive is the ease with which Costello turned his cheek to the world of Top Of The Pops and hummable hit singles.

Imperial Bedroom also features some of the finest performances to which The Attractions placed their name.

The first of Costello’s albums produced by the now legendary T Bone Burnett, King Of America was not so much a labour of love as it was a complicated and torturous birth. A record of acoustically driven material, its best songs are among his finest – not least Our Little Angel, American Without Tears and Sleep Of The Just.

The Attractions play on just one of its 15 songs, yet were led to believe that this would be a full-blown Attractions record. Such was the ill feeling that greeted this interpersonal impasse that the band began to fracture, and would soon do so with terminal force.

Although Blood & Chocolate would prove to be the last Costello album to feature The Attractions for eight years, it is more than biographical detail that suggests that it was recorded in a vacuum of chaos. With a sound that is not so much raw as serrated, his most conflicted and claustrophobic album features the gruelling I Want You – a song of such unabashed intensity that bassist Bruce Thomas was moved to tell his bandleader that this kind of material should be told to a psychologist, not a paying audience – and the exhilaratingly smart Tokyo Storm Warning.

Blood & Chocolate is a magnificent and unsettling set.

The final album to feature The Attractions (following the acrimonious departure of bassist Bruce Thomas the band metamorphosises into The Imposters), All This Useless Beauty is a swansong as magnificent as it is largely unheralded. The fact that this 12-song set was the last collection of Costello originals to be released by Warner Brothers – who by now seemed no more adept at marketing their artist than a dog is capable of reading a signpost – All This Useless Beauty is a masterwork in both subtle and pervasive arrangements, as well as a spray of songs the range and authority of which is extraordinary.

Produced by T Bone Burnett, the largely acoustic-based National Ransom is noteworthy for the inclusion of Costello’s first overtly political song for more than 15 years. ‘They’re running wild, like some childish tantrum,’ he sings of the banking robber-barons and spivs that sent the world into its worst recession for a generation. Elsewhere there’s a song about a cowboy singer travelling the colliery towns of northern England in the 1930s attempting to find an audience for his unfashionable songs (Jimmie Standing In The Rain).

By this point in his career Costello’s audience knew what to expect from this most restless of artists: the unexpected.

Even so, it would be wrong to suggest that Goodbye Cruel World is a lemon from foundation stones to chimney top. It contains many fabulous songs – Roy Orbison recorded The Comedians, for one, and Peace In Our Time is a beautifully measured political dispatch – but the production and the arrangements mean that the album’s finer qualities are difficult to locate. Goodbye Cruel World also suffers the indignity of being the only album in Costello’s canon that today sounds dated, and often acutely so.

My Aim Is True

My Aim Is True

Tramp The Dirt Down

Taking My Life In Your Hands

The Other End Of The Telescope

All This Useless Beauty