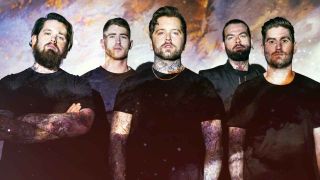 As the frontman of metalcore mainstays Bury Tomorrow, Dani Winter-Bates has been in the game for a while now. Over the past decade-plus, as the band have leapt up through the ranks into the upper echelons of their genre, he’s become one of our scene’s loudest advocates for respecting your fans, protecting the NHS and discussing mental health. We caught up with the frontman to find out how, as a self-confessed introvert, he copes in such an extroverted job, and how his band have survived their darkest moments.

I put on a persona to beat my anxiety

“In the band I come across as quite extroverted because, obviously, I’m a frontman, but as far as one-to-one interactions go, unexpected social situations for me are a bit awkward. In mental health we talk about the mental wellness of persona and ‘masks’, and I have this non-physical mask that I can put on and be ‘Dani, the guy from Bury Tomorrow’. That was what I knew I could do, that was an easy transition; the hard transition was applying that to social situations outside of being onstage. Unknown social interactions are still something I need to think about so I’m in the right state of mind to do that. It’s a bit odd that you can play in front of 50,000 people at Download and call yourself an introvert!”

I won’t let my issue beat me

“I’m glad [my struggles] have happened because to be an ambassador for it I want to know about it. It’s shit that I have constant anxiety or a tendency to be depressed but it’s actually opened my eyes to so much more and given me the ability to use a platform positively, which is awesome. I’ve educated myself on mental health and have lived experience and I just want to let everyone know this is something tangible that everyone can go through and it’s alright to talk about it positively. I’ve gained more than I’ve lost.”

We need to take the conversation further

“It’s easy to send out a tweet saying we should talk about mental health but let’s do it right now, let’s have that conversation. That’s the important bit. It’s not about the should, it’s about the let’s do it now. We need to be looking at statistical analysis. Let’s talk about [male suicide rates being significantly higher than female]. How is that? Why is that? Is it because men don’t talk about it? Let’s look into that. It’s about making those specifics. Certain subjects are easier to talk about now but certain subjects aren’t brought up. We can talk about anxiety now. But when you’re taking about what does being bipolar, having any kind of personality disorder, schizophrenia or psychosis feel like, people still shy away from those subjects. They shouldn’t.”

Bury Tomorrow have always had an old school ethic

“When we first started we didn’t have friends in bands or bands that wanted to take us out, so we contacted promoters ourselves and booked ourselves a five-week tour in the UK because we knew that’s how we would get a fanbase. We started by playing in front of five people, then as we came back down the country, we’d play a show in the same city in front of 20 people. We had that feeling of organically rising rather than being ‘internet sensations’. I don’t think they were a thing when we first started. Not in the metal world, for sure.”

“Bands are so caught up with the perception of being a ‘professional band’. So many bands are hung up on ‘We’re pro now so we all have to quit our jobs’, and that’s not the case. I work for the NHS and have done since I was in this band. I manage to make it work and, yes, we are making good money from the band now, but in the beginning it softened the blow of being able to go on tour and do our thing.”

“For me, as a frontman, my influence comes from who I grew up listening to. I look to Corey Taylor and Jacoby Shaddix, highly skilled frontmen who have played in front of thousands of people. I was an incredibly introverted kid and when I saw Papa Roach, that made me want to be a frontman – Jacoby is the reason that I transitioned into being this extroverted frontman. I’ve met him a couple of times; he said he liked the band and watched us side stage and he was everything I wanted him to be, this personification of rock music.”

We need to protect the NHS

“[The government] can talk the talk. It’s easy to say we should be supporting mental health when you’re cutting budgets left right and centre for mental health support. The Tories do not back the NHS like they say they do; every time they’ve been in power there have been horrific sanctions on the NHS. We’re already starting to see the perpetual motion of privatisation. I’d be fine, I’d get my insurance, but I’m not worried about me. I’m worried about the homeless people in our country, or people who are under the bracket of minimum wage barely surviving. I’m worried about people living with long-term conditions who’d never be insured by anyone. If we privatise the NHS and go to insurance, people will die. Fact.”

“As the British Empire, we have a history of horrific actions we’ve done to others based on their skin colour, where they’re from, their sexual preference, if they’ve got mental health problems or if they’re a woman. We also created the triangular slave trade and we took people out of their homes against their will and put them in another country. How can people hold this Empire up? It’s horrific, and we’re not talking too many years ago really, a couple of generations, that those things were happening. I’d rather ‘British’ transcended into something new than hark back to the ‘great’ old days.”

“When we first uploaded our video for Black Flame online, YouTube compressed and squashed it and made it sound a bit odd. It was because of the way we’d mixed the cymbals. We wanted them to be as hard-hitting as possible so we really ramped them up. Fans had also never heard us with any kind of electronics before. There were quite a lot of people commenting on it, so although we had about 100,000 views on it, we took it down, remixed and remastered the whole record. They’re the people who have listen to it every day, so if they spot something they don’t like, we have to respect that.”

We never gave up

“The end of that year we were like, ‘We don’t want to be in a band anymore.’ It was a year of doing nothing. Over 2011 to 2012 we were told we weren’t worth anything. We were always fed the line: the media won’t touch you and bands don’t know who you are. Then we did Slam Dunk and it was amazing, and then we did Ghostfest. We went out thinking it was going to be our last show, and it was absolutely amazing, the best show we ever played. The crowd was mad and they really supported us. We all were like, ‘We can’t stop, we can’t not do this. We chose to do Lionheart as a single and it all kicked off. Lionheart saved us, really.”

We will always have time for our fans

“We actually structure meeting fans into our conversations with venues and security now that it’s something that’s going to be done. I was at Reading and Leeds festivals for five hours meeting fans. It’s up to them what we talk about, it’s their moment for interaction, whether it’s something deep and meaningful or whether they just want to get a high five and a picture. I have gone off with people before if they need a bit of space because they just want to chat – sometimes it’s just about being an ear. They know I can’t probably give them the advice that’s going to solve anything; they just want an avenue to go down. It’s my job as an individual within the music industry that advocates that attitude towards fans to stick around and have that conversation.”