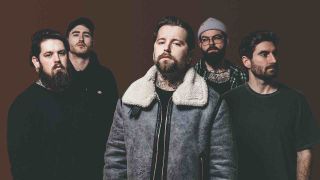 ‘Nothing worth doing is easy’ is a motto that Bury Tomorrow have lived, breathed and bled since they emerged during the height of the metalcore boom in 2006. It’s a grit- your-teeth attitude that has seen them through many a tough time, and you get the sense it might just have got frontman Dani Winter-Bates through today, too.

“We just filmed the video for [new single] Better Below in the studio next door, and we did some submersion tanks,” he says when he greets us today, with a grin that’s half-grimace. “I had to be put in water in a six-foot tank which was… fun.” Was it cold?! “Fucking FREEZING!”

The band’s journey to get here has been slow and often difficult. After almost splitting in the face of industry indifference in 2011, Bury Tomorrow continued to plug away, touring steadily and amassing an arsenal of fans and lightning-sharp anthems. Now, there’s a real sense they’re on the brink of taking a seat at UK metal’s top table. Sensing this, it’s been less than two years since they released their last album, 2018’s Black Flame, but metalcore’s most conscientious workhorses are back on the campaign trail for their new album, Cannibal.

We’ve come to meet Dani at a chilly studio in north London to chat about it. Unsurprisingly, their sixth full-length bears the same glorious hooks and zinging choruses that have made Bury Tomorrow such a beloved force in the metal world. But beneath its super-charged veneer, Dani explains that, lyrically, Cannibal is anything but business as usual.

“Before this album I took a conscious decision to be a lot more honest with people,” he says, still wrapped up in a padded jacket after his earlier dunk. “Our fans know I’ve been on a journey and I’ve been open with them, but I haven’t been open enough.”

Dani’s always been one of our scene’s loudest advocates for the importance of looking after your mental health, frequently using his Twitter platform to post advice and mindfulness tips. And although he says he’s written songs on the topic before, this time he wanted to strip away the metaphors he’d used in the past to mask the true darkness behind his lyrics, discussing the severity of his own experiences. Putting pen to paper was tough, not just for him, but for guitarist and clean vocalist Jason Cameron, who worked with him on the lyrics.

“He had to get into my head and I wouldn’t want anyone to get into my head,” he says. “Having to delve into my darkest moments was tough for him because he didn’t know it was as bad as it was, because I hid it. Even Dav [Winter-Bates, Bury Tomorrow bassist and Dani’s brother] would be the first to admit he didn’t know how bad it got. Dav was like, ‘This is really dark, Dan.’ But it was a point where I thought, ‘Fuck it, if I’m going to go in, I’m going to go in. Let’s not do it half-arsed.’”

To understand these songs, we need to go back to 2016. The band were promoting their fourth album, Earthbound, which had put them back on the radar for many metal fans and on tour with Parkway Drive and Architects. But behind the scenes, Dani was struggling. “[During] the Earthbound cycle, I was my most unwell,” he says. “[I was] quite severely depressed. Anxious going beyond just being anxious, to panic and crisis. I wouldn’t say I was suicidal, but if it had carried on the way it was going… I don’t know. I could not have carried on with the feelings and emotions I was going through for a long time.”

At his lowest ebb, Dani turned things around. He was eventually diagnosed with chronic depression and generalised anxiety disorder. In 2017, he began taking medication and practising wellness techniques such as meditation, which have had a transformative effect. “Getting well” he says, was what triggered him to put pen to paper for Cannibal, and he hopes his honesty on tracks such as The Grey (VIXI) and Better Below will encourage a conversation and tear down the stigma around mental health.

“[The Grey] is a sad song,” he says wryly. “It’s the feeling of hopelessness and being on the precipice of an abyss, feeling like you could fall off. There’s something so fragile and honest about that song that’s different to the rest of the album. We played it on [our 2019] tour, two days before we released it, and it was savage. I’ve never connected with a crowd like it in my life. People sung it, cried it, shouted it.”

Over the last few years, there’s no doubt that mental health has featured increasingly in the social conversation, but there’s a concern that ‘It’s OK not to be OK’ is the new ‘Thoughts and prayers’ – a hollow gesture that barely engages with, never mind solves, the problem. “I’m sick and tired of seeing tweets saying we should talk about mental health and then people close off the doors the minute they say it,” says Dani. “A lot of celebrities out there are capitalising. Promoting a positive message is always great. But by sending a tweet, I felt like I was getting to the point of negligence.”

Dani wanted to go further. As well as penning the tracks on Cannibal, during Bury Tomorrow’s 2019 tour, Dani used his platform on social media to arrange safe space sessions – seven workshops offering people free advice on mindfulness and meditation with clinical practitioners present. “Someone came out as gay for the first time,” he says. “Someone came out as gender fluid. Two people talked about cases of abuse that they had never spoken about in their entire lives. It was powerful and emotive.”

Although he’s just written his most difficult album to date, the Dani we meet today is clearly in a good place. Recently promoted in his day job as an NHS Service Improvement Manager at Southampton’s University Hospital, he looks healthy, happy and positive about the future. Then again, while Cannibal sounds and feels like an album about suffering, really it’s about strength, about taking control. Produced by Sikth guitarist and Black Flame producer Dan Weller (Enter Shikari, Young Guns), and mixed/mastered by Adam ‘Nolly’ Getgood and Ermin Hamidovic, the dream team behind Architects’ Holy Hell, despite its dark subject matter, it’s a great metalcore record and Bury Tomorrow’s most anthemic, accomplished album yet.

“We want to get bigger; we want to be headlining festivals!” enthuses Dani when we suggest that Brixton and beyond, the path taken recently by Architects and Parkway Drive, must be next on the agenda. “I want to be the first person to play Wembley and go and meet our fans after we play and stand at the merch for three hours.”

While Cannibal is certainly set to boot the band up to the next level, there’s a wider trend within metalcore of bands evolving into something bigger once they reach a certain point – take Parkway’s swerve into fire-breathing stadium metal and the technical undercurrents that littered Architects’ later work. Do Bury Tomorrow think they can reach the same heights sticking rigidly to the same metalcore sound they’ve had since day one?

“At 14 years, six albums in, it’d be a bit rich now for us to say, ‘You know what? We’re going to revolutionise ourselves and change’,” says Dani firmly. “We got into this because we were all unified fans of this kind of music. We loved Killswitch, As I Lay Dying, Darkest Hour, At The Gates, Unearth. They were our bands. Now we’ve got bands coming up, emulating our sound, why would we turn our back on it? I think we’ll push ourselves to be better musicians, but I don’t think we’ll abandon our style, because we have thousands of fans around the world who love our music for what it is. I’m not afraid of changing music but it’s not the right place for it.

“Yeah, we’re a great Download, Slam Dunk, Reading and Leeds band,” says Dani, smiling. “But I’m not afraid of anything in this world – only myself and my brain. Behemoth are one of the heaviest bands out there, but it doesn’t mean when you hear us crush into a breakdown, or play [Cannibal opener] Choke live, you’re going to think we’re not a heavy metal band. It’s putting us in front of people who arguably would never have seen our band before, and now we have an opportunity to pack them into Wembley when we end up playing there!”