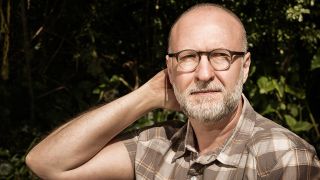 Like many of his peers, Hüsker Dü frontman Bob Mould grew up on classic rock. Zen Arcade’s influences include Pink Floyd and The Byrds, the latter a band the precocious nine-year-old songwriting Mould first engaged with on their fourth album, 1967’s Younger Than Yesterday.

Hüsker Dü – completed by drummer and co-songwriter Grant Hart, plus bassist Greg Norton – covered The Byrds’ Eight Miles High, releasing their cranked-up, jagged and blustering version of the song as a single prior to the release of Zen Arcade, their second full-length. The track was originally recorded as a studio livener; Hüsker Dü didn’t like warming up with their own songs because they would always use the first take of all their recordings as the track’s final version – which goes to some way to explain the urgency of their early work.

“So I’m in the room with John, and he’s tying off, burning more coke down, the works, the water, flick-flick-flick, getting it ready,” wrote Mould. “I’d been around other people in Minneapolis who were shooting coke at the time, so I’d seen all this before. But this is Johnny Thunders, one of my guitar heroes. Flick-flick-flick, gets the air out, slap-slap-slap, on the bottom of the bicep, and shoot. Pulls the works out of his arm, looks at me, says, ‘much better,’ and throws the syringe 10 feet across the room. It lands point-down perfect in a stubby drinking glass.”

Although not a user of hard narcotics himself, Mould was no stranger to alcohol and amphetamines – which all of the band would take to keep themselves going during their frantic touring days. Their first release, in 1982, was a live EP, appropriately titled Land Speed Record – inspired by their colossal, mile-eating US tour regimen and the amphetamine consumption that stopped them giving in to exhaustion. Greg Norton and Grant Hart would later experiment with hallucinogens, and with Mould sticking to amphetamines, the resulting collision of punk and psychedelia saw Zen Arcade veer between breakneck hardcore (The Biggest Lie) and Floydian ambience (Dreams Reoccuring). Hart would eventually progress to heroin, his addiction just one contributing factor of many to the band’s demise in 1988. Hart himself would blame Mould’s autocratic running of the band. As both Mould and Hart were songwriters of equal stature within Hüsker Dü, they would clash over use of songs and so forth. “I looked at it like it was the punk Lennon and McCartney,” said Greg Norton in Michael Azerrad’s book Our Band Could Be Your Life. “Grant was the McCartney, the pop love songs, and Bob was the dark side, Lennon.”

More used to collaborating now, Mould redefined himself as a gay man while working outside the rock world from the late 90s to 2005. He returned to music more at ease with himself, his work and his sexuality: “Everything else opened up – but it’s still a work in progress,” admits Mould. “It’s nice to let go of the reins and not be in control of everything.”

Mould originally discovered his sexuality in the whirlwind pace of the macho US hardcore punk scene of the early 80s where – like any other music scene – pockets of homophobia were still present, despite its apparent liberal and progressive nature. On its own, the teenage advent of sexuality may be terrifying enough to deal with. Multiply that with the early 80s hysteria surrounding the spectre of AIDS. And throw in someone not only away from home and touring for the first time but also discovering his own homosexuality. Even now, Mould seems uncomfortable recalling that baptism of fire.

“To be on tour in San Francisco when either TV or The Bay Area Observer broke the news about the ‘gay cancer’ we’re gonna call AIDS, holy shit… I was confused and closeted… I didn’t identify with gay culture at the time. I had my first boyfriend in the spring of 1983 and we stayed together for six years. I convinced myself that was a safe framework.

Mould later described Savoy taking his own life as “the beginning of the end” of Hüsker Dü. In his autobiography he cites a combination of factors for the suicide: Savoy’s history of emotional issues and stopping taking his medication; the toxic environment of the band; something maybe personal to Savoy of which the band were unaware. By the end of the year, the band had fallen apart, the acrimony between Mould and Hart too deep to resolve.

“It was a combination of relief and shock,” says Mould of the end of the band he’d been a part of between the ages of 18 and 27. “That shock took a while to wear off.”

After years of constant roadburn and full-throttle creativity, Mould opted for a lifestyle at the other end of the scale. He retreated to a farmhouse in rural Minnesota, where he effectively became a recluse.

“I stayed out of everyone’s way – the band, the press – for a good year and a half,” he says. “I had no interest in talking about the break-up of the band. I had no interest in trying to make a case for what I was going through. None of that entered my mind. I just wanted to talk about who I was becoming – rather than who I was. Everybody had it tough as it was. There was no point in getting into an argument about it.”

Following the wreckage and fallout of Hüsker Dü, Workbook was a triumph. Three years later, Sugar’s Copper Blue followed a similarly turbulent period when Mould lost the publishing rights for some of his solo albums. So is it a truism that his best songwriting follows emotional upheaval?

His early 80s peers like REM and U2, plus those influenced by Hüsker Dü – Pixies, Nirvana, Green Day – went on to huge, planet-straddling success. Even hometown Twin Cities rivals The Replacements were signed first, although Hüsker Dü had a stronger following. Conversely, as a cult figure, Mould always missed out on international mainstream household name success – even despite the commercial achievement of Sugar’s Copper Blue. But it’s not something he’s bitter about.

“In the beginning I always wanted Hüsker Dü to be the best band in the world. When I would say that, I didn’t know how to qualify it. If you put us on a stage next to U2 maybe we could smoke them and make people forget about them. As far as selling millions of records? It was never a goal. The objective was more to appeal to someone to be the best band – walking off the stage and feeling you’ve left it all out there. Everything was physical and everybody saw what you did. That changes people. In my younger days, that was the hope.”

With the revisionist nature of 21st Century music appreciation and the luxury of hindsight, Hüsker Dü are now mentioned in the same breath as those bands who overtook them commercially. If you came from another planet and read the Hüsker Dü hyperbole now, you’d assume they were one of the biggest bands of the 80s. But the record sales never matched the plaudits. Does that annoy Mould?

“I’m a huge Hüsker Dü fan, as is anybody from my musical generation,” Dave Grohl tells Classic Rock. “I met him and I said, ‘I just have to thank you. I know you realise I’ve been ripping you off for 15 years, but I just have to say that you’ve influenced me so much and I consider you a hero.’ And he was really cool. He has such a signature sense of melody and composition. He is a legend, an American hero.”

With no intention of fading away himself, Mould’s latest solo work is reminiscent of his best work with both Hüsker Dü and Sugar. Whether he’ll become a household name off the back off it remains to be seen – but seems unlikely.