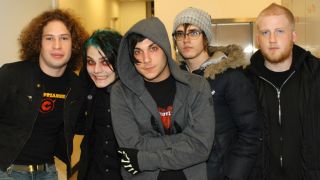 June 8 marked the 10 year anniversary of Three Cheers For Sweet Revenge, the album that really launched My Chemical Romance and one of my favourite albums of all time. This seems like an opportune time to highlight what makes this album so special.

Growing up in the late 90s/early 2000s there was no shortage of unique and interesting characters in the world of rock and metal to capture my attention. The twisted ragdolls that made up Korn, nine masked psychopaths from Iowa going by the name of Slipknot, Marilyn Manson causing the sort of moral panics that indicated he was actually Satan incarnate, or even Fred Durst, who inspired plenty of backwards red caps on the school bus, there was a lot to enthral me, even past the music.

As the trend of nu-metal started to fade away my musical interests stayed firmly rooted in rock music, however as much as I enjoyed the likes of Funeral For A Friend, Rise Against and Killswitch Engage, I couldn’t help but miss many of the larger than life characters that had now been replaced by normal blokes in normal clothes.

When one day I saw a music video that was a compilation of live footage of five geeky guys decked out in black accompanying a song called I’m Not Okay. In many ways sounding like a lot of the pop punk I liked however with a far more emotive tone and razor sharp edge that you’d never hear on a Bowling For Soup album. It wasn’t long before I purchased Three Cheers For Sweet Revenge and a new love affair was born. It had been a long time since a band captured my heart and mind like My Chemical Romance did.

I instantly loved, and geeked out over, how this band was all encompassing: everything was interlinked and their red, black and white motif spread over all of it. The music videos, the album and single artwork and the look of the band all played an important part in making MCR. Whether Gerard Way was decked out in a bullet proof vest or a preacher’s outfit he became an iconic figure.

However all of this would have meant nothing if the music wasn’t much cop, luckily Three Cheers For Sweet Revenge was, in my opinion, one of the finest rock records of the 21st century. A scrappy sound that found the perfect balance between retaining the feel of five friends in a dingy basement without sounding like it was recorded in a tin can. It was also full of huge hooks that showcased the band’s pop sensibility juxtaposed with dark and unsettling lyrics and subject matter.

It was all propelled by Gerard Way and his stirring vocals that couldn’t help but grab your attention, one minute he sounded so emotionally hurt that it could break your heart, the next like a madman who was going to rip the heart straight out of your chest. Whether it was the arena anthems in the making such as Helena or The Ghost of You, or the nasty punk numbers in the form of You Know What They Do To Guys Like Us In Prison or Thank You For The Venom, they all came neatly together to form a contemporary rock masterpiece.

Above all MCR released an album that encapsulated everything that I loved about rock music. Teen angst had a new band to latch onto as growing pains were addressed and handled far better than Kurt Cobain ever did. It was all wrapped in a high concept that really captured imaginations and gave rock fans something to get their teeth into and really become a part of. Here was a band for the outsider, a band for that kid in school who was struggling with life and had nobody to turn to. They embodied a punk ‘Us vs the World’ attitude and stirred the sort of feelings in your stomach that made you feel like anything was possible.

We’ve all heard plenty of “You can do anything you put your mind to” speeches from attractive front men decked out in the latest clothing brand, while model girlfriends watch on from side stage, but it often feels as disingenuous as “You’ve been the best crowd of the whole tour!” However MCR never had to say a word, it was enough to see these five weirdos taking over the world and doing in on their own terms, and Three Cheers For Sweet Revenge is the album that allowed them to do it.

For our interview with MCR circa Three Cheers…. click here.