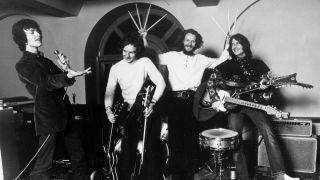 “By the spring of 1969 I had reached a kind of impasses with Traffic. I’d started jamming quite a bit with Eric Clapton at the Traffic cottage in Aston Tirrold, and at his house in Surrey, Hurtwood. One night there was a knock at our door and there was Ginger [Baker], who had got wind of a possible new group. I was all for having him in, and it wasn’t until I read Eric’s book years later that I realised he wasn’t so keen on that idea. That shows you how little we spoke about these serious situations.

Presence Of The Lord live at Hyde Park

“Anyhow, Blind Faith came into being [with Ric Grech on bass]. And there were immediate problems – with egos, with management and organisation. Those are all massive problems for a supergroup. The trouble is, when you start with the idea for a new group you have the whole of your life to figure out what you’re going to do, how to fine tune it and hone the act. Then, if it’s successful your next problem is: what do we do next? You get stuck for a follow-up. It’s all about timing. You have to move very quickly on to the next project and make sure it isn’t a pale imitation of the debut.

“I blame the industry in part, for putting pressure on supergroups, because you’re trying to present a product to the world at large, and every minute you take is money lost as far the business is concerned. They’re so excited with their supergroup, they want more. The result of that pressure is you start making mistakes, because you can’t just throw something together.

“Maybe it was better that Blind Faith lasted for such a short time [ they split up in October 1969], but I loved it initially. At least the record we left, Blind Faith, was pretty good and stands up well. In retrospect; people even think it has a few classics on there, like Presence Of The Lord and Can’t Find My Way Home. So, we didn’t make a bad second album, but we did go on the road. And therein lay another problem. Because of our status – me in Traffic and, more so, Eric and Ginger in Cream - we were booked into big places that were more suited to heavy rock stuff, whereas we were into messing around with tinkling guitars and subtle music.

“The Hyde Park debut, our free concert on June 7, 1969 was in front of at least 100,000 people, but the audience who came had no real idea what we were about. People saw Blind Faith before they heard them. It was a great gig, actually, even though we were still wrestling with the concept. We didn’t really know what we were about. We should have paid more attention to the record, in hindsight. But that’s easy to say now.

“Management was also a problem. Three people had three different managers. Later I realised some awful decisions were made on our behalf. Everything becomes contractual – you appear ‘by arrangement with…’ It becomes business, which is dispiriting for the musicians. It wasn’t easy to resolve.

“It didn’t take long until things came to a head, in America, because by now Eric already had his eye on many other things, like Delaney And Bonnie. And we just sort of disintegrated in the States. Blind Faith only lasted a few months, and by the end of it I didn’t really know where I was going.”

This was first published in Classic Rock issue 146